More
Home Solar Solar Energy and the WECC: Beefing Up the Western US Grid 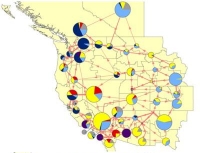 New Hampshire, USA — If solar energy costs come down within goals set by the Department of Energy’s (DOE) SunShot program, solar could contribute a large chunk of the power used by the western regions in North America, according to new research.

The DOE’s SunShot program, based on models from the National Renewable Energy Laboratory (NREL), targets 75 percent reduction in total installed costs for solar energy by 2020, to be at parity with conventional power sources. From this, under the SunShot plan, solar energy could meet 14 percent of the nation’s electricity needs by 2030 and 27 percent by 2050.

Now, a team from the University of California/Berkeley has taken their own model for mapping and optimizing the power grid makeup across the U.S. — “SWITCH,” a rough acronym for “Solar, Wind, Hydro and Conventional generators and Transmission” — and applied it to the Western Electricity Coordinating Council (WECC), which oversees 11 Western U.S. States, the western Canadian provinces of Alberta and British Columbia, and northern Baja Mexico. (Here’s an overview of how their SWITCH model works, and here’s a summary of their methodologies used in this study.)

Their findings, published in the journal Environmental Science & Technology, indicate that if the SunShot targets pan out, solar energy could provide more than a third of the WECC’s energy needs by 2050, displacing natural gas in the medium-term and reducing the need for nuclear energy and carbon capture/sequestration (CCS) technologies. Moreover, emissions levels would be reduced to 80 percent below 1990 levels. Their calculations also assume that no nuclear plants are built, and that there is a coordinated investment across new power generation, transmission, storage, and demand response. Carbon caps or taxes will be needed from the start to incentivize utilities to action, they assert, but such caps would be mitigated by savings in electricity prices achieved through meeting those SunShot targets, which could tally more than $20 billion annually by 2050.

If all that comes to pass, here’s what the WECC grid could look like by 2050, from energy generation to the flow between load areas: 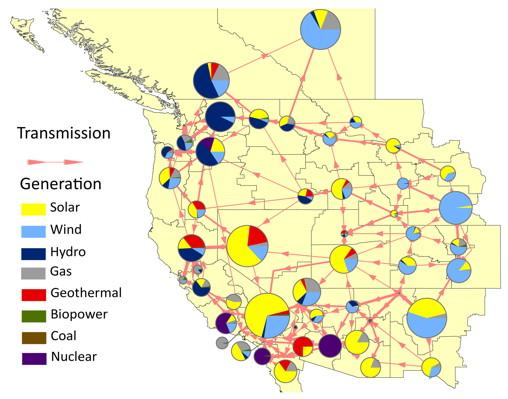 “Given strategic long-term planning and research and policy support, the increase in electricity costs can be contained as we reduce emissions,” stated Dan Kammen UC/Berkeley professor and one of the report’s authors. “Saving the planet may be possible at only a modest cost.”

The findings are reminiscent of other studies, e.g. Mark Jacobson et al. from Stanford, exploring the potential for extensive renewable energy adoption across various states and the nation as a whole. And as is the case in those and other long-term renewable energy projections, a lot has to happen over the next 35 years to get there — and a lot could happen in that timeframe to slow or prevent those goals from being realized.