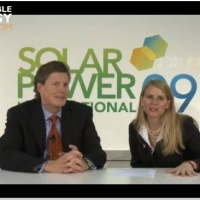 Since solar energy technology is on solid ground and the finance and policy pieces of the puzzle are being addressed through the stimulus plan, all that’s left to make solar energy an integral part of the American energy economy is education, according to Rhone Resch of the Solar Energy Industries Association (SEIA).

Speaking during an interview at Solar Power International, Resch explained that while more than 90% of Americans support solar energy for the country, a full 88% of Americans don’t feel informed about solar, according to the results from the Schott Solar Barometer commissioned by Schott Solar and SEIA. Add to that the fact that 75% of the respondents said that they wouldn’t know how to go about getting solar energy on their homes, “and over 60% said they wanted to put solar on their homes in the next 5 years,” Resch added.

When you put it all together, said Resch, we see “a shocking disconnect between demand and what it’s going to take to actually create that market.”

Resch outlined some of the ways that the solar industry could address this missing education piece.  He explained that a new group was recently formed and announced — The Solar Foundation — with plans address this issue. The Solar Foundation wants to promote solar energy worldwide and will do so, according to its website, though national outreach and independent research activities.

Another answer might just be a national advertising campaign similar to the ones the beef, pork and milk industries have done.  Resch explained that campaigns like that are supported through legislation that mandates a small portion of sales from a product go towards advertising.  That way you don’t have any freeriders, he said.

“This may oversimplify it but for example, for every gallon of milk that you buy, a penny goes to the ‘Got Milk’ campaign,” he explained.  Of course, money is the name of the game as well and right now the industry isn’t in the position to be spending money unnecessarily.  Resch said that the milk campaign is a $100 million dollar advertising campaign.

Until such a campaign happens (and even after it has) Resch encouraged solar companies to get involved at the local level.  He said that even small outreach programs, such as sponsoring a Little League team and putting up a solar scoreboard, are enough to get people stated thinking about solar.  “Get involved with your community to make sure that solar has a presence,” he said.

For the past few years, solar panel manufacturer, Sanyo, has been also taking an education strategy that involves children, according to corporate communications specialist Aaron Fowles. Fowles said that in 2005 Sanyo started an “Environment Education Program” in Japan where representatives from the company go into the schools to teach 4th, 5th, and 6th graders about energy, efficiency and solar.

The company designed its education program to teach kids about solar energy through it’s “Think Gaia” initiative and as part of that initiative, the company built a Solar Ark monument that was completed back in 2001.  The Ark includes laboratories made out of solar panels that serve to teach the community about solar.

Kids in Japan come home after taking one of the classes or field trips to the Solar Ark and start talking to their parents about energy use, he said.  And of course, as they grow up they have an understanding of renewable energy, especially power generation such as solar electricity.  Fowles said that Sanyo has already started to implement a similar program in American schools and has partnered with the California Center for Sustainable Energy to help design and implement it — for now the program focuses on batteries.

He said former or retired educators work at the center to design curriculum around renewable energy concepts, like batteries, which can eventually be used by classroom teachers across the country.

Other companies, like Firestone Energy Solutions, take a different tactic when it comes to outreach.  Firestone, longtime manufacturer of roofing systems has recently launched its energy business in hopes to capitalize on what it sees as the future. When asked why Firestone wanted to enter the solar business, General manager Jeff Henegar, said “Look around,” nodding towards the bustling tradeshow floor at SPI.  “It’s a growing and important industry,” he said.

Firestone’s business approach towards outreach consists of training its customer base in rooftop PV solutions.  The company is implementing training programs to assist its contractors with opportunities in the PV market.  This approach compliments Firestone Building Product’s EnviroReady Roofing system for rooftop PV installation.

Micro-inverter company, Enphase, also spends a lot of time training solar industry profesionals, said Raghu Behler, VP of Marketing for the company.  He said Enphase does regular webinars within its distributor and installer network.  “We spend an inordinate amount of time touching our customers and training them.”

Belur feels that interacting directly with customers is the best way for manufacturers to reach out to communities.

If the Schott survey is correct and within 5 years time many Americans are ready to install solar on their homes and businesses, the U.S. will need significantly more qualified installers to get the job done.  That’s where companies like Boots on the Roof, Solar Energy International and many more come in.

These companies provide training programs so that those who want to jump into the solar industry can get the know-how that they need.

Boots on the Roof’s Jamie Ormond said the company has been growing slowly and steadily since it first started its solar division in 2005.  It offers an accredited 6-day program for PV installers, complete with hands-on training, graded evaluations and certifications.  The company helps alumni network with each other once they have graduated so that finding a job in the industry is easier.

Jane Weissman of the Interstate Renewable Energy Council (IREC) cautions would-be solar installers to perform due diligence before signing up for a training course.

“What we want to make sure is that not everybody with a truck and a ladder and a half-day solar course thinks they can go up on the roof and install,” she said.

She said that IREC has developed a fairly rigorous process for evaluating training programs that incorporates standards developed by the Institute for Sustainable Power — standards that are and used throughout the world in places like China, Southeast Asia and the UK.  When IREC receives an application to review a training program, it performs both a desk audit and an onsite audit to make sure that the course meets the requirements set forth by the standard.

“So if there is training to that task analysis, and all of the different parts of the task analysis are taught to, chances are that’s pretty good training,” she said.

The council provides a complete list of accredited training programs that have won the IREC seal of approval on its website as well as links to more information about entering the renewable energy workforce.

Look for an in-depth article that features SEI entitled “Solar Training: Choosing a Program that Works” next week on RenewableEnergyWorld.com.