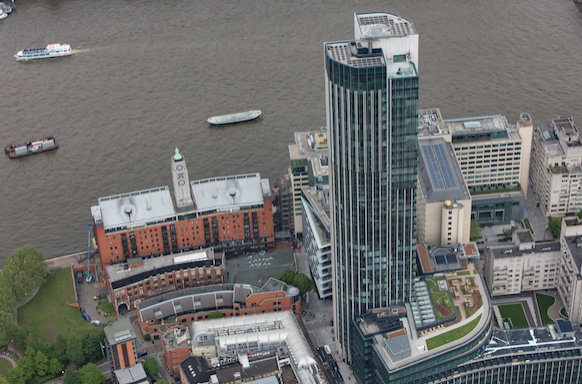 London’s newly-redeveloped South Bank Tower will harness the power of the sun to light up its 193 luxury apartments, shops, restaurants and bars after a solar array was installed on the roof.

The 1970s skyscraper — formerly known as King’s Reach Tower — was once home to one of the biggest publishing companies in Europe, IPC Magazines.

After being derelict for almost 10 years, it’s now been transformed into luxury apartments, 370,000ft² of office space and 72,000ft² retail space — complete with a 100-panel, 26 kWp solar PV system on top. Another 11 floors were added to the building during the process, taking it up to 42 storeys in total (155m).

The system, developed and fitted by Nottinghamshire-based EvoEnergy, comprises 50 Solarworld 260 panels on the 41st floor and 50 on the 42nd, making it one of the highest solar installations in the UK. It is expected to generate 22,400 kWh per annum; saving the tower around 11,850 kg of CO2. 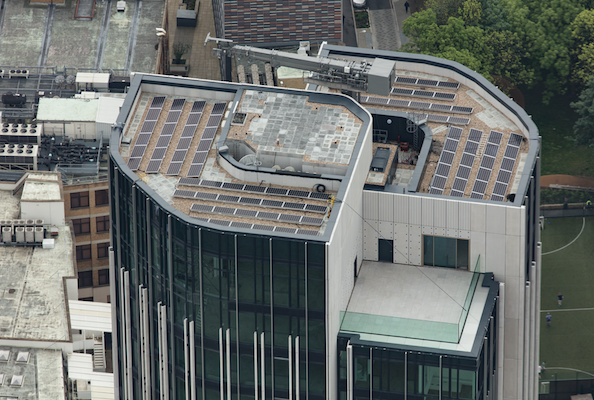 James Fuller, project manager at EvoEnergy, said: “Getting a solar system on top of a building this high is a complex process; it brings different challenges to an installation, on say, a two or three story building. There’s a lot of planning to be done around the logistics of the project, and once you’re up there you’re having to contend with the ever-changing British weather — there were a few times we had to stop working due to the high winds!

“The finished solar system looks fantastic and really complements the building’s new, modern look. Not only is it going to help reduce the tower’s annual energy costs, it’s also an attractive feature which may appeal to those looking for eco-friendly features in their new home.”

South Bank Tower is nestled in-between two iconic bridges: Blackfriars and Waterloo, and forms part of the on-going regeneration of South Bank. It has been developed by CIT, a London-based private and independent real estate investor and developer and Jadwa, an investment bank based in Saudi Arabia.

EvoEnergy was awarded the work by construction contractors Mace Group, who the firm has worked with since 2011.

Shaun Tate, Mace project director, said: “It’s very important to Mace that we use sustainable and energy efficient methods whenever possible so using solar power technology on this innovative, modern building just seemed like the right fit. We have to think about the end users of the buildings that we build so this will benefit the residents of South Bank Tower and I’m very proud of what the whole team has achieved here.”

Steve Riddell, director of developments at CIT, added: “CIT is very pleased with the completed South Bank Tower. Everyone who worked on the project delivered a very complex construction project which entails extensive re-use of existing structures, basement construction adjacent to 100 occupied flats, new built construction and an 11 storey extension of an existing 31 storey tower. It also includes mixed uses – office, retail and 193 luxury flat that will benefit its energy efficient model.”