If I were a newsboy, here’s the headline I’d shout out on the street corner this afternoon: “Single-family solar power beats Standard & Poor’s 500, in 46 out of 50 American cities!”

In fact, a just-released report finds that for owners of single-family homes, solar power’s likely a better investment than plunking hard-earned cash into the Standards & Poor’s 500 stock index; that index has returned about 6.6 percent per year over the last 25 years. The report, Going Solar in America: Ranking Solar’s Value to Consumers in America’s Largest Cities, doesn’t just detail the benefits of homeowners’ investment in solar, either. It also walks them through the process of evaluating what a solar purchase can do for their personal bottom line. And it connects them to resources like EnergySage and Geostellar that can help them find solar installers and financing at competitive prices.

But maybe the report’s most important contribution is its finding that in 46 of the country’s 50 largest cities, buying an average-sized, 5-kilowatt solar power system for a single-family home and financing it at 5 percent over 25 years is the smart financial move for people looking to cut their electric bills and get profitable and stable returns on their investments. If the environmental, public health and job-creation benefits weren’t enough, we can now add financial gain as another reason that solar makes “cents.” 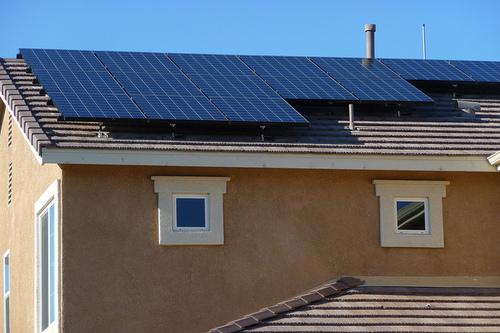 Want a great return on your investment? Try solar at home. With financing, over 25 years,it can return more than the S&P 500. Credit: Thomas Hart.

Of course, you might wonder how this is even possible, given what we hear all the time from some politicians about the high cost of renewable energy.

Well, to begin with, as Going Solar documents, the price of solar has nosedived in recent years. That’s thanks, in large part, to government policy support that we have worked so hard to advance. These government incentives have spurred demand, sped economies of scale, and driven both investments in technology and competition in the marketplace. So low is the cost of residential solar these days that the average, 5-kW system can be had, depending on where you live, for about the same price (financed) as a new Toyota Corolla — $16,000-22,000. Already, the price of solar has gotten so low that solar power is cheaper than grid-supplied electricity in 42 of the largest U.S. 50 cities, again assuming a solar system is financed at 5 percent over its presumed 25-year lifespan, Going Solar‘s authors found. (If you were to buy a system outright, i.e. “all cash,” solar would achieve what we wonks call “grid parity” — solar power at the same cost as grid electricity — in 14 out of these same 50 cities.)

To better understand why solar’s such a good financial investment, you can add to all that improving state and local government policies in areas such as interconnection (hooking systems up to the grid), net metering (selling excess electricity to the grid at a fair price), and permitting that have helped bring prices down and have further roomr improvement.

Of course, if you’re not a homeowner but a tenant, or you’re a homeowner whose property can’t accommodate solar, increasingly, there’s no need to feel left out. A growing number of states are changing their laws and policies to make possible shared, offsite solar installations that are sometimes called “solar gardens” or “community solar.” Shared solar enables tenants and others–low-income people as well as middle-class households–to jointly own or subscribe to, sometimes on a month-to-month basis, solar power systems that tap into the clean and profitable power of the sun.

What’s good for our wallets is also good for us as a society, in this case. Residential solar systems and community solar can help utilities, states and regions cut, at a low cost, the carbon pollution that causes global warming, and comply cost-effectively with the EPA’s plan to limit greenhouse gas pollution from existing power plants.

No matter how you pay for it, though, solar’s a great investment for all of us these days — an investment in our financial future and in the well-being of our kids and our planet. That’s news worth shouting from every street corner.