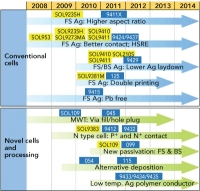 “The c-Si solar materials market in 2011 was a very, very strong start to the year followed on 2010, which was an incredibly large growth year,” said London. “The fist quarter of 2011 was probably too strong.” The market has seen a slight fallback in the second quarter compared to the first quarter, he explained, but the third quarter is seeing an increase again, although not at the rate seen in 2010. “I expect 2011 to show a small increase from 2010 in total — maybe between 10-15%. In 2012, we’re forecasting growth to be in the 15-20% range, as far as cell production output (i.e., wattage).” London noted that with respect to the company’s silver paste product line, these market numbers might translate into no growth because reduced silver usage is now an achievable target with some of the new pastes that are moving into the market now.

“The price of silver has been a large negative driver [for metallization pastes],” said London. In the 18 months, silver has gone from $15/oz to the mid-40s — it hit a high of $49/oz about two months ago — falling back but now trending up again, he explained. These kinds of prices make the photovoltaics manufacturing industry more careful and efficient about usage.

While PV installation incentives in some countries (e.g., US and China) are increasing, some of the economic issues in Europe are resulting in difficulty in sustaining incentives such as feed-in-tariffs (FIT). “Overall, the largest positive market driver is the cost of standard electricity-generating materials such as oil,” London points out. Another driver is the fallout from the nuclear disaster in Japan, which prompted governments from Japan to Germany to scramble to replace nuclear plants with other energy sources. Solar a very fast ways to replace nuclear power, noted London.

Heraeus’s decision to expand in Singapore seemed to be relatively straightforward. Singapore has a well educated workforce, protection of IP, and a good distribution hub for Asia, as well as assistance with constructing the site itself (finding a site, getting people, dealing with the construction team), said London. Cash incentives didn’t prompted the decision to go with Singapore. Rather, it was the “package” that drove the decision. Praising the level of competency of the Singapore construction crew, London noted that “ground was broken the end of February (this year) and we began operation and small scale production the first week in July.”


In the podcast, London also discusses the requirements for next-generation metallization pastes (see the figure above), which need to have very low loss. That translates to a reduced contact resistance and sheet resistivity. And the materials must use less silver — either using a silver substitute or just using less silver, making finer lines or higher aspect ratios in the print. The new materials also need a wide process window, said London.