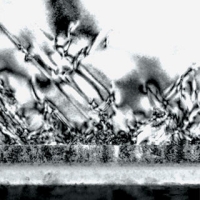 “We are not using a new or unique material, but instead we are using a known material (silicon), and combining it with a unique technology to make high-efficiency, low-cost solar cells that, once fully developed, will be competitive with traditional, non-renewable energy sources, such as fossil fuels,” said Findikoglu. Solar cells based on Findikoglu’s ACSi film technology research are estimated to exceed 15% efficiency, proving that ACSi solar cells have the potential to match the efficiency of bulk crystalline solar cells. Also, it is estimated that optimized ACSi solar cells will cost 40% less than single-crystal solar cells. “ACSi films can be manufactured in large sheets and rolls using fairly conventional manufacturing techniques,” Findikoglu said. “The fact that we can manufacture this highly organized, highly efficient silicon-based material cheaply and in large sheets and rolls leads one to think about unique applications such as gigantic solar cells.” Findikoglu said he envisions large-area solar cell sheets that can be integrated in buildings, like the roof of the Astrodome in Houston, Texas, with the ACSi technology serving a dual purpose of providing coverage while generating electricity for the entire complex. Information provided by Krystal A. Zaragoza of LANL