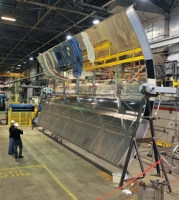 Minnesota — Glass or metal? That could become an increasingly important question for developers of concentrating solar power projects.

A growing number of companies, from 3M to Abengoa Solar, are working on mirrors made of metals and polymer that aim to be lightweight and cheaper than the glass variety. 3M is doing a pilot-stage launch of its Solar Mirror Film, and it’s planning for a full commercial launch by the end of the year, said Daniel Chen, business development manager of 3M’s renewable energy division.

“Saving time and material costs are the big advantages,” Chen said during a recent poster session at 3M’s headquarters in Minnesota. Metallic films “also are easier to transport – you can pack them densely and use aluminum locally” for project construction.

Like GE and other titans in their industries, 3M is keen on winning a fat slice of the growing renewable energy market. The use of metal film, which is then laminated onto an aluminum backing, isn’t a new concept, and 3M launched a similar product in the 1980s. It lasted for 4-5 years before the entire market disappeared, Chen said. The company restarted the research in this area about two years ago, when the solar industry began to revive in earnest.

Proponents say metal mirrors are suitable for all types of solar thermal power plant designs, including parabolic trough, power tower and stirling dish. But replacing glass, a durable and highly reflective material with a long history of surviving the outdoors, won’t be so easy. Investors and utilities tend to prefer well-proven technologies over novel ones. The largest solar thermal power complex in the world, the 354-megawatt solar field in the Mojave Desert, was built between 1984 and 1991 with glass mirrors.

“If you are going to finance these systems, banks want these things to last at least 20 years probably longer 30 years. Most glass products have some of that history,” said Mark Mehos, the program manager for concentrating solar power research at the National Renewable Energy Laboratory in Colorado.

Where is the Market?

The system (shown left) uses rows of parabolic trough collectors — 160 collector modules spanning about 22,720 feet — on 1.7 acres. The collectors concentrate and direct the sunlight to heat up tubes containing a mix of water and anti-freeze, which in turn transfer that heat to a 16,000-gallon water tank. The water is heated to up to 185-degree Fahrenheit and used for showers, cooking and laundry by roughly 1,000 inmates and employees.

Metal mirrors are better and cheaper options than glass mirrors because a hot water system doesn’t need to achieve the kind of high temperatures that are necessary for electricity production, Thompson said. The project should cut natural-gas use for water heating at the prison by more than 50 percent per year, according to Spain-based Abengoa.

3M and other solar thermal technology companies are eyeing not just the industrial but also the electricity market, a potential mother lode. Gigawatts of solar thermal electricity projects have been proposed, particularly in California, Arizona and Nevada (here is a list of California projects). In a solar thermal power plant, the heated fluid is used to generate steam, which then drives a turbine.

If those projects are successful, they will help to create a large market for new technologies. But lining up investors for these projects has been a tough challenge for power plant developers. So far, the federal government is willing to support two financially. Abengoa Solar recently won a $1.45 billion in federal loan guarantee for its 250-megawatt Solana project in Gila Bend, Ariz. Earlier this year, California-based BrightSource Energy won $1.37 billion in federal loan guarantees for its 400-megawatt Ivanpah project in the Mojave Desert of California.

Aside from using 3M’s reflective film, Abengoa Solar also is developing its own alternative to glass mirrors. Back in 2007, the U.S. Department of Energy gave Abengoa $448,000 to work on a polymeric reflector (see DOE report). The company is working with Science Application International Corporation (SAIC) in Virginia to develop the new silver-lined aluminum mirrors.

Meanwhile, some companies already have launched commercial products. Alanod Solar, for example, has an aluminum reflector that has been used by customers such as Sopogy in Hawaii. Pennsylvania-based Alcoa, meanwhile, recently announced a field trial of a parabolic trough system at NREL using Alanod’s mirrors. A trough collector featuring Alanod Solar’s mirrors is shown at left.

Startup SkyFuel in Colorado also sells parabolic trough aluminum reflectors, which are lined with a silver film developed by NREL and commercialized by ReflecTech. SkyFuel also has received $435,000 from the DOE to design solar fields with Fresnel lenses and molten salt as the heat-transferring fluid, a design that the company said can achieve higher temperatures than Fresnel designs currently available.

Mirror, Mirror On the Wall

Are metallic film reflectors better than glass? Glass, in general, can reflect a higher percentage of light, particular if it’s thin. A glass reflector that is 1 millimeter or thinner could achieve 96 percent of reflectivity, Mehos said.

Mehos sees metal mirrors as a more competitive alternative for building parabolic trough systems for now. For one thing, the glass sheets cut for parabolic trough collectors tend to be thicker, around 5 millimeters, so their reflectivity is lower, around 94.5 percent. Besides, making curved mirrors isn’t easy, so the number of suppliers is limited, which in turn can drive up the cost, Mehos noted. Plus, glass can be heavy and bulky to transport.

In comparison, a power tower design can use flat and thinner glass mirrors, which are cheaper than curved ones. The mirrors in this setup concentrate and direct the sunlight onto the top of a central tower to generate steam, which is then piped to a turbine for electricity generation.

3M and other developers aim to close the reflectivity gap by tinkering with their recipes to create different coatings and by experimenting with different materials. 3M’s film comes with an acrylic top, below which lies a layer of silver, which is a good choice of reflective material. Underneath the silver is copper and other protective layers. The film is bonded to an aluminum substrate to form the collectors.

The company uses an additive to make acrylic more resistant to UV-ray damage. A mirror’s effectiveness depends on its ability to reflect light. 3M’s film can achieve 94.2 percent of reflectivity, with 95 percent of specular reflectance, Chen said.

Although silver makes a good reflective material, it also needs special coatings from corrosion. It can be scratched by dust storms or even during cleaning, Mehos said. Developing a hard top surface to protect the silver is a key pursuit for companies such as 3M. Chen said 3M is developing a more abrasion-resistant film that it plans to roll out late next year.

Alanod takes a different approach with its reflectors. The company forgoes using a silver-based laminate and opts to add other types of coatings directly on aluminum to boost the reflectivity of the aluminum. The coatings include a layer of silicon dioxide and titanium dioxide, Sabel said.

On top of the oxide layers is a gel that hardens, and this secret sauce is crucial for achieving that necessary durable surface, Sabel added. Alanod has deployed its aluminum reflectors in field trials for the last five years. Sabel declined to say where, except that the mirrors are among traditional concentrating solar thermal systems. Alanod’s aluminum version is holding up against the glass variety, he added.

Alanod’s reflectors can achieve 90 percent reflectivity and 88 percent specular reflectance. He said the measurements show what the reflectors could achieve when they are installed in the field. Reflective films, on the other hand, may have higher ratings, but they could lose some of the reflectance if they are not laminated onto the aluminum substrate correctly, Sabel said.

“Glass breaks, and it cannot be used as structure members of the systems. So people are looking at metal mirror’s flexibility and light weight and [they] incorporated it into a structure element,” Sabel said. “With metal mirrors you sacrifice a few points of reflectivity but you get design flexibility.”

Skyfuel’s reflectors also make use of a silver polymer film that goes on top of an aluminum substrate. The company’s spec sheet says the mirror’s solar reflectance and specular reflectance are both 94 percent.