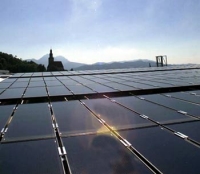 Los Angeles, California [RenewableEnergyAccess.com] Last week Royal Dutch Shell’s prominent solar division bowed out of the crystalline solar industry, agreeing to sell all of its yearly solar crystalline production capacity to SolarWorld. The move represents SolarWorld’s increasing global footprint as it seeks to expand beyond its own borders in Germany to other promising markets such as the U.S. It also, however, represents one of the first major industry reshufflings that can be attributed to the crippling shortage of raw material for the photovoltaic (PV) industry.