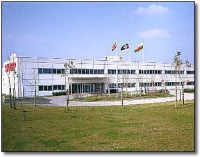 North Wales, United Kingdom – July 14, 2004 [SolarAccess.com] Sharp Electronics, which leads the world in total solar photovoltaic (PV) cell productoin, has officially opened their first solar module manufacturing plant in Europe, based in Wrexham, North Wales. The facility will assemble mono crystalline and polycrystalline solar modules for residential and commercial installations. Annual production for 2004 is predicted at 20 MW and it is planned to double the capacity in order to meet the expansion of the demand for PV in Europe. The opening of the new plant in Wrexham is part of Sharp’s global strategy to capitalize on the increasing worldwide demand for solar products. “Solar is one of Sharp’s global, strategic priorities,” said Toshishige Hamano, Corporate Senior Executive Director and Group General Manager International Business Group of Sharp Corporation. “After establishing plants to service markets in the US and Pacific Rim regions, the next step was to open a facility within Europe.” In June 2004, Sharp Corporation announced the expansion of solar cell production lines at its Shinjo Plant in Nara, Japan to 315 MW per year, in order to meet the burgeoning domestic and international interest in PV modules. In May 2003, Sharp began solar module production in its manufacturing facility in Memphis, Tennessee, assembling solar panels for residential and commercial use. “The expansion of production in both Japan and the US clearly anticipated the increasing demand for solar products,” Hamano said. “We expect the European market, in Germany and the UK in particular, to mirror this growth. Sharp Corporation has a global strategy to supply products locally where possible, particularly, as in this case, it is an area of significant expansion.” Hamano said Sharp intends to maintain its position as the world’s number one manufacturer of solar cells, which it has held for the past four years, and the corporation’s performance within Europe is integral to this policy. In 2003, Sharp held a 26.6 percent share of the global market for PV. Hamano also announced that a second production line would be introduced this October bringing the facility’s annual capacity to a total of 40 MW. The manufacturing facility at Wrexham currently employs 475 staff of which 63 are employed in the new solar module facility. It is hoped that with the expansion in the use of PV, employment numbers will increase in the future. In conjunction with Sharp’s announcement, Solarcentury, a major UK-based solar solutions company, announced a product-development and distribution alliance with Sharp. Solarcentury said they would be Sharp’s preferred customer/distributor for projects in the UK. “In the 18 months since the introduction of the government’s &pound20 million Major Demonstration Program, more and more people and institutions are realizing the unique value offered by solar PV,” said Jeremy Leggett, CEO, Solarcentury. “Our aim as an independent knowledge company is to innovate at the cutting edge of the coming solar business revolution with carefully chosen partners manufacturing a range of cell technologies.” The London-based solutions company has also begun a program of joint product development with Sharp for the construction industry, marrying its knowledge of the PV market and customers with Sharp’s PV manufacturing strength. Sharp Corporation began research and development in solar energy in 1959 and in 1963 began mass-production of solar cells.