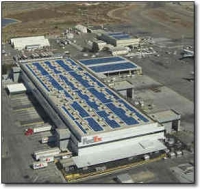 Memphis, Tennessee [RenewableEnergyAccess.com] What do the U.S. postal service and FedEx have in common besides shipping mountains of mail every day? They both recently committed to installing large solar electric projects as a way to clean up their operational footprints.

Just days after a 403 kW solar PV carport project was completed at a U.S. Postal Service (USPS) facility in West Sacramento, a FedEx facility in Oakland announced ambitious plans for a solar electric project nearly a MW in size. Just like the USPS project, the FedEx solar installation will be designed and constructed by the Berkeley-based PowerLight company and PV modules will be provided by Sharp. The project will be located on top of the hub of the Oakland, International Airport will be the largest corporate-owned solar project. “With this project, FedEx will deliver more environmental innovation to California,” said Mitch Jackson, who is the managing director of corporate and international environmental programs at FedEx Express. “From hybrid electric delivery trucks to solar power, we are proud to lead our industry in committing to real, practical ways to reduce pollution, conserve fossil fuels, and contribute to a greener world.” The 904 kW solar array will provide approximately 80 percent of the peak load demand for the company’s Oakland facility, which employs 1,700 people. The electricity generated by the array will be the equivalent used by more than 900 homes during the daytime. Completion is expected in May 2005. “Large companies are now making projects like this acceptable”, said Ron Kenedi of Sharp Solar, based in Huntington Beach, California. “This is an excellent example of leadership by top global companies like Sharp and FedEx working together to create models that others can replicate to improve the bottomline, and our planet as well”. “FedEx is proving that solar power works for business,” said Oakland Mayor Jerry Brown. “Thanks to the vision shown by FedEx, we’re adding nearly one megawatt of zero-pollution electric generating capacity to Oakland. With this project, we’re well on our way to my administration’s goal of adding five megawatts of solar power in Oakland by the end of 2005.” FedEx’s solar generation system will cover 81,000 square feet on the roofs of two buildings. It will consist of 5,769 PV modules from Sharp, made up of more than 300,000 solar cells from Sharp facilities in Japan. The company will even use its capabilities to help keep the project on schedule by flying the solar cells from Japan to Sharp’s assembly facility in Memphis, Tennessee, where the cells will be assembled into modules. FedEx Freight will then truck the assembled modules to the Bay Area in Oakland. This is the second environmental innovation by FedEx in California this year. In March, FedEx Express in Sacramento became the first company to make a long-term market commitment to develop and use hybrid electric delivery trucks, developed in partnership with Environmental Defense and Eaton Corporation. The FedEx OptiFleet E700 diesel-electric hybrid trucks will be rolled out in additional U.S. cities later this year. “This milestone solar array at Oakland Airport illustrates FedEx’s sustainability ethic and corporate commitment to environmental stewardship,” said PowerLight President Dan Shugar. “By outfitting this airport facility with solar power and incorporating energy efficiency measures, FedEx will be generating clean power and helping offset peak power costs statewide — which benefits all California utility customers.”