Solar power co-operatives are fast emerging has an innovative way for local communities to gain access to renewable energy generation. Over the last few years, several such initiatives have been successfully launched in the UK — with new schemes opening in a number of cities including London and Bristol. So, how do such schemes work? And what benefits can they provide to local people? 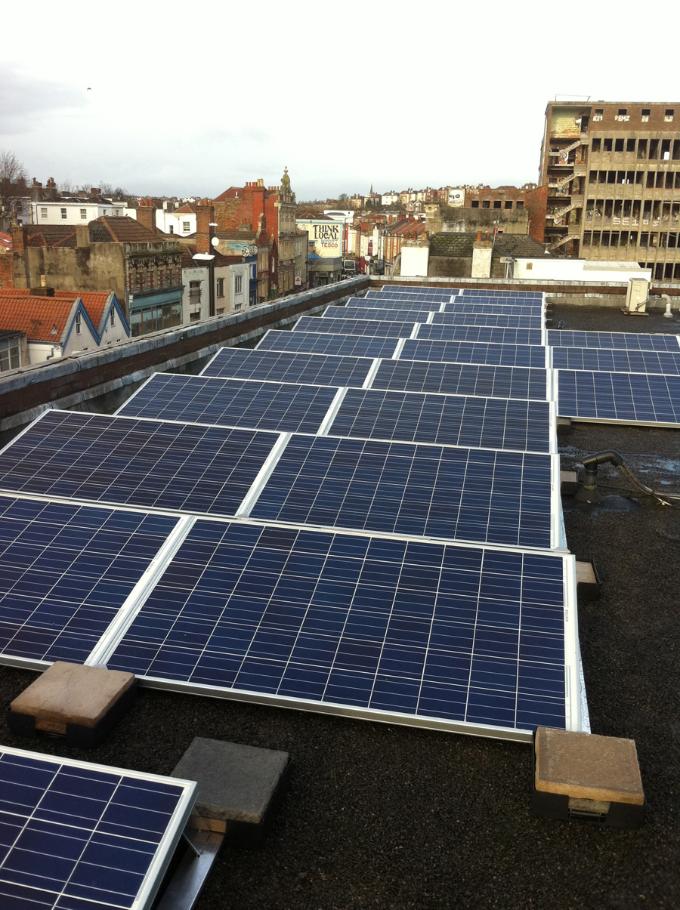 The Bristol Energy Cooperative (BEC), a member of the Bristol Energy Network, was established following a meeting by several Bristol-based environmental activists.  As Peter Thompson, Chair of the BEC explains, one of the key motivations was frustration at the limited options available to unincorporated informal community groups — coupled with the “desire to engage in action at a city-wide scale, beyond the remit of any of the community groups established up to that point.”

In total, the BEC has completed three installations, one at Hamilton House, a community centre in the Stoke’s Croft area of the city, with two others at the Knowle West Media Centre, and at Easton Community Centre.

The Hamilton House project runs to some 20 kW, providing an estimated annual energy output of 14,145 kWh.  It was financed and installed by Ethical Solar, which gave BEC the option of buying the panels, and the resultant generation feed-in tariff income, at an early stage.  The system consists of 85 x 230-Watt Innotech panels and two 3-phase SMA inverters.

At almost 25 kW, the second project at Knowle West Media Centre (KWMC) is a little larger — and boasts an estimated annual energy output of 20,570 kWh.  KWMC is based in South Bristol and supports individuals and communities in getting the most out of digital technologies, music, media and the arts. The solar PV array was installed in July 2012 and the site is also participating in a battery storage and DC system trial with Western Power Distribution.  The system itself was installed by Ecocetera, and consists of 104 x 240-Watt Innotech panels and one Fronius inverter.

According to Thompson, the BEC offers co-op shares — with minimum and maximum levels of investment — and each investor becomes a member, with one vote “regardless of the size of their investment.”

“Based on our income we pay a dividend, which we forecast to be 4 percent.  We’re on track to deliver this,” he said. “Local communities have been very supportive, which has been important in making the projects a success.  In practice, the most important support is from the members of the committees who run the various community buildings.”

Over the last few years, UK community group Repowering South London has successfully implemented two projects as part of the capital‘s first cooperatively owned solar power projects at social housing sites.  For the first part of the scheme, known as Brixton Energy Solar 1, the group installed several hundred square metres of solar panels on the roof of Elmore House in the inner-city Loughborough Estate in Brixton.  The 37.24-kW system, installed by Southern Solar, is made up of a total of 152 x 245-W ET P660 solar panels, fitted alongside two Wagner & Co inverters and a TRIC racking system.

The project was motivated by local concerns about peak oil, peak gas, climate change and social injustice, according to Agamemnon Otero, co-founder, sirector and project manager of Brixton Energy and Repowering South London. “Concerned residents came together around a common goal of decentralised co-operatively owned renewable energy for the welfare of our neighbourhood,” he explained.

At this stage, communal spaces such as lifts are powered by the array, which will offset a total of 13 tonnes of carbon annually.  However, although a reduced energy rate has been negotiated with the housing association, the nature of the existing house billing and metering system means that there will not yet be a direct reduction in the price paid by residents.

Following a model used successfully elsewhere in the UK, the Solar1 project has been established as a co-operative society — a not-for-profit organisation jointly owned and operated by a group of people for their mutual benefit.

“They are democratic enterprises, operating with a one member, one vote policy.  This means that the members of the Co-operative decide collectively who will serve on the Board of Directors and how to divide and distribute the income generated from the project,” explains Otero.

Funding for the initiative was raised by a community share offer, which promises to provide a return to investors of up to 3 percent annually.  A total of 81 people, mostly from the local area, invested sums ranging from £250 to £20,000, helping to raise an impressive £58,000 in less than a month.

A key innovation is the incorporation of a Community Energy Efficiency Fund, which takes a percentage of the profit that would typically flow into an annual share payment to investors, and diverts it into a separate fund devoted to investing in energy-saving improvements in the local area

“The use of the Fund will be overseen by the directors of the Co-operative.  However, initiatives will always be developed through consultation with the local community and by voting from the full co-operative members,” said Otero.

These initiatives range from the promotion and installation of low-cost energy efficiency measures to local awareness raising workshops and work-experience on installations — one Loughborough Estate resident even had the opportunity to work on the installation with Southern Solar.

So far, Otero says that the reaction amongst the local community has been very positive.  Although the project team, which consists entirely of locals, have unrelated jobs and, as Otero put it, “struggle with daily trials and tribulations,” they continue to offer their “unflinching support” — support that ran to 2,200 hours of time over the last year at meetings in local Brixton pubs and at the Loughborough Community Centre.

“Repowerings’ third project, Brixton Energy Solar 3 is almost complete and delivering on all its social aims to boot.  And the share offer is 73 percent full,” he added. 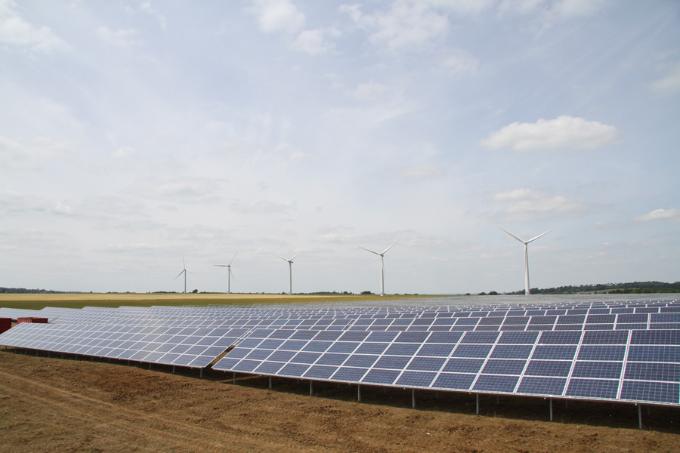 In 2010, Adam Twine, who farms Westmill farm in Oxfordshire, created the Westmill Solar Co-operative with the intention that the wider community would be given the opportunity to own a share of a 5-MW solar plant — one of the few to benefit from the original higher level of UK government feed-in tariffs (FiT), which has since been reduced.  However, the unexpected FiT fast-track review in spring 2011 meant that there was insufficient time for the co-operative to run a share offer, design and install the plant before 31st July 2011.  As a result, the plant was installed by a commercial developer, which granted an option for the co-operative to buy it back.

The plant was commissioned and connected in July 2011, just before the feed-in tariff cuts on 1st August.  German specialists Abakus took charge of all engineering, procurement and construction (EPC) work at the site, which consists of 20,260 polycrystalline solar PV panels from AUO, mounted on structures from Zimmermann PV-Stahlbau GmbH and connected to SMA Solar Technology inverters.

The plant is “just under” the 5-MW FiT threshold, explained Philip Wolfe, chairman of Westmill Solar Co-operative, and is designed to produce about 4.5 million kWh per annum.

Looking ahead, Wolfe is confident that there should be very little additional work required, apart from keeping it at peak performance. “Our illustrative figures show that if we do this every investor will receive their money back plus 3.30 in income for every pound they invest.  This represents an internal rate of return of about 11 percent,” he said.

In another project in Brighton, the Brighton Energy Coop raised more than £200,000 from community investors in the local area and beyond to install three solar energy systems at sites across the seaside city.  As part of the project, completed during June and July, 2012, each member receives a set return on their initial investment.

The largest installation, at Hove Enterprise Centre in Shoreham Port, boasts more than 350 solar panels across seven roofs.  Meanwhile, a second 35-kW array, located on the roof of City Coast Church in Portslade is made up of around than 140 panels — whilst a third 10-kW array provides energy at St. George’s Church Community Centre in Kemptown.

Schemes of this type have also proved popular in the U.S.  In its Guide to Community Shared Solar, published in May 2012, the National Renewable Energy Laboratory (NREL) profiled several examples, and categorised them into a number of models, ranging from so-called Utility-Sponsored Models — “where a utility owns or operates a project that is open to voluntary ratepayer participation,” to Special Purpose Entities (SPE) — where individuals join in a business enterprise to develop a community shared solar project and Nonprofit Models, where a charitable nonprofit corporation administers a community shared solar project on behalf of donors or members.