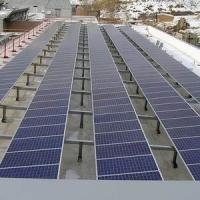 The report showed that in 2008, the top ten utility solar MWs totaled 169, whereas in 2009 the number was 279 MW, a growth of 66%. These ten utilities represented 80 percent of the survey total and represent the utilities that are showing leadership in solar activity across the country.  The results of SEPA’s research suggest that this growth was sparked in part by a drop in price for photovoltaic modules and systems worldwide.

“One thing is clear from these results,” said SEPA Executive Director Julia Hamm. “Now is a great time to take another look at solar electric power. If a utility’s pricing perceptions are even 12 months old, they are out of date.”

All in, however, utilities across the country are strengthening their solar portfolios, according to SEPA’s survey results. The Top Ten utilities’ share of overall solar generation in the survey actually dropped from 88 percent in 2008 to 80 percent in 2009, indicating increasing solar activity by utilities outside of the top ten.

SEPA said that one of the report’s key conclusions is that utilities’ solar portfolios are on the cusp of significant changes. Traditionally, solar electric markets have been distributed, consumer-focused, and solar industry driven but 2009 marked the beginning of change in market dynamics. The 2009 rankings were impacted in part by several centralized or aggregated distributed solar projects that were built or began construction, and several utilities that were directly involved in owning new solar projects. Installations on the utility side of the meter increased 267 percent from around 18 MW in 2008 to 65 MW in 2009 and made up 19 percent of the survey’s total, up from 9 percent the previous year.