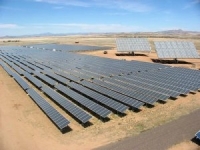 In 2008, more than 5,000 megawatts (MW) of new solar photovoltaic (PV) and concentrating solar power projects were announced, and with the 8-year extension of the federal investment tax credit (ITC), the market is expected to grow significantly, SEPA said.

Along with the tax credit extension, the revised ITC also allows electric utilities to utilize the credit for the first time, by both owning and/or investing in solar projects, potentially creating a critical source of new projects and capital financing during the current economic downturn.

“The past year was marked by an unprecedented number of announcements for new large-scale solar power projects,” said Julia Hamm, SEPA’s executive director. “A significant investment of time and resources by both utilities and solar companies goes into a solar project’s initial development. Current practices and procedures such as requests for proposals, negotiations and contracting occur behind the scenes, but are critical to the overall success of new solar generation.”

The new research report is based on the results of two studies; one conducted to explore traditional methods for the procurement of large-scale solar electricity by the utility market, and a parallel study to explore innovative methods of solar acquisition. The first part of the report dissects the traditional procurement process, which involves the release of a standard request for proposals (RFP) by utilities, to which solar project developers respond. Responses are then internally scored and selected by utility staff and, after negotiations are completed, a contract with a specific company emerges.

The second part of the report looks at innovative procurement ideas, ranging from aggregation of purchasing power by utilities to interactive auctions where pricing response could be more dynamic than a single bid process.