Baila, Senegal [Renewable Energy World Magazine] Many African nations can still be considered as developing countries, a fact that is reflected in their economic, social and political status, as well as in the significant lack of full-coverage energy supplies, particularly in the more rural areas. 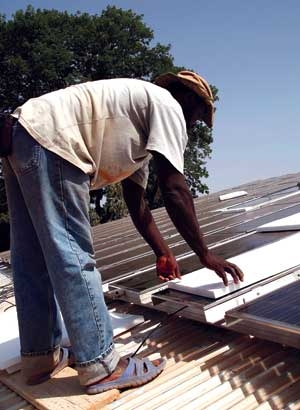 According to information provided by the Organization for One World of Solidarity (OEW), only 26% of the population located south of the Sahara Desert has direct access to electricity – making the region one of the least electrified in the world. And furthermore, the number of Africans who still have to live without access to electrical energy is on the rise.

This situation will not change without outside help. The reason is obvious: expanding the overland network is not a lucrative endeavour for energy providers. There are long distances to cover before all the villages ‘in the bush’ can be reached and, as far as the distribution companies are concerned, the installation costs for electricity networks would be far greater than whatever the rural households would be able to pay.

A large number of relief projects, which are supported by the World Bank among other organizations, are already devoting their efforts towards solving this problem, but Africa is still dependent on the funding provided by private investors.

However, the virtually inexhaustible potential of the sun makes it Africa’s most important raw material and, in the near future, solar energy may well be able to provide the general population with electricity, effectively stimulating the continental economy. This vast resource only needs to be harnessed properly.

The Prerequisite for Local Added Value

Senegal’s economy is currently growing more rapidly than many of its neighbouring countries in West Africa, a fact that is also reflected in its energy consumption. Only one in every three of the approximately 12 million inhabitants in Senegal is supplied with electricity via the public power network today. In rural areas, less than 20% of the population has access to electrical energy.

Without electricity, it is not possible to create added value in the local environment, which is in turn the basic prerequisite for any type of sustainable development. After all, energy supply plays a key role, not only in the economy, but also in virtually every area of day-to-day life – regardless of whether in private households, schools, the skilled trades or hospitals.

In Senegal, the high levels of insolation afford the ideal prerequisite for the installation of photovoltaic systems to provide direct access to electricity or maintain a reliable energy supply as decentralized stand-alone solutions.

In May 2007, under the title of ‘Project Development in Senegal – Renewable Energies and Rural Electrification’, the German Ministry of Economics and Technology (BMWi) offered German companies an opportunity to exchange thoughts and ideas with Senegalese partners and institutions. In addition to establishing contacts there, they were also encouraged to present initial business ideas and to develop them further with their partners.

Just 17 months later, in October 2008, Schott Solar in co-operation with its partners officially began the operation of a solar emergency power system installed with the village inhabitants for a hospital clinic in Baïla, located in the Province of Casamance in southern Senegal.

In this first project, Schott Solar and SMA joined forces with Kaito Energie AG, which had been developing and investing in business-oriented projects in the Senegalese province of Casamance for several years. Together, the companies selected a project in the province.

The local electricity network is often overloaded and can sometimes cut off its service several times a day. A 5 kW solar power system was installed to supply the clinic with power when the regular network is down. The power from the solar modules is initially stored in batteries. If there is a power outage, the system switches over to a so-called mini-grid with virtually no interruption to keep the clinic up and running at all times.

Professor Dr.-Ing. Udo Ungeheuer, CEO at Schott AG, explains: ‘As an important provider of local medical care, it is essential for the clinic in Baïla to have a stable power supply. After all, the staff as well as the patients there must be able to rely on having light and the use of technical equipment.’ 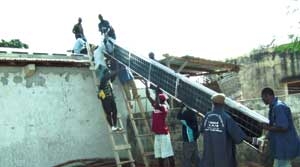 To guarantee the energy supply, Schott Solar donated photovoltaic modules and inverter company SMA donated a ‘Sunny’ back-up system to the clinic in Baïla. ‘Our Sunny back-up system is a valuable addition to the photovoltaic power system because, in the event of a power failure, it switches the system to the stand-alone power supply, making the hospital able to operate independently of the existing, but very unreliable power grid’, commented Michael Wollny, Island Systems project manager at SMA Solar Technology AG.

Four parties worked together to complete the installation of the new system. In addition to the solar modules, Schott Solar also provided the system technology and supported the assembly. The installation was completed by the company and its employees as a project within the scope of their Corporate Social Responsibility (CSR). Meanwhile, Kaito Energie AG took responsibility for project management on location and dealt with the local authorities. The village community built the building extension on which the system was installed.

With an emergency room, a delivery room, 10 beds, a pharmacy and accommodation for family members, the clinic in Baïla provides reliable medical care for the people living within a radius of many kilometres. Up till now, the staff had to make do with the simplest of means in the event of a power outage: petroleum lamps and candles provided light and, if there was any extra diesel available, the clinic was sometimes able to run a power generator until they were back on the grid. These days are now over: the solar power system guarantees an uninterrupted power supply for the clinic around the clock.

On the roof of the clinic, 102 Schott Solar modules produce approximately 8 MWh of electrical energy a year, and any surplus energy is stored in batteries.

The modules were transported by ship via Dakar to the regional harbour in Ziguinchor in Casamance, and then taken overland to Baïla. In Casamance, located on the edge of the topical rainforest, climatic conditions are extreme with a great deal of rain. Following the dry season from November to June, hot monsoon winds herald the rainy season and humid weather from the south. In order to maintain performance, special double-glazed modules were used for the system installed in Ba√Øla, based on the PQ 40/50 module with stainless steel frames, which have stood the test of time in installations in Indonesia and Thailand, for example, since the late 1980s.

Schott Solar regularly tests its modules under extreme temperature fluctuations, permanent humidity and high pressure and suction and, as far as the company is aware, they are the only manufacturer which uses criteria that are twice as strict as those stipulated by the IEC 61215 standard: the modules are subjected to temperatures of +85°C and a humidity of 85%. During the so-called temperature change test, they have to hold their own against temperature cycles ranging from -40°C up to +85°C. In addition to the solar modules themselves, the power inverter also plays a major role for the operating efficiency and the performance of a solar energy system.

People living in Baïla were also directly involved in the installation of the system. The village community built the extension on which the employees of the project partners mounted the system in May. Trainees from the neighbouring technical college worked with experts from Germany and helped to install the modules on the roof. In doing so, they were able to put theory work directly into practice and gain experience working with modern technology. Staff from Mainz took over the electrical installation, the technical approval of the back-up system, and trained the electrician on location, who will now independently service the system and receive on-site assistance from Kaito on a regular basis.

Thanks to the extensive participation of the village inhabitants, the people in Ba√Øla do not perceive the solar power station as a gift given to them from an outside source. On the contrary, they consider it a project that they have realized themselves, with support and assistance from the outside. ‘As a result, we hope that, in addition to the technology, this type of implementation will also set a precedent in Africa,’ said Dr Martin Heming, CEO at Schott Solar AG. He added: ‘We intend to remain active in building a solar market in Africa in the future as well.’

Both Senegal and the companies involved benefit from the investment made in solar energy supply in Africa. After all, the more rapidly the African economy can develop, the more demand there will be for renewable energies. ‘We are helping the African market to develop by already supporting its economic structure today,’ said Ungeheuer. The companies involved are also firmly convinced this project will be more than a lighthouse development. That is why there are more such projects already being planned. Among other things, Kaito is planning to build a chain of village energy kiosks, which will be operated by local small businessmen in a franchise system. Each kiosk will be equipped with a central PV recharging station for such battery-operated devices as lamps and cell phones. The operators will provide information on energy efficiency and supplementary solutions, sell PV consumer goods, spare parts and energy-saving appliances and offer simple installation services.

Due to its high incidence of solar radiation, the African continent is an attractive, new market for solar power companies, although it will still require considerable development. According to the German Aerospace Center (DLR), building solar thermal power stations using parabolic trough technology is one of the most promising options. By the year 2050, it will be technically possible at affordable prices to use the electricity produced in Africa not only for local supplies; it will also be possible to feed it into high-tension power lines several hundred kilometres long to supply the European power network – and to thus satisfy a majority of the power needs in Europe with solar power plants. In addition to solar power plants, Africa also needs smaller photovoltaic systems to deliver a reliable supply of power to villages, schools and hospitals. 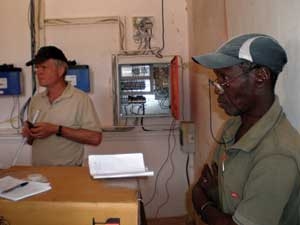 Schott is currently investing in building up a solar market in Africa and is involved in a number of different projects using photovoltaics and solar power stations equipped with parabolic trough technology on the continent. Recently, the company also participated in a further education programme entitled ‘Afrika kommt’ (Africa is up and coming), which was launched on the initiative of German Federal President, Horst Köhler. The aim of this further education programme is to provide young African executives with qualifications, to establish active networks for co-operation at the business level and to intensify economic co-operation between companies from Germany and the 42 nations south of the Sahara.

The project in Baïla is convincing proof that solar energy is the key to electrification in Africa. And a reliable power supply is a major basis for sustainable development. In rural regions in particular, there is often no full-coverage, stable power supply – but what they do have is a lot of sun. ‘The Schott Group sees one of its tasks in the sustainable improvement of people’s living conditions. Electricity is a prerequisite for education and development – and with our activities we are making a contribution towards electrifying Africa’, said Heming.

Lars Waldmann is public relations manager at Schott Solar AG.  You can contact him by emailing lars.waldmann@schottsolar.com.