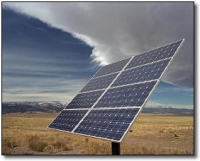 As the House Committee on Energy and Commerce begins two days of hearings on last month’s massive failure of the electric grid, the Solar Energy Industries Association (SEIA) is urging Congress to do more than increase grid capacity as it seeks to prevent future blackouts. SEIA cited several key reforms that should be part of the energy bill’s efforts to address the blackout, and which could be done for one-tenth of the estimated US$100 billion grid fix price tag. Chief among the recommendations is to direct investments to technologies that allow businesses, homeowners and farmers to generate their own electricity, known as ‘self-generation’ or ‘distributed generation.’

Washington, D.C. – September 4, 2003 [SolarAccess.com] “Blackouts don’t start in the middle of the night, they start in the afternoon, when everyone is using electricity at once,” said Glenn Hamer, SEIA’s Executive Director. “That is when solar power works best. Solar and other self-generated energy sources help on both the supply side and the transmission side. We reduce peak demand, and we also reduce grid stress, because solar bypasses the transmission system entirely, producing electricity right where it is consumed.” SEIA, the national trade organization representing solar electric and solar thermal manufacturers, component suppliers, and distributors, recommends a move towards a “smart grid” that includes time-of-day pricing. “3 a.m. power should cost less than 3 p.m. power,” Hamer said. SEIA wants to see financial incentives for homeowners, businesses and farms to deploy solar and other energy sources that provide reliable back-up and emergency power, and which provide power when energy demand peaks: a $3 per watt consumer rebate that phases out over time; or a 15 percent residential solar tax credit capped at $4,000 and a 20 percent solar investment tax credit. SEIA also recommends the inclusion of the amendments of Representative James L. Oberstar (D-Minnesota) and Representative Lynn Woolsey (D-California), as the amendments could help government agencies keep running in the event of grid failure by allowing them to purchase solar systems. In addition, SEIA recommends national net metering legislation so solar users can supply their excess energy to the grid. “By all means, let’s strengthen the grid,” Hamer said. “But let’s do it in a lasting, forward-looking way that includes a significant role for clean, self-generated power. By ensuring that just 10 percent of the funds required for grid upgrades be directed to advancing technologies that promote self-generation, like solar and fuel cells, Congress can address the blackout with a 21st century solution.”