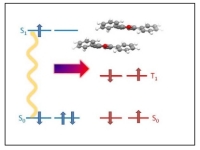 Golden, Colorado, USA — Researchers from the U.S. Department of Energy’s National Renewable Energy Laboratory (NREL) and the University of Colorado, Boulder (UCB), have reported the first designed molecular system that produces two triplet states from an excited singlet state of a molecule, with essentially perfect efficiency.

The breakthrough could lead to a 35 percent increase in light-harvesting yield in cells for photovoltaics and solar fuels.

The experiments, using a process called singlet fission, demonstrated a 200 percent quantum yield for the creation of two triplets of the molecule 1,3-diphenylisobenzofuran (DPIBF) at low temperatures.

In singlet fission, a light-absorbing molecular chromophore shares its energy with a nearby non-excited neighboring molecule to yield a triplet excited state of each. If the two triplets behave independently, two electron-hole pairs can be generated for each photon absorbed in a solar cell. This process could subsequently increase by one third.the conversion efficiency of solar photons into electricity or solar fuels.

The researchers identified DPIBF as a promising candidate while searching for molecular chromophores that have the required ratio of singlet and triplet energy states.

Until this most recent advance, singlet fission had been known as a somewhat obscure phenomenon occurring at low efficiency in a small number of molecular systems. In 2004, NREL and UCB revisited singlet fission as a potential way to maximize solar photon conversion efficiency. In 2006, NREL’s Arthur J. Nozik and Mark C. Hanna calculated the gains in thermodynamic efficiencies that were possible with solar cells based on singlet fission. These activities led to a much more extensive search for the best candidate molecules in a collaboration between NREL and the research group at the UCB led by Josef Michl.

The research has been published in the Journal of the American Chemical Society.  Authors are NREL’s Justin C. Johnson and Arthur J. Nozik, and UCB’s Josef Michl.  For a technical summary of this article, please visit  http://www.nrel.gov/news/pdfs/technical_summary_20101202_press_release.pdf

Depiction of the singlet fission process by which a single absorbed photon creates an excited singlet state that evolves into two triplet states. Electron transfer can then occur from the two triplet states to produce two electrons per absorbed photon in a solar cell device. The molecules shown are DPIBF in a staggered stacking orientation known from its crystal structure.