WASHINGTON, D.C. — Saudi Arabia is jumping headlong into renewable energy, with plans to install more solar and wind power in the next 20 years than the rest of the world has installed to date. 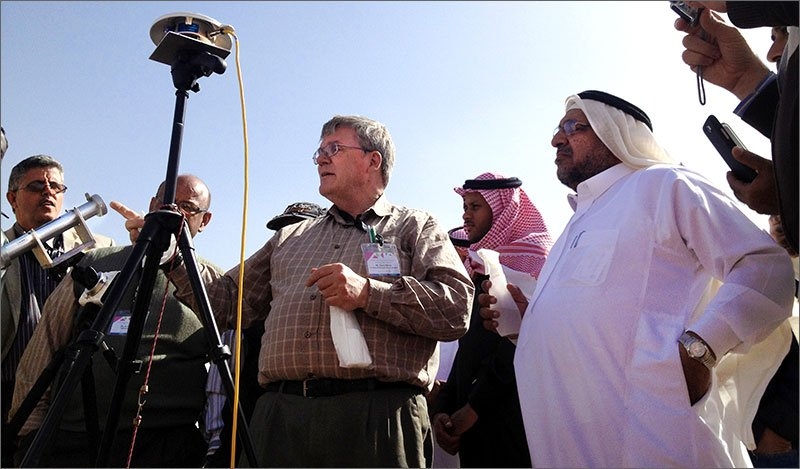 The oil-rich Kingdom of Saudi Arabia is working with the US Department of Energy’s National Renewable Energy Laboratory (NREL) for training and expertise in measuring its solar resource.

The importance of setting up networks to gauge and predict the strength of solar radiation in varying meteorological conditions convinced the Saudis to choose NREL as a partner.

Nine Saudi engineers spent nine days at NREL last month, studying and discussing topics as theoretical as Ångström’s law and the scatter-absorption ratio for the atmospheric effects on solar radiation, and as practical as the effect of sandstorms on solar panels. NREL experts also engaged the Saudi staff with topics including waste-to-energy, geothermal technologies, calibrations, and solar resource forecasting.

NREL and its partner Battelle will install more than 50 monitoring stations in the Middle East kingdom this year to measure the solar resource and gauge the best spots for solar power plants and will also train local Saudis to operate and maintain the instruments and stations.

It’s a crucial part of Saudi Arabia’s plan to spend $109 billion over the next two decades to install more than 50 gigawatts of renewable power in the country and meet at least 30% of its electricity needs with solar energy by 2032. That’s more gigawatts of renewable energy than were installed in the entire world as of 2012.

The overarching goal is to double electricity capacity by 2030 and have half of that energy originate from renewable sources such as wind, solar, and geothermal. The kingdom is expected to write contracts worth $7 billion in 2013 alone. 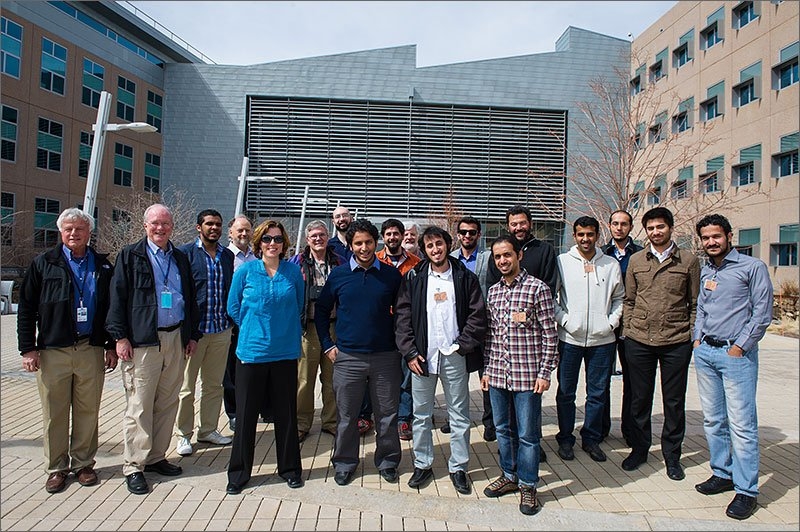 Saudi engineers join their NREL hosts for a group photo in front of NREL’s Research Support Facility. The group was on a U.S. study tour to learn about deliverable renewable resource monitoring and mapping programs. Image Credit: Dennis Schroeder

Why Saudi Arabia? Why does a nation that has huge oil reserves want to become a leader in renewable energy?

“Saudi Arabia is determined to diversify our energy sources and reduce our dependence on hydrocarbons,” said Wail Bamhair, the project manager for the Saudi team that visited NREL. “Renewable energy isn’t just an option, but absolutely necessary. We have the means to build renewable energy, and we need to do it.”

Because Saudi Arabia is lacking in coal and natural gas, it uses a tremendous number of barrels of oil to desalinate water and heat turbines to bring electricity to homes and businesses. Electricity is particularly in high demand during the Saudi summer when temperatures routinely top 110 degrees Fahrenheit and air conditioners are rumbling. Economists have suggested that a big move into renewable energy can strengthen Saudi Arabia’s economy and free up millions of extra barrels of oil for export. Bamhair said that while Saudi Arabia has a lot of sun, it also has challenges such as a variable climate, sandstorms, and even the occasional snowstorm in the northern regions. He shared photos he took of a sandstorm that in a few short minutes plunged an afternoon into darkness along a busy thoroughfare near the capital, Riyadh.

“We are working hand-in-hand with experts from NREL and Battelle who have these amazing minds,” Bamhair said. “We are looking for them to build our human capacity. We are here to see, to learn, and to transfer the knowledge.”

Forty years ago, Saudi Arabia had a population of about 5 million mostly nomadic people. Now, it’s home to 27.5 million people, and most live in cities, including Riyadh, Jeddah, and Medina. 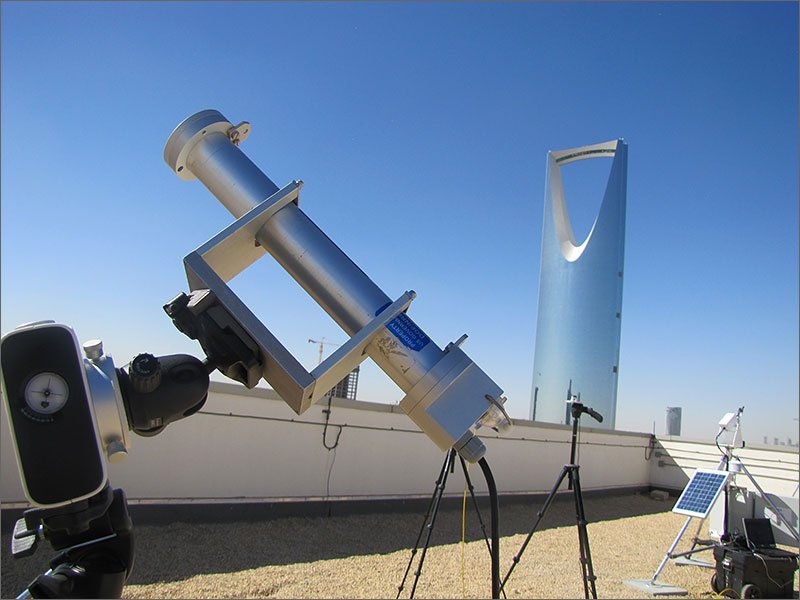 Saudi Arabia has envisioned a new city to bring together researchers and manufacturing facilities for the renewable energy push. It is called the King Abdullah City for Atomic and Renewable Energy, or K.A.CARE, and is expected to have a population between 30,000 and 70,000. Nancy Carlisle, director of NREL’s Integrated Applications Center, and her team also are assisting the Saudis by providing expert insight into lab design and how it can integrate with the city.

“The king and the kingdom recognize that it’s important to look at non-fossil energy sources,” said Tom Stoffel, NREL’s group leader for Solar Resources and Forecasting.

The Saudi government is paying for the projects. In NREL’s case, the parties will sign “Work for Others” agreements in which the American taxpayer pays nothing, but the general knowledge learned can later be used again to help improve renewable energy technologies  in the United States.

Saudi Arabia and NREL have worked together before. In the 1990s, NREL helped launch research centers for the King Abdulaziz City for Science and Technology that was established in 1977.

The new partnership grew out of a visit by Saudi officials in 2010, which included a typical guest tour of the Solar Radiation Research Laboratory at NREL’s Mesa Top facilities. Stoffel noticed his visitors were paying very close attention. “At the end of the tour, one of them asked us if we could help put 100 to 200 monitoring stations in the kingdom,” Stoffel said. “After I picked up my jaw, I said, ‘Yes, that’s what we do.’” NREL is the site of an annual internal gathering to recalibrate solar radiometers and maintains the calibration standard for the United States. 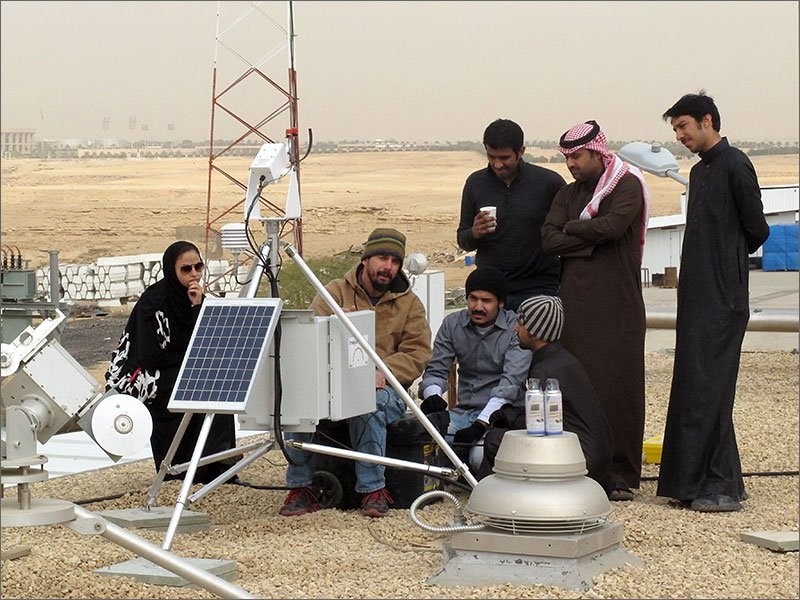 Saudi Arabia eventually decided to put the project out for bid. NREL, partnering with Battelle, won the contract.

“The kingdom is tapping into our expertise on climatology, geography, and population density to make the best decisions on where to put the monitoring stations and the solar power plants,” NREL Senior Engineer Stephen Wilcox said.

“They wanted to do this quickly because they need to demonstrate to stakeholders and potential investors a kingdom-size capacity for renewable energy,” Stoffel said. NREL’s measurements “will help decide where to put a central photovoltaic power plant, or a concentrating solar power plant of a particular size,” he added.

Wilcox and NREL colleague Michael Dooraghi have already set up three solar measurement stations in Saudi Arabia as part of an initial training and outreaching event, including one in Riyadh, one just outside Riyadh, and one near where the new city will be built, about a 45-minute drive from the current K.A.CARE headquarters in Riyadh. Tripods holding several solar monitoring instruments are anchored either in the ground or on heavy concrete ballasts.

“It’s important that they know precisely what the solar resource is so the financial stakeholders can know exactly what kind of return to expect,” Wilcox said. “The more uncertainty in the measurements, the more uncertainty there is in the analysis. They could either make $100 million or lose $100 million based on how well the measurements are taken.”

Some of the stations will be research quality, using instruments similar to the best ones at NREL.

Others will be self-contained stations that are powered by photovoltaics (PV) and placed farther into the deserts or even some of the lesser-known areas of the kingdom. Crews will stop by every week or two to do maintenance on those stations.

A third type of station will be simpler yet, measuring just a subset of the factors that the larger stations measure. Those stations, though, play a crucial role in getting the whole climactic picture, including determining the role of microclimates and the impacts of large clouds passing by central solar power stations.

“We’re trying to put together the best measurement network in the world,” Wilcox said.

Mapping and Monitoring All Over the Globe

NREL’s solar and wind resource assessment teams have mapped these renewable energy resources in several countries around the world.

For Saudi Arabia, the resource mapping will help officials decide where to put the large stations and where to distribute the smaller ones.

The data the stations collect can also be compared to other data NREL has collected around the world in its solar and wind integration studies. These data will be incorporated into the K.A.CARE Renewable Resource Atlas, currently under development by Battelle as part of the same project, and will be available online for researchers and others to use. Among the information will be data on solar radiation, the solar spectrum, temperature, dust levels, humidity, and wind speeds.

“They need to know about variability to maintain a stable grid — and that means making good predictions about what the next three minutes, the next hour, the next three days are going to look like,” Wilcox said.

The fact that the Saudi king can order a huge nationwide project has its advantages. The United States and other countries can learn rather quickly what a full-scale embrace of renewable energy will look like in terms of planning, cost, and avoiding surges on the electricity grid or other mistakes.

Dr. Maher Alodan, head of the Research, Development, and Innovation Team at K.A.CARE, said last year that the project is a crucial one. Identifying primary sources of energy is a critical first step. “Undertaking such a project will require a comprehensive study that can only be carried out successfully if we know the specific geographic locations, and most importantly, the quality of solar radiation, and the factors that may affect the available resource.”

At NREL last month, Bahmair said: “Our dream is to move Saudi Arabia to the first rank of nations in terms of sustainable energy. We have the smart young people, but we are looking to NREL and Battelle to share their expertise.

“This is the time for it,” Bamhair added. “And NREL is the right facility to help us move forward. They are opening the door — and we have to walk through it.”

The Saudis also plan to make a big leap into concentrating solar power (CSP), the cousin of solar PV technology. In fact, 25 of the 41 gigawatts of planned solar energy will come from CSP.

PV panels convert photons from the sun directly into electrons for electricity, but only work when the sun is shining. CSP technologies use mirrors to reflect and concentrate sunlight onto receivers that collect the sun’s heat. This thermal energy can then be used to drive a steam turbine that produces electricity.

CSP can store that heat in molten salts for up to 15 hours and can thus team with PV to help bring electricity to homes and businesses when it’s most needed — in the evening hours when the sun has set, but the appliances, TVs, and air conditioners are still in demand. NREL’s recent paper on that capacity, Enabling Greater Penetration of Solar Power via Use of CSP with Thermal Energy Storage, has sparked renewed interest in the two solar technologies sharing the load.

“The first project — installing the monitoring stations — is important for the CSP piece, too, because CSP depends on knowing the measure of clean-sky radiation,” NREL’s Scott Huffman said.

Financing is another piece of the puzzle. The plan is to pay for the 41 gigawatts of solar power via third-party purchasing agreements. NREL analysts could help the Saudis understand the intricacies of loans, returns, and paybacks in the world of renewable energy.

Other key aspects of the work include:

Meanwhile, NREL is overseeing the installation of the solar monitoring stations — and not exactly roughing it.

NREL scientists are used to working in stark conditions overseas, so when Wilcox and Dooraghi were planning their trip to install a monitoring station in a stretch of desert, Wilcox told his Saudi hosts that all he needed was some cold water and a toilet.

Instead, “They set up a tent with rugs and cushions, good food, a modern bathroom, cold juice, hot tea, and hot coffee,” Wilcox said. “It was quite comfortable.”