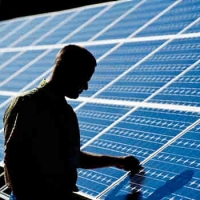 Sandia researchers’ work is currently focused at the 1.2-megawatt La Ola Solar Farm on the Hawaiian island of Lana’i. La Ola is the state’s largest solar power system, and can produce enough power to supply up to 30 percent of the island’s peak electric demand, which is one of the highest rates of solar PV power penetration in the world. Understanding variability of such a large plant is critical to ensuring that power output is reliable and that output ramp rates remain manageable.

“As solar power continues to develop and take up a larger percentage of grids nationwide, being able to forecast power production is going to become more and more critical,” said Chris Lovvorn, director of alternative energy of Castle & Cooke Resorts, LLC, which owns 98 percent of the island. “Sandia’s involvement and insight has been invaluable in our efforts to meet 100 percent of the island’s energy needs with renewable resources.”

The effects of clouds on small PV arrays are well-documented, but there is little research on how large-scale arrays interact and function under cloud cover. A small system can be completely covered by a cloud, which drastically reduces its power output, but what’s less well understood is what happens when only part of a large system is covered by a moving cloud shadow, while the rest stays in sunlight.

“Our goal is to get to the point where we can predict what’s going to happen at larger scale plants as they go toward hundreds of megawatts. To do that, you need the data, and the opportunity was available at La Ola,” said Sandia researcher Scott Kuszmaul.

The high penetration of PV power on Lana’i, combined with the sun and cloud mix at the 10-acre La Ola plant, provides an optimal environment for prediction and modeling research. Research could not interfere with the ongoing operations of the plant, which currently sells power to Maui Electric Company (MECO), so Sandia engineers connected 24 small, nonintrusive sensors to the plant’s PV panels and used a radio frequency network to transmit data. The sensors took readings at one-second intervals to provide researchers with unprecedented detail about cloud direction and coverage activity.

A radio frequency transmission system has the added benefit of being portable. “Currently, a utility company that wants to build a large solar PV power plant might have a lot of questions about the plant’s output and variability at a proposed site. Work being done at the La Ola plant is leading to new methods that eventually can be used to answer these questions,” said Sandia researcher Josh Stein. “These techniques will allow a developer to place a sensor network at a proposed site, make measurements for a period of time and use that to predict plant output variability.”

La Ola was commissioned in December 2008 by Castle & Cooke Resorts, LLC, and SunPower Corp., a manufacturer of high-efficiency solar cells. The project uses SunPower’s Tracker technology. Panels rotate on a single axis to follow the sun, which increases energy capture by up to 25 percent. Since February, Sandia Labs has held a cooperative research and development agreement (CRADA) with SunPower to conduct research on integrating large-scale PV systems into the grid. The CRADA is funded with about $1 million of combined U.S. Department of Energy and SunPower funding and is expected to achieve significant results, which will be disseminated through joint publications over the next two years.

Stephanie Hobby is a science writer with Sandia National Labs in New Mexico.