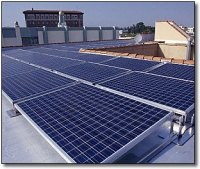 Solar photovoltaic module manufacturer RWE Schott Solar (RSS), announced that its flat-roof solar electric system on the West End Hotel in Culver City, California is up and producing power for this historical building. Although not an overly large system by industry standards at 20 kW (AC), the installation bears interest in the challenges overcome, including meeting city regulations for buildings with an historical designation, while also meeting the fire department’s strict safety code for buildings of this type.

Rocklin, California – May 6, 2004 [SolarAccess.com] Built in 1923, this “E” shaped hotel was designated an historical building in the early 1980s. While the designation gives the building some marketing cachet, it also carries with it several restrictions as to what can or cannot be done to the building’s exterior, particularly what can be visible on the roof. In addition, because of the building’s age, the fire department has special safety regulations for this type of structure, specifically that there can be no devices blocking roof access or blocking penetration points should a fire fighter need to break through the roof. “We became interested in installing a PV system on the hotel to help lower our electricity bill after seeing a demonstration at a local home improvement store. We did some research and were impressed with A&M Home Improvement and the quality work they do. We hired them to do our installation and we were ready to go. At the time, we had no idea of the hoops we were going to make A&M jump through,” said Marshall Fried, managing partner, West End Hotel LLC. Instead of the typical permit process, because of the building’s historical designation, West End Hotel had to submit a full plan review to the city. This meant several meetings and detailed descriptions of the project with multiple city workers over the course of a year. This also meant the fire department had to review and approve everything on the plan, resulting in multiple trips up to the roof for hands-on reviews. “Addressing the city’s historical building regulations wasn’t too difficult,” said Raffi Agopian, vice president of sales and marketing for A&M Energy Solutions, a division of A&M Home Improvement. “We just had to make sure we addressed the city’s concerns and that nothing was visible on the roof. However, in order to meet the fire department’s safety codes, we had to be sure no module would block access to the roof and that no module was installed directly above a hallway.” This installation worked out to the fire department’s benefit, as it actually lays out a visual runway across every roof section, showing exactly where the hallways run underneath. Plus, if they should have to, they can just move any module out of the way. The SunRoof FS system installed sits on the roof with no ballasting or roof penetrations. The 20 kW system consists of 80 RSS ASE-300/DGF-50 modules and produces enough electricity to power 4-6 average homes a year. The system, which cost $164,324, received a rebate of $80,944 from the California Energy Commission’s Emerging Renewables Program. The installation is expected to pay for itself in about five years.