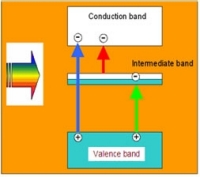 The company said that this technology illustrates great promise for high efficiency thin film solar efficiencies above 35% by potentially capturing the full spectrum of the sun’s spectrum. The intermediate band solar cell developed by RSLE, is a thin film technology based on the discovery of highly mismatched alloys.

“Although we are three to four years away from high volume production with the IBand product, this development opens up a new class of semiconductor devices for photovoltaic conversion and other advanced semiconductor applications.  It fits seamlessly with our Hybrid PV commercialization,” said Bob Forcier, CEO of RSLE