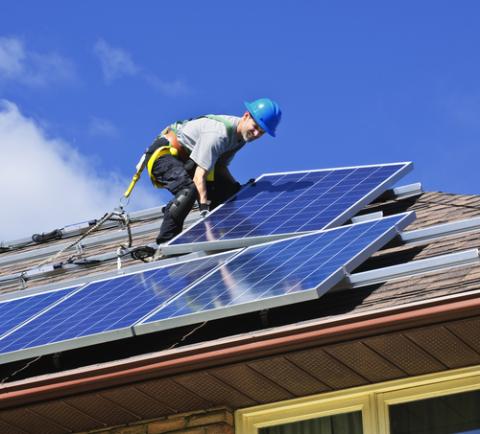 NEW YORK — Dorian Bishopp blames the solar panels on his roof for costing him almost 10 percent off the value of the home he sold in March.

That’s because instead of owning them he leased the panels from SunPower Corp., requiring the new owner of the house to assume a contract with almost 19 years remaining. He had to shave the asking price for the house in Maricopa, Arizona, to draw in buyers unfamiliar with the financing arrangement.

Leasing is driving a boom in solar sales because most require no money upfront for systems that cost thousands of dollars. That’s made solar affordable for more people, helping spur a 38 percent jump in U.S. residential installations in the past year. Since the business model only gained currency in the past two years, the details embedded in the fine print of the deals are only starting to emerge.

“Homeowners don’t understand what they’re signing when they get into this,” said Sandy Adomatis, a home appraiser in Punta Gorda, Florida, who created the industry’s standard tool for valuing the systems. “You’ve got another layer to add on top of finding a buyer for the house. It’s not a plus.”

For people who own rooftop power systems, solar adds value to the home — about $25,000 for the average installation in California, according to a study in December by the Lawrence Berkeley National Laboratory, funded by the U.S. Energy Department’s SunShot Initiative.

Leased systems are another story because they’re considered personal property rather than part of a house. For many potential buyers, a solar lease is a liability rather than an asset, and may drive some people away, said Adomatis, who wrote the Residential Green Valuation Tool, a guide offered by the Appraisal Institute trade group.

Solar leases were introduced in 2008 and started to take off in about 2012. As much as as 70 percent of the residential systems being installed now are financed through leases, according to GTM Research. Most of the systems in place remain in the hands of the original customer, suggesting the difficulties in selling these properties are just beginning.

“Some buyers just won’t be on board” with assuming a solar lease, said Nick Culver, a solar analyst at Bloomberg New Energy Finance in New York. “Even if you save money every month, you limit yourself to a certain subset of buyers.”

SolarCity Corp., the solar installer backed by billionaire Elon Musk with 110,000 lease customers, has transferred ownership of about 1,500 contracts to date and says the new owners typically will continue to enjoy lower power costs. It created an eight-person team that’s handling about 150 transfers a month because of growing demand for the service.

“They’re essentially moving into a home with a lower cost of ownership, a lower cost of energy,” so a solar lease shouldn’t make it harder to sell a house, said Jonathan Bass, a spokesman for SolarCity in San Mateo, California. “It becomes a selling point instead of a point of misunderstanding.”

Scott Vineberg, a SolarCity customer, received multiple offers for the Scottsdale, Arizona, home he sold in January. The lease made the deal more complicated because the buyers were reluctant to take over the contract and asked him to pay off the balance in advance, about 10 years of payments.

Bishopp had a tougher time. “We had one offer in five months, and they pulled back as soon as they found out about the solar lease,” he said. “It’s a deterrent, definitely.”

The solar panels saved him about $50 a month on power costs. Before the panels were installed, he paid the local non- profit utility, Electrical District No. 3, 11.85 cents a kilowatt-hour for the first 500 kilowatt-hours a month, and 14.35 cents after that. His monthly bill was about $242.

With the lease from SunPower, he paid $160 a month for the 30 rooftop panels and owed another $32 to cover the utility’s monthly minimum charge. Under the lease, he paid 11.5 cents a kilowatt-hour for electricity, a rate guaranteed for the length of the contract.

The house sold for $140,000 in March, and the buyer took over the lease with the same rates. Bishopp had initially sought $155,000, and lowered the price three times.

He had to “price the house lower than houses without solar to get people interested,” said Brian Neugebauer, the real estate agent at Re/Max Excalibur who helped sell the property. Potential buyers, he said, were “scared of the solar lease.”

There was one more hurdle: to take over the contract, SunPower had to approve the new leaseholder. The buyer’s credit score was a few points short of the solar company’s minimum, and was initially rejected. Bishopp had to persuade SunPower to reverse its decision.

In the “vast majority of cases,” buyers who qualify for a mortgage will also qualify to take over a solar lease, Martin DeBono, a SunPower vice president, said by e-mail.

The company has 20,000 residential lease customers, and fewer than 1 percent have sold their homes. Most of them transferred the lease to the buyer.