New Hampshire, USA — Countries around the world continue to hungrily develop, pursue, and approve utility-scale solar PV projects, defined as upwards of 10 MWp in size (DC capacity). In its latest rankings released this week, Wiki-Solar says utility-scale installations in 2013 already have exceeded 6 GWp (a record) and are on track to top 8 GWp by year’s end, up from 5.6 GWp in 2012 and 3.6 GWp in 2011. That’s a market value of “well over $10 billion,” says Wiki-Solar founder Philip Wolfe.

As the market for these projects surges, engineering, procurement and construction (EPC) firms are clamoring to help build them out. First Solar is poised to achieve 1 GW worth of solar PV installations this year, heading a pack of integrators who will more than doubled their business in 2013.

One thing worth noting about these latest rankings is how quickly big multinational EPC companies such as Bechtel and Fluor are establishing a foothold. Solar PV “is just reaching the scale where the big boys think it’s worth looking at,” Wolfe said. And since they tend to focus on the mega-sized projects (hundreds of MW) they’re rapidly climbing this list. To be fair, though, some of them aren’t exactly new to the business: Fluor built a multi-MW plant for Arco in 1984, on part of the site to be occupied by First Solar’s 550-MW Topaz solar farm, Wolfe points out.

Also worth paying attention to is the progress of companies such as First Solar and SunPower, which realized they needed to spread into downstream project development and EPC. As the market matures, though, crossing over into project development will become increasingly difficult, especially for bulk producers who don’t have some distinction (First Solar has its thin-film panels, SunPower boasts higher efficiencies), and even those who do might eventually have to choose which part of the market they’ll serve. Wolfe likens the dynamic to the evolution of the automotive industry, where in its early days companies produced everything but eventually learned to specialize on engines, components, etc.

Note a lack of Chinese companies on Wiki-Solar’s newest rankings. That’s mainly because EPC firms usually aren’t announced, or the EPC work is done in-house by the developers, points out Wolfe. In fact “there’s a lot of [EPC] work and experience going on over there,” he said, adding that the market is essentially completely captive and locked out to foreign companies. While some international companies are making slight inroads with component technologies such as inverters and even some solar panels, “for actual project development there’s no real sign that China is looking outside its own borders,” Wolfe said.

Lists like these by their nature are a snapshot of past performance, but Wolfe is optimistic that “2014 should be better than 2013.” He also sees quite a lot already in the pipeline for 2015, but looking that far out gets hazy depending on what happens in some promising markets. Chile and Brazil have huge pipelines, for example, but Wolfe wonders: “are they going to crank the handle fast enough to keep things running, or will they slow down?”

Look for the next update of utility-scale solar PV EPC firms to have some new names on it. Wolfe pointed to several “quite large portfolios of projects under development” for several companies who barely missed the cut this time, notably Schneider Electric, while Gestamp and Martifer should move up the list. He also expects Fluor and SunEdison to move up. 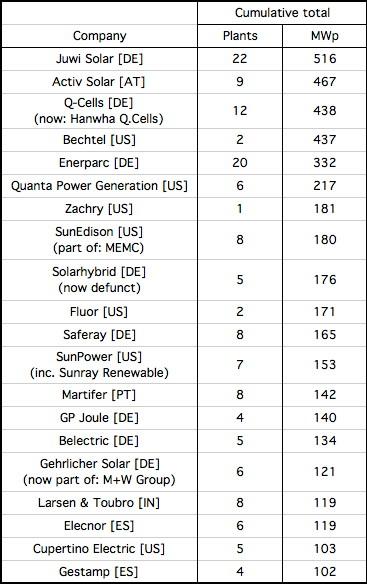 Solar power plant of 10 MWp and over. Credit: Wiki-Solar.org