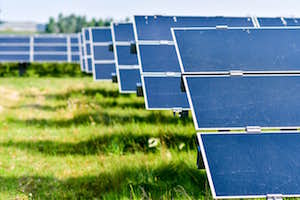 Solar power projects bid at low tariffs may be at risk as the prices of photovoltaic panels have risen amid a push in the U.S. to impose anti-dumping duty on cheaper imports from China.

Tariffs could also rise from record lows as uncertainty over costs may deter renewable energy producers from quoting low rates in future auctions.

Solar power producers that participated in auctions this year quoted lower tariffs assuming that panel prices will remain below 30 cents, Aggarwal said. “Any increase in prices is not covered under the power purchase agreements.”

Growing risks may be a setback, at least in the short term, to Prime Minister Narendra Modi’s target to install 100 GW of solar capacity by 2022 from a little over 13 GW now. That’s because about 84 percent of solar panel requirement in the country is met through imports from China, a report by renewable energy consultancy Bridge To India said. Solar panels account for more than half of a project’s total costs, according to Bloomberg New Energy Finance. Major Chinese solar panel makers include Trina Solar, Jinko Solar, Canadian Solar, JA Solar.

Power tariffs fell over the past few months to hit a record low of Rs 2.44/kWh at the auction for 500 MW of capacity at the Bhadla Solar Park in Rajasthan in May. BloombergQuint’s e-mailed queries to SBG Cleantech Pvt. Ltd. and Acme Solar Holding Ltd., which won the bid, regarding the impact of rising panel prices remained unanswered.

In Tamil Nadu, the tariff fell to Rs 3.47 a unit in reverse-auctions for 1,000 MW solar plants last month. It’s lower than Rs 4.40 a unit, the previous lowest bid in an auction conducted by the state in February.

The tariffs declined largely as power producers bet on falling prices of solar panels. And their confidence stemmed from a 26 percent decline in prices in 2016 alone.

The trend reversed after Suniva, a U.S. based solar manufacturer that has filed for bankruptcy, moved the U.S. International Trade Commission in April to impose anti-dumping duty and a global tariff on Chinese imports. Ironically, Suniva is majority owned by a Chinese company, Shunfeng.

American solar rooftop services providers started stocking up on panels fearing tariffs, pushing up the prices, Aggarwal said. China also extended its feed-in tariff regime instead of moving to an auction-based system, keeping the panel demand high. Feed-in tariffs is a mechanism for payments to anyone generating power from renewable sources and supplying to the grid. That too aided the price rise, Aggarwal said.

Panel rates have gone up by 5-6 cents to 35 cents a watt over the last few months, said Kameswara Rao, partner, PwC, who tracks the renewable energy sector. If China replaces feed-in tariffs with auctions, it will have an impact on the prices of panels as well.

Till then, what action the U.S trade commission takes on Suniva’s petition will decide the course. Indian Solar Manufacturers Association too has demanded an anti-dumping duty on imports from China, Malaysia and Taiwan, and the ministry of corporate affairs has launched an investigation, adding to uncertainty.

“If you compare with three months ago, if it’s a large volume (of imports), price impact may be 2-3 cents a watt. If it’s a smaller volume, the impact is about 5-6 cents,” said Gagan Vermani, managing director and chief executive officer of MYSUN, a solar rooftop solutions provider. Power producers that banked on lower prices to bid for projects will take a hit on profitability, he said.

Some state governments also delayed signing power purchase agreements after an auction due to worries of excess capacity, said PwC’s Rao. This will also affect the viability of projects where bidders have an exposure to panel prices, he said. “In recent times, it had become common for bidders to delay procurement in the hope of buying at lower rates.”

“Any project is required to be built in six to nine months and there is clearly a risk of high panel prices,” said Aggarwal. If the projects go beyond that to suppose 12 months, it will be difficult to predict the international market price, he said.

“I don’t think solar power producers will take additional risk. They will make safe assumptions. You will see solar power tariffs firming up,” he said.

PwC’s Rao feels a lot will depend on the Chinese feed-in tariff program. “With the current information, we expect solar tariffs in imminent bids to go up by 15-20 paise/kWh. The baseline will be higher for state-level solar bids as investors are consciously factoring in payment and curtailment risk,” he said.