The first-in-the-nation Clean Energy Partnership last year reached the end of its first two-year work plan and gathered a lot of baseline data. But is it successful?

As expected, it’s hard to tell. The first work plan wasn’t adopted until well into the first year of the Partnership (2015), and a lot of existing utility and city initiatives around energy complicated evaluation. Furthermore, the work plan items were grouped by target population, rather than the goals and targets of the Partnership.

Despite the challenge, we’ll give an overview of the progress of the Partnership, as well as a peek into the future based on the first 2017-18 work plan discussion held by the community advisory committee in late August.

Reading the annual report, it’s hard to tell. While the Partnership has done well in identifying key metrics to track, from energy efficiency visits through existing audit programs to solar installs within the city, few are measured against the ambitious targets of the Partnership, including:

The following graphic shows the discrepancies. 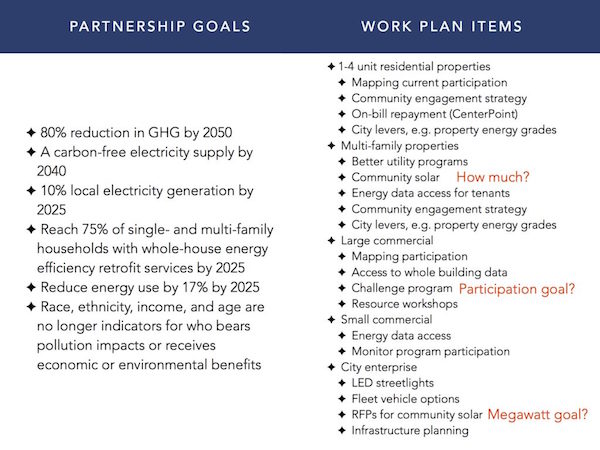 The work plan items certainly promote reducing energy consumption, increasing renewable energy, and reducing emissions. But the key omission seems to be measurable targets and goals. In other words, we can’t really say if we succeeded!

There’s also a problem of gauging whether the reported changes are due to the work of the Partnership or whether they would have happened anyway. Let’s check the key outcome, before we dive into the details.

Although emissions are down 7.5 percent from the baseline 2006 levels, they’ve actually risen 10 percent from a low point in 2012 (an abnormally warm year) because of increased natural gas use. While we may be able to explain this problem, we’re also making minimal progress. In eight years since the baseline, weather-normalized natural gas use has fallen by just 9 percent. 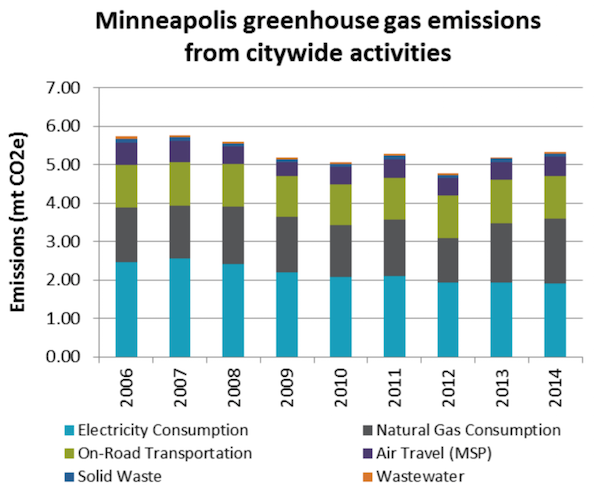 In the big picture the city clearly needs help — help the Partnership is intended to provide. How are the Partnership’s work plan items faring, even if we can’t measure their success quantitatively?

A Review of the First Partnership Work Plan

A lot of time was spent developing the means to measure progress and setting baselines, with most major new efforts launching too late in the two-year work plan to expect any significant returns yet. The following provides some details.

The major work in this area involved mapping existing participation, modest expansion of existing energy efficiency efforts by the utility and city, and the creation of a (yet-to-be-launched) community engagement pilot. Without significant expansion, the city is far behind its target of serving 75 percent of properties by 2025.

The annual report details the number of low-income customers served, money spent, and anticipated savings among these customers participating in utility conservation and federal weatherization programs, as well as a map by census tract. The city of Minneapolis did provide a co-pay and interest rate buy down for low-income participants in Home Energy Squad visits, and participation rose significantly (from about 700 to 1,200 visits), especially among renters. However, the report doesn’t say what proportion of the total low-income customers in Minneapolis these 1,200 participants represents, so it’s hard to say how well the work plan programs are reaching this population.

The utility launched a new joint multi-family energy efficiency program late in 2015, but the report offered no insight into community solar or energy data access as yet.

This area of the work plan probably provided the most information, because the city launched a commercial benchmarking initiative several years ago. In terms of driving participation, however, there’s work to do Only 3 percent of commercial buildings had accepted the city’s energy challenge by date of publication.

The only role of the Partnership was to monitor Xcel Energy’s existing “Partners in Energy” Lake Street program for potential design ideas to include in a 2017-18 work plan proposal. No updates were provided in the annual report.

The city itself was quite active on its promised work plan items, with the city fleet transformation the only item left unaddressed. The city is also considering new ordinances to help push Partnership goals forward.

In late August, the Energy Vision Advisory Committee — made up of 15 city residents — began refining the Partnership Work Plan for 2017-18. After some discussion and brainstorming, each member was given 8 votes to prioritize the proposed items (several members were not present, and others did not use all their votes, so only 79 total votes were cast). While far from final, it provides some context about the likely aims in the next work plan.

Inclusive financing via on-bill repayment received 17 votes, more than 20 percent of the votes cast. There were 13 votes for setting interim, measurable targets for various work plan items, 6 votes for increasing the city franchise fee to support Partnership activities, and 5 votes across several initiatives related to expanding the community engagement pilot. The areas of greatest interest (as measured by total votes) were multi-family housing, primarily for inclusive financing, and the brainstorming “bike rack” for new ideas.

The following list details the votes cast, culled from snapshots of the brainstorm boards. A few were blurry, so apologies for the question marks.

A Slow Start, but Accelerating

The lesson from the first annual report is that the initial work plan merely set the stage for the work to come. The first hints at the second work plan show a much more substantive and ambitious effort to accelerate emissions reductions and energy savings for Minneapolis residents, regardless of socioeconomic status. Two big questions still remain, however:

1.   Will the second work plan have some meaningful targets against which to measure success?

2.   Will the utilities and city devote sufficient resources to reach them?

For background on the formation of the Partnership, listen to this interview with ILSR’s Director of Energy Democracy John Farrell.