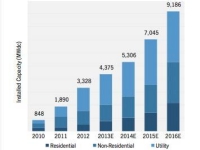 New Hampshire, USA — Big growth in residential solar demand, bucking broader market volatility and seasonal trends, set the pace for yet another record quarterly performance for U.S. solar installations during the first three months of 2013, according to just-released analysis from the Solar Energy Industries Association (SEIA) and GTM Research.

U.S. solar energy installations totaled 723 megawatts (MW) from January through March, a 33 percent increase from a year ago and the solar sector’s best-ever first-quarter performance. That’s a big dropoff from the whopping 1300 MW of installed PV in the fourth quarter of 2012, but it’s typical for this sector to see a late-year boom and subsequent early-year pause. (Similarly, a year ago U.S. solar installations surged in the final quarter of 2011 and then fell back in 1Q12.) The nation now exceeds 8.5 GW of cumulative installed solar electric capacity, of which 7.9 GW is PV. Solar nearly made up half (48 percent) of all new electric capacity installed in the U.S in 1Q13.

Here are some more nuggets from the U.S Solar Market Insights 1Q13 report: 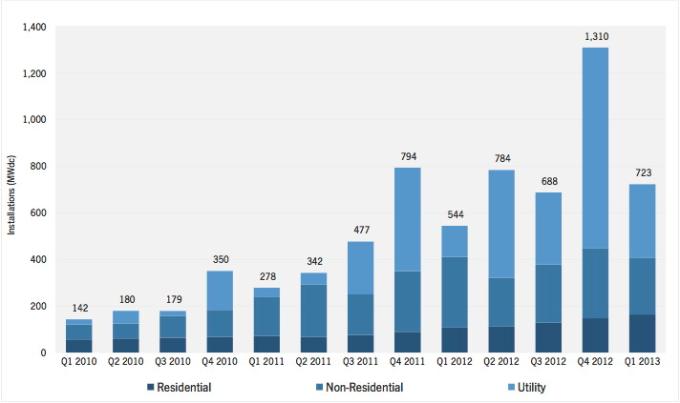 SEIA and GTM predict more than 5.3 GW of installed solar energy will come online in 2013, including the first batch of large concentrated solar power (CSP) projects totaling 938 MW (ac). GTM Research’s Shayle Khan predicted an acceleration in U.S. solar PV installations over the next four years as the economics continue to improve: roughly 4.4 GW in 2013, 5.3 GW in 2014, 7.0 GW in 2015, and 9.2 GW in 2016 (which is when the current federal investment tax credit runs out.)