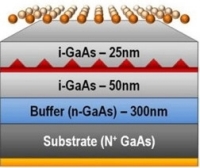 New Hampshire, U.S.A. — The U. of Buffalo (NY) says adding quantum dots into solar cells could increase their efficiency by a whopping 45%.

Their research, published in last May in the journal Nano Letters (here’s a PDF of the paper), says that embedding quantum dots allows the cells to harvest infrared light, and also increase the lifetime of photoelectrons.

Using quantum dots to boost solar cell efficiency isn’t exactly new; it’s been investigated for at least the past decade (here’s one example). For the Buffalo team, the key appears to be that not only can they embed quantum dots, but they can be selectively doped to contain “a significant built-in charge” (dubbed “Q-BICs”), which forces electrons to keep bouncing around and thus minimizes recombination losses. They also claim the technology can be applied to many different solar PV structures — their research relied on a InAs/GaAs test device.

Adding two quantum dots increases conversion efficiency by just 4.5%; adding four or six QDs improves efficiency by 30% and 50% respectively — in the latter, the device went from 9.3% to 14% efficiency.

A spinoff company, OPtoElectronic Nanodevices LLC, has been formed to commercialize the technology, and is currently seeking funding from private investors and federal programs (hence the delayed timing of the PR vs. the published paper). The research was done in conjunction with researchers from both the Air Force Office of Scientific Research and US Army Research Labs. 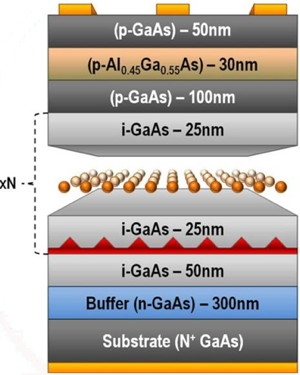