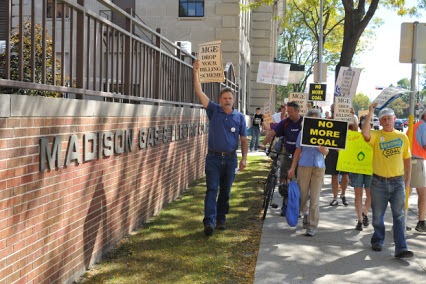 An unconventional approach to grassroots organizing in Wisconsin’s capital city has in recent years tipped incumbent utility Madison Gas & Electric (MGE) toward policies that favor consumers and renewables, a distinct shift in a state held back for years by entrenched monopolies with outdated business plans.

RePower Madison, a local nonprofit whose mission is to give citizens more flex in the energy economy, led the fight. While state-level efforts failed in front of utility-controlled regulators and an unhelpful legislature, RePower quietly emerged as a pioneer in the fight to grow local power and push MGE away from an archaic business model hinged on building new power plants and selling more electricity.

That outdated model doesn’t sync with a marketplace where renewable energy, including wind and solar power, is more abundant and less costly than ever before. RePower Madison and its allies are making progress, thanks in large part to a strategy that brings the clean energy debate straight to the heart of an investor-owned utility: its boardroom.

A RePower Madison report showed that MGE sourced roughly 70 percent of its power from coal, and that its rates were among the highest of any Wisconsin utility. The organization helped to rally shareholders around better policies that support cost savings for customers and greater clean power capacity.

Once a year, the utility’s investors can propose changes to how the company does business, forcing accountability on utility brass and fostering a more public conversation about its strategy.

Across virtually all major economic sectors, “activist investors” have elbowed their way into boardrooms clamoring for strategic overhauls during shareholder meetings. When the Madison utility proposed to saddle customers with a substantial across-the-board fee hike in 2014, RePower Madison used the annual get-together to make waves that reverberated across the power sector.

A coalition of investors interested in restoring customer control and keeping costs down used their stake in the utility to force an overhaul of that plan. While MGE had planned to pump up monthly fixed fees from around $10 to nearly $70 over a few years, shareholder blowback derailed the plan. The opposition reduced the monthly fee to $19 and created opportunities for customers to offer feedback through several dozen “community conversations” held last year.

In 2015, RePower Madison again proved boardroom leverage is a powerful tool to influence investor-owned utilities. The group’s push united investors in a call for greater accountability as MGE shapes its energy policy.

Together, they urged MGE to shift away from dirty power — it held stakes in multiple coal-fired plants — and flesh out its portfolio with renewables. Ultimately, MGE agreed to a compromise with a pledge to explore alternatives and see whether it could source a quarter of its electricity with renewables by 2025. If successful, this would match state renewable requirements in many states, including neighboring Minnesota.

RePower Madison’s twist on shareholder activism is just one piece of its multi-pronged approach to improving Wisconsin’s clean energy economy. The organization also focuses on maximizing community input on utility policy and educating the public on the pitfalls of dirty power.

Distributed Generation in the Crosshairs

The organization’s actions come at a time when Wisconsin’s most prominent investor-owned utilities — including MGE and We Energies, which serves Milwaukee — have been slow to adopt policies that align with greater demand for renewables and long-range sustainability.

Despite substantially chipping away at the fixed fee proposal, the increase still stung distributed generation. Similar fee hikes across the country threaten rooftop solar, skewing the cost-benefit calculus for such projects. Fixed fees amplify the cost burden even for customers who reduce their energy use or integrate renewables — both moves that ease strain on the grid and give customers more control over their electricity.

Due to increased scrutiny, MGE has made some improvements to its renewables strategy. In 2015, the utility touted a series of initiatives, including sourcing 30 percent of its power from renewable sources by 2030 and planning for a 500 kW community solar project in a Madison suburb.

Gary Wolter, MGE’s chairman and CEO, echoed clean power advocates when he discussed the project with the Milwaukee Journal-Sentinel. Challenging traditional utility values, he showcased that the community solar array will feed power back onto the grid and allow more customers to buy locally generated power.

“Importantly, it will give customers, some of whom could never install solar generation themselves, the opportunity to benefit from renewable energy,” he told the paper. The project, expected to serve 250 subscribers, notched approval from state regulators in 2016.

Still, one community solar project representing a fraction of total energy production will do little by itself to shift power to customers, especially when locally owned.

The utility reported that “a significant majority” of customers surveyed through its community meetings said it was important to them to have more control over their energy use. It committed to develop products and services to support that, potentially including additional community solar and pricing options that reward electric vehicle owners for off-peak charging.

But advocates say it remains to be seen exactly how much and how effectively the utility will factor consumers into its plans.

The utility’s playbook — specifically its reluctance to adopt transformative clean energy reforms — defies the city’s longtime focus on sustainability. More than a decade ago, Madison ushered in the Sustainable Madison Committee, a body formed within City Hall to spearhead green design and sensible energy policy.

One of the committee’s most notable actions was a developing a plan to push Madison to the forefront of energy innovation.

Achieving that goal will require substantial cooperation between the city and MGE, though the two have not solidified many specific plans for a partnership. So far, the joint effort does not go as far as Minneapolis’ first-of-its-kind Clean Energy Partnership, a formalized union between the city and the incumbent gas and electric utilities to further aggressive climate goals.

The MGE solar farm lines up with that broader vision, though its output remains relatively paltry. The project could, however, stir complementary grid upgrades to accommodate smart meters and rate design that rewards customers for shifting energy use to off-peak times. An existing utility-run program, Green Power Tomorrow, charges customers who opt in a premium for clean power (a practice that defies the low cost of clean power).

“MGE staff are looking forward to working with city representatives to determine how we can partner and where we can advance common interests,” MGE’s Wolter said in a July 2016 statement. “The work plan presents a valuable opportunity for the city and MGE to continue working collaboratively toward our shared goals of reducing carbon emissions, increasing renewables and deepening community engagement on energy issues.”

But while the city-led initiative redoubles pressure on the utility to cooperate on clean energy goals, RePower Madison remains committed to its core mission: pressing for deeper changes at the utility that favor renewable generation and community control. Mitch Brey, the organization’s campaign manager, told Midwest Energy News that delivering results will be key.

“There is always more that can be done and I’m hoping the city will not stop after they’ve passed this,” he told the news site. “It’s a start, and it’s clearly a clean energy victory and a victory for everyone in Madison.”

Originally published at ilsr.org. For timely updates, follow John Farrell on Twitter or get the Energy Democracy weekly updates.