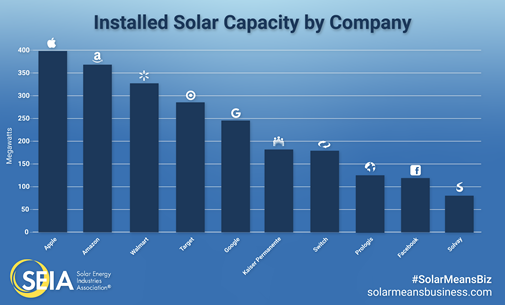 Tech giants, major retailers and other corporate leaders are making investments in clean energy. The group collectively installed 1,286 megawatts (MW) of new commercial solar capacity in the United States in 2019, the second largest year on record according to the latest Solar Means Business report. The annual report, released by the Solar Energy Industries Association (SEIA), tracks both on-site and off-site installations and highlights the strong appeal of cost-saving solar energy for American businesses.

Apple and Amazon remain in first and second place when it comes to the top corporate solar users, followed by Walmart, which installed the most solar in 2019 and increased its solar use by 35%. This year was also the largest year yet for onsite commercial solar installations with 845 MW installed.

Apple, which has the most off-site solar installed through 2019, now has nearly 400 MW of solar capacity in its portfolio and is committed to make its supply chain and products 100% carbon neutral by 2030.

The report tracks 8,358 MW of commercial solar capacity across more than 38,000 systems. Combined, the systems generate enough electricity each year to power 1.6 million homes and offset 8.9 million metric tons of CO2 annually. For perspective, each week more than 7.2 million people, or 2.2% of the U.S. population, shop at a Walmart store with a solar installation. Walmart also announced that it plans to power its facilities globally with 100 % renewable energy by 2035 and is targeting zero emissions across its global operations by 2040.

“As a signatory to The Climate Pledge, we’re committed to meeting the goals of the Paris Agreement 10 years early and reaching net zero carbon across Amazon by 2040,” said Chris Roe, Energy and Sustainable Operations Lead at Amazon. “As part of this commitment, we are well on our way to power Amazon operations using 100% renewable energy by 2025, with over 90 wind and solar projects across the globe.”

“Our growth in solar use reflects our ongoing and longstanding commitment to climate action, including getting to 100% renewable energy globally by 2035,” said Kathleen McLaughlin, Chief Sustainability Officer, Walmart Inc. “Reducing greenhouse gas emissions and avoiding the worst effects of climate change will take sustained, collective action. It’s terrific to see so many companies growing their solar use and taking steps towards a renewable future.”

Facebook, one of the top buyers of off-site solar is making its first appearance in the top 10 and made the biggest leap forward, jumping from 27th to 9th on the top corporate solar users list. Target, the company with the most solar capacity installed at its facilities, finished 2019 with a total of 283 MW of solar capacity. The company now has more than 500 solar projects in its portfolio.

Companies are also doubling down on their clean energy commitments. Several corporations on this list recently announced more aggressive clean energy goals, including Google, which is ranked 5th and now plans to run its data centers and corporate campuses on 100% carbon-free power by 2030.

Additionally, companies including Amazon, Microsoft and Solvay have announced new initiatives and investments to lower emissions and green their operations. Others, like Prologis, have goals for rooftop solar, and Switch and Walmart are beginning to use energy storage.

Abigail Ross Hopper, president and CEO of SEIA, stated, “Businesses are choosing solar energy because it can significantly curb their energy costs and add predictability during these uncertain times. We expect that the corporate sector will make greater investments in solar as businesses make and follow through on clean energy commitments to address the climate crisis.”

October’s sessions of POWERGEN+ are focused on Renewables and Energy Storage. If these topics interest you, click here to register!