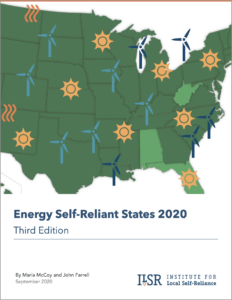 A report by Maria McCoy and John Farrell, released September 2020

A nation of renewable-powered, job-generating, self-reliant states is within reach – and necessary.

If each U.S. state took full advantage of its renewable resources, how much electricity would it produce? How much of its own electricity consumption could renewable energy fulfill? Would in-state renewable generation be enough to charge electric vehicles and power electric heating, too?

The answer, in almost every state, is a resounding yes.

In 2010, ILSR published the first national overview of state renewable electricity potential with the second edition of Energy Self-Reliant States (ESRS). At the time, only 32 states met the “self-reliant” standard and most states were setting ambitious goals to attain 25 percent renewable electricity. Now, several states and over 100 U.S. cities have made truly ambitious commitments to 100 percent renewable power.

Our maps illustrate nationwide renewable electricity potential from a wide variety of sources.

We have mapped out the state-by-state renewable generation potential of rooftop solar, onshore and offshore wind, conventional geothermal, and small hydro.

As before, we’ve also considered energy efficiency, creating a version of our all-resources potential map that considers the difference if all states could match their energy intensity to a state like New York (a decrease in energy use per dollar of GDP for most states). A new layer considers how renewables could meet the increased energy demand required for the electrification of vehicles and buildings. Finally, we present an all-resources potential map that imagines a state of both lower energy intensity and high electrification, where the state taps its renewable electricity potential to power more of the total economy.

The bottom line: improved renewable electricity technology would allow nearly every state to produce 100 percent of its electricity needs from local renewable resources.

For a complete introduction, page-long briefs on each renewable resource, and an appendix on our methodology, read the full report.

Want to dig even deeper into our results? Download the precise data in this Excel file.