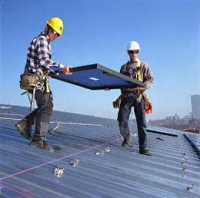 San Francisco, California [RenewableEnergyAccess.com] Taking a step closer to Governor Schwarzenegger’s goal of building a million solar roofs in ten years, the California Public Utilities Commission (PUC) issued a proposed decision yesterday to replenish the 2006 funding for businesses interested in installing solar power while also setting a deadline of December 15, 2005 to finalize a larger solar proposal intended to achieve the Governor’s broader solar goals that include residential roofs as well.

“The PUC can do a lot to advance the goal of building a million solar roofs in ten years and, with high energy prices upon us, the urgency of installing an alternative energy infrastructure has never been greater,” said Bernadette Del Chiaro, clean energy advocate with Environment California and a leading proponent of the Million Solar Roofs Initiative. “With today’s proposed decision, the PUC has essentially cocked the gun aimed at a robust solar program for all Californians to enjoy and we are anxious for them to pull the trigger bringing 3,000 MW of much-needed clean energy capacity to the state.” After the California legislature broke for the year without passing SB 1 (Murray), The Million Solar Roofs bill, Governor Schwarzenegger announced his intention of establishing sufficient rebate funds for a million homeowners, businesses, schools and farms to invest in solar power via the PUC. The PUC has the authority to establish ratepayer-funded programs independent of the state legislature, one of the three main policy elements of the Million Solar Roofs bill. This recent proposed decision would add $300 million to the Self Generation Incentive Program (SGIP), a pot of money available for systems 30 kW and larger typically installed on businesses, while lowering the rebate from $3.00 per watt to $2.80 per watt. The SGIP program is currently over-subscribed, having run out of money mid-2005. The California Energy Commission manages a separate pot of money for small-sized solar systems (smaller than 30 kW). This program, called the Emerging Renewables Program, continues to accept rebate applications but is likely to run out of funds in mid-2006 unless replenished by either the PUC or the legislature. Ultimately, the two programs are likely to merge together into a sort of “one-stop shop.” Meanwhile, two other policies, originally contained in SB 1, are needed to achieve the goal of building a million solar roofs in ten years. These two policies are a lifting of the existing cap on net metering — the ability for homeowners and businesses to capture their excess solar electricity in the form of a credit on their electric bill — and a requirement that all new homes come with solar power as a standard option. Both of these policy goals require legislation. Because California has two-year legislative sessions, any bills that were neither passed nor voted down during the first year can be picked up where they left off when the legislature reconvenes in January. The Million Solar Roofs bill, SB 1, sits on the Assembly Floor. The proposed decision was issued by PUC President Michael Peevey. A 20-day public comment period begins. Final decision is expected at the PUC’s final business meeting for 2005 on December 15th. The PUC’s proposed decision can be viewed on the web at the following link.