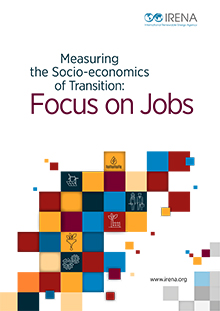 Measuring the Socio-economics of Transition: Focus on Jobs says that Asia could account for 64% of jobs in renewables by 2050, the Americas 15% and Europe 10%. The report also says that “coherent policy-making, adjusted for the economic and social context of each region, can deliver on climate and energy goals effectively and fairly.”

As of 2018, there were about 11 million jobs in renewable energy, IRENA says, with the most rapid expansion occurring in the solar photovoltaic industry (3.6 million jobs). The solar workforce is expected to expand by 63% by 2050, employing nearly 19 million people. The second largest renewable industry by employment in 2050 is expected to be bioenergy, at 14 million. Jobs in hydropower will undergo “comparatively moderate growth” of 7%, the report says, employing less than 3 million people by 2050.

Current plans, which is based on governments’ current energy plans and other planned targets and policies

Energy transition, which entails a large-scale shift to renewable energy, electrification and ramped-up energy efficiency in the period to 2050. In this pathway, the share of renewables in the power sector increases from 25% today to 86% in 2050.

In terms of geographic regions, renewable energy jobs are expected to grow in all areas, with the top five consisting of east Asia leading the way at 36% growth, followed by southeast Asia at 16%, rest of Asia at 12%, Latin America at 8% and North America at 7%.

The report drills down further by providing selected economic, regional and country analyses.