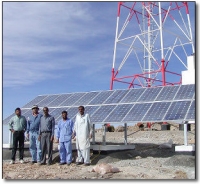 Solar-electric applications have enjoyed a steady transition from off-grid, battery back-up projects to grid-connected, battery-less systems. The recent boom of installations in California has been particularly telling of this trend. It’s easy to forget however, that one of solar’s greatest contributions is in remote power applications.

Masqat, Oman – February 6, 2004 [SolarAccess.com] And it doesn’t get much more remote than the top of a mountain range in the Middle Eastern country of Oman, where Perth, Australia-based Solar Sales, recently completed a series remote solar photovoltaic (PV) applications for local telecommunications company Omantel. The solar arrays provide power to remote communications towers that increase the local carrier’s mobile phone coverage network in several regions around a mountain range south of the capital, Masqat. Oman occupies the southeast corner of the Arabian Peninsula and borders Saudi Arabia and the United Arab Emirates in the West and the Republic of Yemen in the South. With a land area of approximately 309,500 km2 it is the third largest country in the Arabian Peninsula, and roughly the size of the U.S. state of Kansas. Omantel chose eight very remote locations, of which seven were only accessibly by helicopter. Solar Sales had to design a standalone solar power system for each location which took several factors into consideration including microwave power requirements, battery types and sizes, frame and foundation design and expansion possibilities. While designing the solar systems for these remote locations was no easy feat, simply getting all the equipment to the sites was the greatest challenge.

“Everything had to come in by helicopter and road access had to be done by earth moving equipment up inaccessible mountain slopes that were up to 2,500 meters high,” said Solar Sale’s Managing Director John Hall. “Once there on top of the mountain, the rock surface was extremely hard and it took a lot of work to level the site area and dig trenches for the cables and pour a concrete foundation for the solar array frame, battery hut and communication tower.” While your average “wrench” at a typical project site might be annoyed if they forgot an item back at the shop, it would be a costly mistake on this project. “If you are paying $10,000 per day for a helicopter you better make sure you have considered every possible item which may cause delays,” Solar Sales senior engineer Durmus Yildiz said. Yildiz, along with the Solar Sales team, designed the PV systems ranging from 1,440 to 2,880 watts peak solar power. All the systems use AstroPower AP-120, 120w solar modules and fully sealed, maintenance-free VRLA Gel battery banks.

Before the systems could even go in however, the locations had to be prepped. Solar Sales’ partner Specialized Services had the taxing task of leveling the mountain tops and pouring concrete foundations for the different projects. “This was by no means easy, as the rock matter is predominantly sedimentary and so solid that in the course of the project three jackhammers had to be totally replaced and it forced the civil workers to camp up to six weeks on top of the mountains in order to keep up with the project schedule,” Hall said. “Each group of workers (mainly from places like Pakistan, Afghanistan etc- No Oman workers here) were on each of these mountain tops for up to six weeks at a time and every two days the helicopter flew in more food and water to keep them going.” As if the remoteness of the site was not enough, the conditions were grueling for both the workers and the equipment. The temperatures in the area regularly rises to 48 degree Celsius, 118.4 degrees Fahrenheit in the summer, requiring a housing arrangement for the electronic equipment to protect it from the harsh conditions and keep it cool without energy-intensive air conditioning units. Solar Sales’ solution was to build passive-cooled shelters where the energy to condition an area is supplied almost entirely by the thermal energy available from the temperature variations which occur between day and night and between seasons.

With all these components in place, the remote communications stations will have a minimum of five to eight days autonomy from battery banks ranging from 300ahr to 720 ahr at the C/100 rate. There are no inverters involved since the electrical/communication systems run entirely off 48 vdc. The power demands on the systems fluctuate greatly since the sites are communications repeaters for the local mobile telephone network. If all goes as planned, the systems will be entirely self-sustaining for years to come. Nevertheless, Solar Sales’ local distributor will visit the sites every six months to check the systems for proper functioning, theft or damage. So how did an Australian company end up installing solar systems halfway across the world? From Mali in West Africa, to Tokelau in the South Pacific, it turns out the company has a knack for providing remote power, in remote places. The company has gleaned valuable experience from both their 20 years in the business and through their work providing solar arrays in the hot, unforgiving climate of northwestern Australia where the remote mining industries are located. All this action has brought considerable growth for Solar Sales which plans on floating their company on the Australian stock exchange in the next few months. Perhaps that will prove a more forgiving atmosphere than these remote locations they constantly find themselves in.