Flat-roofed urban buildings bake in the sun all day with no shade from trees, so they are the perfect place for solar panels. They can deliver power directly to where it’s needed without significant transmission loss. But roof space is limited so efficiency is very important.

TenK Solar of Minneapolis has developed a system that achieves amazing efficiencies on flat roofs by putting thin-film reflectors in the spaces between the tilted solar panels. To make this work, they had to rethink the way solar cells are interconnected: Conventional solar systems connect panels with a series string — and just like the old Christmas lights, the whole string goes dark if a single light is bad. Series connected solar cells have the same problem and worse: A tree or cloud shadow, a fallen leaf, or blop of bird poop can reduce the output of the whole string. If the cells are not matched and equally illuminated, efficiency drops significantly.

TenK has solved this problem by designing an entirely unique PV module.  They install six DC-DC converters in each solar panel that connect to the solar cells in a unique series/parallel arrangement that provides full output even when there are voltage differences or even failures. This unique cell connection method makes it possible to reduce the spacing between rows of solar panels, which are angled towards the sun. Shadows from the next row no longer degrade the whole system as they do with series connection so the tilt angle of the panels can be increased. The higher tilt allows rain to better clean the panels, reducing the need for cleaning as well.

A sheet of plastic with a thin film Coolmirror coating is laminated onto the reflector glass increasing energy output further by catching the sunlight in the spaces between rows and reflecting it to the panels. This would be impossible if the cells were series connected because the uneven lighting would degrade the whole system. The Coolmirror filtering prevents heat from the reflected sunlight from heating up the solar cells and reducing efficiency..

The efficiency gained by the TenK system is impressive. In Phoenix, Arizona, the system produces 20.6 kilowatt-hours (kWh)/year for every square foot of area! That means that a 10×20 foot rooftop system will produce 200 x 20.6 = 4,120 kWh/year. That’s enough to power an electric car 12,360 miles/year! 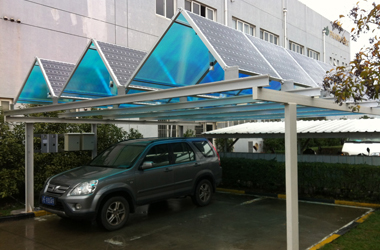 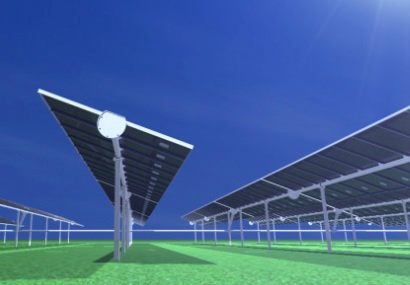 In less sunny places like Boston, the annual output would be reduced to 15.75 kWh/year. That means our 10×20 foot system would still produce 3,150 kWh/year.

The high efficiency of the TenK system compares very favorably with existing utility scale solar power plants. There are 43,560 square feet in an acre so we can multiply to convert the 20.6 kWh/ft2 to 897,336 kWh/acre annual production in Phoenix. That nicely beats the the 100-acre Jacksonville solar plant in Florida which generates only 243,000 kWh per year per acre. The Jacksonville plant uses thin film solar panels. High efficiency silicon panels can produce more like 350,000 kWh/acre. Sunpower’s Oasis technology (photo above) tilts the panels to track the sun and uses the most efficient silicon panels available, but it still only achieves a maximum 523,000 kWh/acre. The spacing needed to prevent shadowing more than offsets the efficiency gain of the tracker. Even two axis trackers with concentrating PV have a hard time competing.

Like all silicon chips, DC optimizers and microinverters are getting cheaper every day. They pay for themselves in the increased efficiency and reliability they provide, and the ease of installation. A study of large existing, single-inverter solar systems of various ages found that they were functioning in the real world at an average of only 66 percent of specified performance! Clearly, as chip prices continue to fall, more sophisticated, high-efficiency systems will become a no-brainer.

The integrated circuits optimize the photovoltaic cell outputs and convert them to into a single 110- or 220-VAC output that automatically shuts off if there is no load. This is a safety feature so the panel will not shock people who handle it before installation. The voltage inside the panel is limited to 15 volts, making arcing or shocks impossible. With conventional, series connected panels, voltages of 600 or even 1000 volts are common. Arcing, fires or electrocution of firemen or repairmen is possible at those voltages. All that is necessary to shut down the solar system is to turn off the building’s main power switch. A very safe design.

Solar power has finally reached parity with fossil fuel costs in some states, but “you ain’t seen nothin yet.” The solar systems we are building today will seem crude when we look back in the future. Remember the first computers? Solar systems of the future will be cheap, simple and mass produced. The free energy is there. All we have to do is collect it. 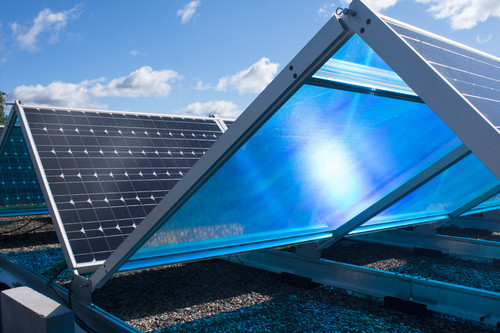