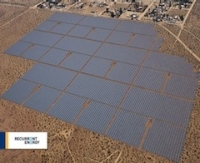 San Francisco, United States [RenewableEnergyWorld.com] Recurrent Energy has signed agreements with Southern California Edison (SCE) to develop solar photovoltaic projects. Under the terms of the deal, the utility plans tol buy 100 percent of the power from three of Recurrent Energy’s California solar projects. Recurrent Energy will build and operate the solar power systems, located in Kern County and San Bernardino County, which have a combined installed capacity of 50 megawatts (MW). The projects are expected to be completed in early 2013.

The three solar photovoltaic ground-mounted power systems, two in Kern County (6 MW and 22 MW) and one in San Bernardino County (22 MW), are sited on private land leased by Recurrent Energy and construction is expected to begin in 2012.

“These projects are a great example of the potential for distributed-scale solar to deliver significant quantities of power on relatively short timeframes,” said Arno Harris, CEO of Recurrent Energy. “Distributed-scale solar has an important role to play in helping to meet near-term renewable energy goals. This is a clear validation of our approach to developing and marketing solar power in California.”