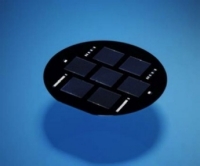 September 24, 2009 – Researchers from Sunovia and EPIR Technologies say they have made single-junction and two-junction cadmium telluride (CdTe)-based solar cells with highest-ever open circuit voltages, beating previous marks by 45% — roughly translating, all things equal, to a corresponding increase in power output.

First, the group describes what it calls a demonstrator of mechanically stacked, high-efficiency InGaP/GaAs/Ge triple-junction solar cells. This multijunction cell starts with a one-side contacted GaAs top cell (4μm thick) transparent for infrared light, by itself 23.4% efficient (close to that of standard GaAs cells). This cell is then transferred onto a Ge bottom cell creating a mechanical stack; the separately-contacted Ge bottom cell has a 3%-3.5% efficiency, higher than Ge bottom cells in leading monolithically stacked InGaP/InGaAs/Ge cells, the researchers note. The goal is to have a working triple-junction cell in early 2010.

Expected conversion efficiencies of the whole thing are expected to be 1%-2% higher than what is obtainable today with monolithic triple-junction solar cells, or >40% using concentrated illumination. The new cells also show what IMEC calls “enhanced spectral robustness;” stacked solar cells made from different materials have been proven to capture and convert more of the light spectrum than just one material.

“Mechanical stacks are more complex to handle and interconnect [but] offer a way to increase the conversion efficiency and energy yield of high-efficiency solar cells, noted Jef Poortmans, IMEC’s PV program director, in a statement. They also represent a more efficient use of new material combinations — in this case, leveraging IMEC’s experience in 3D stacking, growing III-V layers, and solar cell processing, he added.

Researchers from Sunovia and EPIR Technologies say they have made single-junction and two-junction cadmium telluride (CdTe)-based solar cells with highest-ever open circuit voltages, beating previous marks by 45% — roughly translating, all things equal, to a corresponding increase in power output.

The CdTe-based (II-VI) solar cells achieved open circuit voltages (Voc) of 1.34V in a single-junction configuration, >95% of the theoretical upper limit for the II-Vi alloy used, they say, compared with previous CdTe Voc of 0.91V, or ~76% of the max. A two-junction configuration reached Voc of 1.75V.

“There is no data in the literature that comes close to what we have achieved, and we believe that our two-junction device also represents the first ever high efficiency monolithic, two-junction solar cell using CdTe or any other II-VI material,” proclaimed Michael Carmody, senior director for development of photovoltaic materials at EPIR Technologies, in a statement. The two-junction II-VI cell is expected to exceed 35% production efficiency at “a small fraction” of the cost of three-junction III-V cells; a triple-junction II-VI cell is expected to have even higher efficiency “without much added cost,” he said.

The two firms are currently working to complete 100MW of initial production capacity at their expanded pilot production facilities, with a cell manufacturing process that “requires substantially less space than competing solar technologies, and is scalable at a fraction of the previous cost,” partly helped by using a silicon substrate.

Q-Cells AG says it has reached 15.9% conversion efficiency (certified by the Fraunhofer ISE) for its polycrystalline silicon solar cells, a world record for mass-production using “common industrial standards.” The 249W module built with the cells was made on Q-Cells’ €50M “Technikum” pilot line in Thalheim.

The new cells based on a “new-generation” poly-Si produced in the company’s production lines have shown up to 17% efficiency, and are targeted for launch sometime in 2010. However, this is “only the beginning,” assured company chairman Anton Milner, in a statement, noting that the new mark shows the competitive prowess of both the company and Germany as a whole — “especially compared to more commoditized producers using standard technologies in low-cost countries.”

P-type silicon solar cells are the most common ones today, but n-type cells offer better PV electricity production thanks to properties like greater impurity tolerance, and it does not suffer from light-induced degradation as does p-type Cz silicon. The end result is better efficiency or lowered manufacturing costs using less-expensive silicon, notes Martin Hermle, Fraunhofer ISE’s group manager, in a statement.

P-type solar cells have a p-type base and thin n-conductive layer; in n-type solar cells the emitter is p-doped through boron diffusion or added Al. Among key problems in using n-type silicon as a base solar cell material is that the sun-facing emitter’s passivation, doped with boron, can’t be optimally passivated with conventional layers such as SiO2 or SiNx. Working with the Technical University of Eindhoven, Fraunhofer says it has solved front passivation by using aluminum oxide (Al2O3).

A 2×2cm2 n-type cell was shown to achieve 23.4% conversion efficiency; a bigger cell (12.5×12.5cm2, “using much simpler process stages close to industry practice” — including a screen-printing application of the aluminum alloy emitter — reached 18.2% efficiency. The researchers say they will further tweak the process technology to push the commercially-viable silicon solar cells to exceed 20% efficiency rates.

Suntech Power says it has built a 16.53%-efficient multi-crystalline silicon module (confirmed by the Fraunhofer Institute for Solar Energy Systems), exceeding its own just-achieved record mark for conversion efficiency.

The module is powered by the company’s Pluto PV cells, each with “well over 17%” efficiency, the company added.

The new efficiency mark is nearly a full point better than the 15.6% the company proclaimed in August, which itself squeaked past Sandia Labs’ 15-year-old mark of 15.5%.

The new mark represents “a clear margin over other multi-crystalline silicon photovoltaic technologies” and sets “the new benchmark for the highest performance multi-crystalline module,” said Martin Green, research director of the ARC Photovoltaics Centre of Excellence at the U. of New South Wales in Australia, quoted by Suntech in a statement.

Suntech chairman/CEO Zhengrong Shi says in a statement that it proves something else: “that it is possible to combine both first-class R&D and low-cost manufacturing into a commercially viable business model that will bring clean alternative energy to the world’s growing energy demands.”

The record mark, achieved thanks to what the company’s thin-film CTO Johannes Meier called “several innovative modifications of key processes” — including proprietary TCO front and back contacts — “serves as basis” to push the company’s achieve Micromorph PV technology to production modules with stabilized efficiencies of 10% or more.

He said the company is confident the record-efficient cells would be transferred to mass production “soon,” with price-competitive (vs. conventional energy) PV module production lines ready by the end of 2010.