Who can forget Joe the plumber? He was rather an infamous part of in the last campaign. In truth though Jersey City exterminators, Chicago fire fighters and San Francisco Teachers were just as important, albeit less infamous. The election rested upon average, everyday people. By the looks of a recent study, as well as a brief glance at the current political climate, history may be repeating itself. 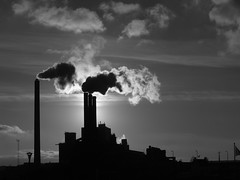 Recently a survey conducted by Yale and George Mason University on American attitudes on climate and energy reported that a massive three out of hour U.S. voters favor regulating carbon dioxide as a greenhouse gas pollutant. Furthermore, the majority think global warming should be a top priority for both Congress and the President. On a more controversial note the survey also found evidence that most Americans would vote for a candidate who raised taxes on fossil fuels that emit climate-changing carbon dioxide when burned such as coal, oil and natural gas, while cutting income tax in a revenue-neutral so-called “tax swap”. According to Reuters, “Sixty-one percent of Americans surveyed said they would be more likely to vote for a candidate who supported the tax swap, while 20 percent said they would be less likely”. This political gambit would not only add to federal revenues but would significantly change where such revenues came from. Many key political players have long discussed similar maneuvers.

Although Democrats have long been seen as being more progressive and “greener” than Republicans and Independents alike, the survey discovered notable majorities of all three groups favored the tax swap and other remarkable eco-friendly policies.

Interestingly, there is a noteworthy gap between voters and Congress. Although Republican voters still favored this move by a concrete two-thirds majority, nearly all congressional Republicans have opposed it. According to Anthony Leiserowitz of the Yale Project on Climate Change Communication, “You do have to draw a distinction between the members of Congress and the broad public … The two parties have now become more and more ideologically pure … and that is not true among the public at large…”. A separate survey was released by the non-profit Civil Society Institute in short order. It found that 76 percent of Americans believe that the U.S. should be moving towards sustainable energy, supporting energy efficiency and investing in renewable energy like solar panels for sale, while actively reducing dependence upon nuclear power, natural gas and coal.

Interestingly, the survey was released just after President Barack Obama suggested publicly that climate change would become a campaign issue this year. “I suspect that over the next six months, this (climate change) is going to be a debate that will become part of the campaign, and I will be very clear in voicing my belief that we’re going to have to take further steps to deal with climate change in a serious way,” Obama said. Doubtlessly, the other candidates will be all too happy to voice their thoughts on this matter as well. It would appear that Obama may be spot on with his prediction.