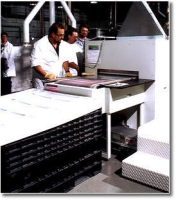 Three weeks ago SolarAccess.com offered our readers a chance to comment on how the U.S. PV module shortage is effecting the solar industry, individual businesses, installations and peoples’ lives and livelihoods. We heard from you — consumers, PV installers, dealers, manufacturers, and industry leaders — nearly 50 responses helped to create a well-rounded perspective of what is clearly a significant problem to the U.S. solar industry.

August 20, 2004 Three weeks ago SolarAccess.com offered our readers a chance to comment on how the U.S. PV module shortage is affecting the solar industry, individual businesses, installations and peoples’ lives and livelihoods. We heard from you — consumers, PV installers, dealers, manufacturers, and industry leaders — nearly 50 responses helped to create a well-rounded perspective of what is clearly a significant problem to the U.S. solar industry.

The convergence of many issues have created a problem that will not go away quickly. Strong European market demand, currency rates favorable to the Euro, desire and necessity for module manufacturers to maximize their opportunity for profitability, limited manufacturing capacity and limited supply of raw materials, lack of stable financial incentives — and on, and on.

We don’t have the solution, but have summarized the responses that clearly define the issues pertaining to the PV shortage.

We will continue to track this story as it unfolds over the coming months, and as always, keep you informed.


“Much of the current volatility in the module market is driven by the erratic pattern of financial incentives that are in place. Changes in the German “feed-in” law have resulted in substantially higher demand, resulting in production from around the world — including the U.S. — going to Germany to serve the market there. The PV market will continue to exhibit this kind of volatility until we convince policymakers to provide long-term, sustainable support for the industry rather than the “here today, gone tomorrow” approach that has plagued both the solar and wind industries.” – From Tom Starrs


“The module shortage has been incredibly difficult for us as a installer. It has put virtually very project in limbo. At first it sounded like the shortage would likely be temporary, and we might see some relief in September/November. As every month passes the expected relief get pushed out farther.” – From Michael Hall


“Indeed, there seems to be a shortage, especially for new entrants in the business. The dominant reason for the shortage is the dramatic expansion of the German market and the US expansion, especially in California and New Jersey. An additional factor is the need to bid projects for approval by state or government programs with budget quotas and the long lead time for large projects. There is much “double ordering”. The industry will greatly increase capacity in the next six months, so that we could see an over supply by the end of the year. Isofoton, Solar World, United Solar, First Solar, Sanyo, GE (Astropower) are all working to increase production on the near term. Prices are firm to up 10%, but we can and will weather the storm.” – From PAUL MAYCOCK


“I see it as a good sign, and I’m very supportive of the growth of this industry. This is evidence of a ‘growing pain’ indicating the upcoming global expansion phase long overdue.” – From Anthony Fogleman


“For years we have heard some skeptics claim that environmentalism comes at the cost of American jobs. The domestic photovoltaic industry was one of the most successful rebuttals to this claim. I worry that any decrease in American production may not only lead to short term price increases, diminished availability and reluctance for developers and planners to place new orders but may also further the outsourcing of American jobs which pay enough to live on. More Americans out of work or struggling to make ends meet with smaller paychecks doesn’t strike me as a way to increase the sales of PV.” – From Paul Stillwell


“Every US company is at manufacturing capacity. This is good as European, Japanese, California (and some other States) and 3rd world markets are going full bore. This will drive increased capacity and further investment in PV, and that’s good news for the industry and consumers.” – From Scott Sklar, Exec Dir, SEIA


“As a solar contractor in NY, I am concerned for the short term, as I have a number of projects waiting for available modules. In the long term, any global increase in demand should encourage Solar manufacturers to increase investment in manufacturing capacity, which should ultimately increase supply, and possibly lower costs, making solar even more affordable.” – From “Mike”


“I’m working on the switch gear and wiring design for a 400kw system that is very near receiving CEC funds but so far we have not been able to secure modules. Even some 10 and 20 kW projects are put on hold due to the shortage.3kw to 5kw and a little more can be completed with creative ordering and some begging to distributors. I do believe the shortage is relatively short term though. With the high demand suppliers will gear up for higher volumes.” – From Larry Elliott


“Considering all of the above, we believe that a short-term shortage, or limit to growth may be good for the industry, allowing companies time to financially stabilize their operations. The shortage also allows the industry to have an open door for other companies to invest, seeing an unfulfilled product opportunity.” – From Jeff Wolfe


“Free market forces will and should prevail the fate of PV. It is inevitable that foreign production will increase at our domestic industries expense. For most of the world demand is driven by different economics making alternative energies more viable. Many foreign industries lead in areas of energy efficient products. On the flip side competition from cheaper foreign imports may eventually make PV cost effective economically here.” – From Robert Worthington


‘The possibility of the situation has been evident since Germany passed its renewable energy law, providing a financial basis for the rise of PV power plants.” – From Michael Kujawa


“There is significant demand for PV in Europe, (Germany in particular) coupled with a very favorable exchange rate. When added together, they make a strong business case for selling as much product as possible in Europe. Unfortunately, the US case is a weak one. The majority of PV applications are taking place in two states (CA and NJ), dependant upon state rebate programs that are on again off again. The US marketplace is in disarray. Many states have their own politically driven RPS often backed by non-existent or poorly funded initiatives. Politicians think that giving renewable energy lip service is enough.” – Anonymous


“I can appreciate the fact that profit margins drive business, however, to create a shortage in the US by dumping all available inventory into Europe to make more money is upsetting.” – Bill Condit


“With the shortage of manufacturing jobs in the US, it makes you wonder about the lack of production. But one thing is for sure, if you, “follow the money”, it will lead you to the truth as it always does.” – Anonymous


“The lack of supply of solar modules represents just one more obstacle for solar contractors who do business in the third largest market in the world, California. The Emerging Renewables Program has been, and will continue to be, a hindrance to contractors across the state. How can you run a business when every six months you have to contemplate an exit strategy in the event that the CEC rebate disappears? It is highly probable this coming December will be no different. Come on Governator – put your girly man words in stone! Come on CalSEIA, go to bat for your constituents!” – From Sunny Powers


“Overall I this is exciting news, because it means PV is being purchased and installed at increasing rates, and Americans always want what they think they can’t have and will push for grater access and information which may be just what the market needs.” – From Whitney Kirk


“The investment (and probably over-investment) in module capacities in the US that will probably arise out of this situation may even lead to a fall in prices in 2005 and beyond, which in turn could actually boost the uptake of PV technology not only in California but also in other states that have seen the light of the sun…” – From Rajesh Hatkar


“The near-term economic arguments against PV are strong, considering that rebates typically provide the majority of the cost of a system. High prices in a supply/demand scenario will only reinforce that negative opinion. The solution is a performance based long term approach.” – From Thomas