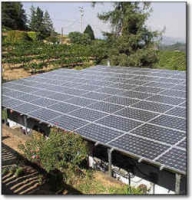 Novato, California [RenewableEnergyAccess.com] In keeping with its policy of “living lightly on the land,” another of Sonoma County’s wineries is going solar. The Raymond Burr Vineyards, known for both their winemaking and exotic orchids, are now the owners of a 30 kW solar photovoltaic (PV) system.

The PV system, designed and installed by SolarCraft Services, will power major winery operations, including the tasting room, storage facilities, and two greenhouses used for raising orchids. Two homes on the Dry Creek Valley property will also be run by the solar electric system. At least while the sun shines, the system will provide 100 percent of the electric needs of the major operations on an annual basis. Construction of the project, which consisted of 208 Sharp solar panels, was completed two weeks ahead of schedule. A total of 13 PV-Powered PVP2800 2.8kW inverters were used. SolarCraft installed a roof mounted system on two separate buildings at the Vineyard, the wine storage room and the guest residence. These two buildings have peaked roofs with large flat surfaces suitable for solar panels. SolarCraft also installed insulated foam roofing and a trellis shade structure to further improve the energy efficiency of the buildings. The SolarCraft team removed an aged wooden trellis patio shade on the main residence and re-engineered a new steel structure which now supports solar panels as well as provides energy saving shade to the SW side of the residence. The mounting system was a custom engineered hot dip galvanized steel strut rack that was flush mounted on one building and tilted on the other. The foamed roof used Professional Solar Products’ Fastjack aluminum stancions and integrated into the foam roofing material. Robert Benevides, owner of the Vineyard, said that he decided to install the system to complement the Vineyard’s current environmental practices, as well as to save money on its operations costs. “I am a life member of the Sierra Club, and I have always been an environmentalist,” he said. “Solar is a great way to go and will expand our environmental portfolio. Wineries need to reduce their impact on the environment and solar is one way to do it. We want those who enjoy our wines to know they were made with green power.” Benevides said the system would also help to control costs at the vineyard. “Wineries certainly do use a lot of power,” he said. “We have to irrigate the grapes, which means during the summer we have pumps going almost continually. Our tasting room is open seven days a week, and we have power throughout the tasting room and storage facilities.” Raymond Burr Vineyards will receive a rebate of approximately 50 percent of the cost of the system from the California Energy Commission and will save up to $18,000 per year in electrical expenses. The vineyards are named in memory of the actor Raymond Burr, star of the TV series Perry Mason and Ironside. Burr first planted grapes on the property in 1986, which he co-owned with his partner and colleague Robert Benevides, Executive Producer of Ironside.