LONDON — In the volatile photovoltaic industry, there is not a lot of time to pause for reflection – this ain’t Walden Pond, after all, for those who know their Thoreau: “Our life is frittered away by detail, simplify, simplify.” In this fast moving, detail-strewn industry, it seems all fritter and no simplification, but fritter we must. What follows is a very brief pause for reflection – but we shouldn’t pause for long.

Mid-year finds average module prices down for all technologies, with reports of some thin films at ~80 US cents/Wp (this is a region-specific price for a-Si), and prices for some c-Si manufacturers at <$1.40/Wp. Sufficient inventory on the demand side is leading to installer-installer sales, further pressuring down prices for technology manufacturers. The price pressure on technology manufacturers is unlikely to ease in the future as lower incentives push prices down, under the assumption that technology prices correctly represent manufacturing costs. Figure 1 (below) presents average prices over time in the PV industry. Though costs have fallen consistently since the beginning of the terrestrial industry, prices have increased during periods of profit taking and decreased to at or below cost during periods of aggressive pricing for share and slow demand. 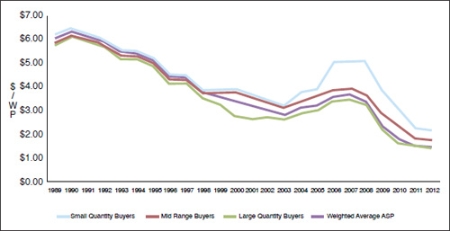 Given thin-film and crystalline prices for 2006-2011 (see Table 2 below), we can conclude that thin-film prices are being pressured down by inexpensive crystalline product. This situation is pressuring margins for all technology manufacturers in regions other than China.

Announcements of average technology prices at year-end of ~$1.00//Wp for c-Si abound, along with forecasts of an Armageddon-like 2011 in terms of demand keeping pace with enthusiasm over the market in the US based, apparently, on frantic buying as the grant-in-lieu of Investment Tax Credit (ITC) runs out its clock at the end of the year.

The strong growth experienced by the PV industry in the past five years (at a compound annual rate of 65 percent) is not due to luck, nor is it due to global recognition that a switch to renewables is imperative to the survival of the planet. This growth is due to decades of technology development, market development, business strategy development and anxious lobbying for the incentives that drive growth towards grid-connected applications. In 2010, the industry reached multi-gigawatt scale in terms of annual growth and cumulative capacity. Over 40 GWp of PV technology has been shipped into global markets, and 91 percent of it shipped between 2005 and 2010.

This level of cumulative capacity on the demand side is due completely to incentives, and primarily to the feed-in tariff (FiT) model that began in Germany. All PV industry pioneers persevered through the incentive-drought years, but the specific individuals responsible for Germany’s EEG Law are Dr Hermann Scheer, Dr Klaus Topfer, Dietmar Schutz, Hans-Josef Fell, Sigmar Gabriel, Josef Goppel and Jurgen Trittin. It is important to remember these names, and it is important to remember all the lessons learned since the early 1970s because the incentives that drove the industry to its heights are changing.

Figure 2 (below) presents the growth of the PV industry, globally, from 2005 through an estimate for 2011. This preliminary estimate for 2011 is based on the conservative forecast and takes into account current incentive levels and changes in FiT programmes, in infrastructure (transmission) and in country and US state debt and income levels, among other variables. 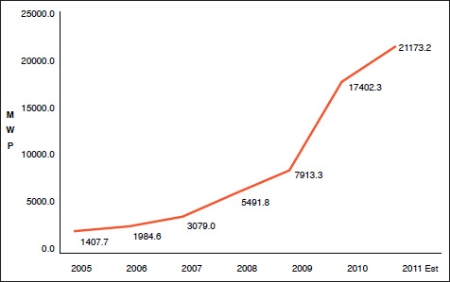 INCENTIVES: GIVEN AND TAKEN AWAY (OFTEN FAST)

The feed-in tariff (FiT) incentive (initially) provided a stable base for investment. The rules were simple – a system was installed, and a payment provided at a certain rate for, typically, 20 years. It was not long after the beginning of the FiT age (as it will someday be known) that investors recognised PV as a stable investment. One result of this recognition was that systems grew to multi-megawatt size. These multi-megawatt fields (utility scale) sprang up in response to the FiT. Without the FiT, it is unlikely that these large applications would dominate the market now. That these extremely large installations coincided with a global financial crisis helped to hide the fact that this application category also overheated markets, leading to rapid (and ever more rapid) changes in FiT rules and rates and now, candidly, to a fall in the incentive’s popularity.

To be clear, governments do not seem ready to “dump” the FiT altogether, but they are certainly committed to controlling it. There are good examples of control and bad examples. Germany stands as a good example, as it is forcing the FiT down in response to market behaviour. The UK stands as a bad example for changing the rules before its tariff even got to mid-stream. Other examples of bad behaviour come from Spain, where new rules act as a retroactive degression, and the Czech Republic, where a retroactive tax, well, acts as a retroactive degression. Thus was instability injected into what were formerly viewed as stable incentives.

Other countries are toying with auction-based FiTs (that act as power purchase agreements) with varying degrees of success. Unfortunately, the auction process assumes a rational bidder in an industry that requires an incentive of some type for a market to develop. In this climate, as with the stable incentives, the actors will act against their own best interest to win. In the case of stable FiTs, the actors will overheat the market (even as the tariff rate decreases) in order to avoid losing out.

Regarding this final behaviour, this means that despite the low tariff in Germany (which thankfully decided against a mid-year decrease), and despite problems with Italy’s tariff, these markets will experience strong activity towards the end of the year. In general, the industry does not favour caps, but hard annual caps would ensure that markets did not overheat and collapse.

The first half of 2011 has been slow in terms of actual work and accelerated in terms of announcements. At least one large system (CSP) broke ground, finally, in the US only to find progress stalled by concerns about the welfare of endangered species and Native American cultural issues. Activity in Germany was slow enough for the government to put off the mid-year degression. From January 2011 to the end of April 2011 about 715 MWp were installed. During the same period of 2010, 1.2 GWp were installed, a difference of more than 450 MWp. At an average of 178.8 MWp per month (granted an unlikely scenario), Germany could install under 2.5 GWp in 2011 – though, again, this is unlikely. However, likely or not, a significantly slower market in Germany must be considered.

The German system includes a premium for self-consumption that should serve as a model for other countries when developing FiT policies – if, indeed, these policies continue. The current trend toward PPA-style FiTs with rates based on auction does not favour system owners. Self-consumption tariffs encourage use of PV as a distributed generation source, also encouraging energy consumers to own the means of electricity production rather than rent electricity from the utility. The step function for reduction of the German tariff is as follows: 3500 MWp in new installations, 9 percent degression; 4500 MWp, 12 percent degression, and so forth.

For Italy in 2010, with reports from the government itself that a likely 6 GWp had been installed, it appears that 2.3 GWp is closer to the truth (though far more was shipped in than was a) installed and b) approved). Changes to the tariff are not robust enough to slow demand, while the controversial 10% bonus for EU content is a problematic boon to European manufacturers. The domestic content bonus is problematic because it is very difficult to police the internal content of a module and, frankly, the price of modules will likely increase. The rhetorical question is simply: Is the bonus more of an incentive than less expensive technology manufactured elsewhere?

The tragedy in Japan, which must not be forgotten, provided a necessary and ugly reality check for everyone about what happens when something goes wrong with nuclear power. Germany has made significant changes in its policy because of the tragedy, and the solar market in Japan is currently quite strong and likely to top 1 GWp in 2011.

On 27 June in the US, emergencies at two of the country’s nuclear facilities will hopefully give its politicians pause when considering new investment in the technology while encouraging investment in solar and other renewables. The nuclear facility in Los Alamos, New Mexico, was threatened by a fast-moving wildfire, while the Fort Calhoun facility in Nebraska was threatened by flood. Candidly, it is unlikely that these near-disasters will foment an immediate change in US policy, but they should lead to some pause before further commitments – essentially, how is ‘too expensive’ defined?

North America has a mix of good and possibly bad news. The US had a slow start, with California underperforming and New Jersey experiencing early strong, and likely sustainable, growth. The grant-in-lieu of ITC is set to expire at the end of 2011, which should help module sales into the US at the end of the year. Unfortunately, a sluggish economy and the 2012 election will likely keep US growth flat at under 1 GWp in 2011 (see Table 1 below). Utilities in the US are also finding that meeting state renewable portfolio standard (RPS) requirements is expensive, and a hard look at the penalties for noncompliance is important before too many plans based on RPS requirements go forward. In Canada, if the October elections in Ontario bring a conservative shift, its still-promising FiT could be a casualty. Table 1 (page 24) offers a forecast for the US by application.

For most markets, particularly for multi-megawatt installations, infrastructure (transmission and distribution) concerns are a roadblock even in a perfect incentive world. Some programmes are beginning to more visibly favour self-consumption, which highlights the distributed generation attributes of PV technologies.

So, mid-year with demand low, prices lower, expectations and inventory high and anxiety growing. Truthfully, eventually there will be a correction, though it may not come while manufacturers are willing to, essentially, give product away. As always on the technology side, the PV industry is only limited by its willingness to lose money.

Currently, with inventory increasing and demand flat, prices will decrease along with margins and more pain will be felt. During 2011 demand will grow, primarily because current capacity levels will not allow otherwise. Inventory in the PV industry is becoming a serious issue, gaining importance along with rising capacity levels (see box panel on page 27).

Figure 3 (below) offers a picture of industry capacity and shipments to 2015. Shipments are a reflection of demand, though a murky one. Essentially, demand and supply operate like an accounting ledger and both sides must work out to equal numbers. Production and installation are different figures. In 2011 installations will lag, perhaps significantly, behind shipments, with inventory complicating the situation. Currently, much of the held inventory is in China.

Capacity continues to increase despite slow demand in 2011, primarily because of industry expectations of the next boom in demand. Outsourcing and rebranding, historically common in the PV industry, continue, particularly with low prices from manufacturers in China. In fact, even manufacturers in China are outsourcing for lower-priced technology.

This year will see growth, but it will come with prices that are too low to support healthy margins. The largest growth will likely be in announcements, many of which will be cancelled. Meanwhile, the global economy continues to recover too slowly, while debt levels in countries such as Greece threaten to upend fragile growth. The PV industry, and solar in general, will need to develop business strategies that do not rely on incentives. Stoppage is highly unlikely. Unused capacity is expensive, and there is just too much unused capacity to ignore.