More
Home Solar How PV Manufacturers Are Driving Down Costs 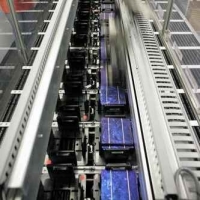 California, United States [RenewableEnergyWorld.com] For the last two years, solar companies have been buzzing about how they would soon reach “grid parity,” or the point at which renewable energy would be price-competitive with conventional electricity. In those years – during a silicon shortage that kept the supply of solar panels below demand — manufacturers were working to grow capacity as fast as possible, and a number of companies, including Sharp Corp., SunPower Corp. and Showa Shell Sekiyu announced plans to build 1-gigawatt factories. But things have changed.

Now, the industry is in the midst of a solar-panel oversupply. A cap on the Spanish incentive program is expected to reduce its market to 500 megawatts this year after it grew to the largest in the world — at more than 2 gigawatts — last year. That, combined with a big slowdown in project financing, has reduced global demand to a forecasted 3.75 gigawatts this year even as the industry’s production capacity reaches 11 gigawatts, said Paula Mints, a principal analyst at Navigant Consulting (NYSE: NCI).

And while there is some dispute about the exact size of the overcapacity (some industry experts suggesting that it might be overhyped) nonetheless, it’s clear that prices for solar panels are rapidly declining, with some solar manufacturers reportedly selling at a loss. According to SolarBuzz, panel prices fell for the seventh month in a row in July, to $4.56 per watt in the United States and €4.44 (about $6.31) per watt in Europe. That compares with U.S. prices of $4.83 per watt and European prices of €4.70 (about $6.67) per watt a year ago.

Solar companies “are tightening their belts quite a bit and learning to live with less,” said Ron Kenedi, head of the Sharp Solar Energy Solutions Group, at Intersolar North America earlier this month.

Manufacturers are under pressure to slash prices — and, if they want to stay in business, their costs — in many cases without the benefit of being able to further expand their capacity and take advantage of economies of scale. Many of them plan to expand capacity once the market picks up again; Mints and other analysts expect to see a turnaround in 2011. But in the meantime, a number of companies are taking innovative steps to try to cut costs now, and to make their products stand out above the crowd.

Craig Lund, vice president of business development at MIT-spinoff 1366 Technologies, a startup focused on improving the manufacturing of multicrystalline-silicon panels, said at the conference that he’s seen increased industry interest in new technologies in the last nine months. “Companies are really thirsty for new technologies that can differentiate them,” he said. “Nine months ago, all they wanted to talk about was scale and getting [production capacity out there]. Now it’s ‘How do I differentiate myself?’ So the tide has really turned.”

One of the most obvious ways companies are trying to cut costs is by developing new materials, such as thin films. Instead of relying on crystalline silicon, thin-film companies are making panels that use cadmium-telluride (CdTe), amorphous-silicon (a-Si) or copper-indium-gallium-deselenide (CIGS) material, for example.

First Solar (NSDQ: FSLR) has had the most prominent success so far, producing more than 1 gigawatt of cadmium-telluride panels and reaching an industry-low manufacturing cost of US $0.93 per watt in the first quarter. Other companies haven’t yet caught up, and sinking silicon prices — which are helping crystalline-silicon-based technologies to cut costs — could make thin-film companies less competitive than they might have been during the silicon shortage. One of the main advantages of thin film is the fact that they use little or no silicon compared to crystalline-silicon panels, but that is less of a plus now that silicon prices are plummeting, especially since thin films are less efficient at converting sunlight into electricity.

To cut costs and increase efficiencies, thin-film companies are developing new ways to deposit their materials. SoloPower, which is making CIGS panels, uses electricity in a low-temperature process called electrodeposition. Mustafa Pinarbassi, vice president of technology development at SoloPower, said at Intersolar that the process could significantly cut costs and increase deposition speed, though he didn’t disclose the company’s cost per watt. At the same time, Applied Quantum Technology, which also is developing CIGS technology, is using a process called reactive sputtering that it also claims can reduce manufacturing costs.

Meanwhile, Signet Solar, a company that uses an a-Si solar-manufacturing line from Applied Materials (NSDQ: AMAT), has said it is already seeing manufacturing costs of less than $1.50 per watt. Applied Materials is working on a number of ways to boost the efficiency of the a-Si films produced by its machines. One possibility would create an alternative structure using the same machines by changing the sequence in which the panels are manufactured, said Charles Gay, president of Applied Solar at Applied Materials. The company also is working on techniques, including one using silane to improve the quality of hydrogen bonds in the films, which could keep the panels from degrading as much in light. As it is, 45.3 percent of cell failures are a result of corrosion from UV light or other sources, Gay said.

Conventional crystalline-silicon panel makers aren’t standing still, either. According to an Applied Materials’ chart citing information from research firm Photon Consulting and Deutsche Bank, technology improvements, as well as moves to use less materials and more advanced automation, could drive average manufacturing costs down from US $2.04 per watt today to $1.47 per watt by 2011. Those numbers assumed a fixed cost of $55 per kilogram for silicon, which is far lower than the prices the industry had been seeing in the last few years and — in the downturn — still lower than the $60 to $80 per kilogram cited by Barron’s, although some predict prices could fall further.

Ken MacWilliams, vice president of crystalline-silicon technology and new products for Applied Materials’ Solar Business Group, said the comany is working on a series of improvements to reach those forecasts as soon as possible. (Applied is the world’s largest provider of manufacturing equipment for crystalline-silicon solar.)  One thing the company has done to help its customers reduce costs is develop a system of software and networked hardware that connects up different tools — including competitors’ tools — in its customers’ factories to maximize their efficiency, he said.

Applied is working to reduce the thickness of the silicon wafers that go into the panels. The company is developing a wafer saw that it believes could reduce wafers from 200 microns in 2008 to 120 microns in 2011, cutting silicon consumption more than 33 percent, MacWilliams said. It’s not as easy as using a thinner wire to saw the wafers. Thinner wires require more tension to saw through wafers, and that usually ends up breaking the wires. Applied has come up with a system that uses two wires on two separate spools — overlaid on the wafers — to be able to cut the wafers thinly without breaking the wires, he said.  [Editors note: for more on slicing wafers to reduce costs in solar cells, see this article.]

In addition, the company is working to improve the passivation layer, which is an anti-reflective coating that protects the panel from the elements and absorbs light, to make it more effective and easier — and cheaper — to make. It also is looking at giving panels all-back contacts, MacWilliams said. That involves moving all the electricity-conducting metal to the back of a panel, so that light moves through the panel — instead of being reflected off — and any light that isn’t absorbed by the time it hits the back bounces back through the panel again. SunPower Corp. (NSDQ: SPWRA, SPWRB), for example, already has back contacts, which helped it achieve the highest efficiency in the industry.

Another potential improvement involves a Baccini line that would double print thinner lines of conductive pastes on solar panels, he said. The double printing of conductive lines on top of one another would mean that Applied would need only half the grid lines as usual, reducing the amount of shadowing caused by those lines and increasing the amount of electricity the panel could produce from the same amount of sunlight, he said. The silver grid lines also would be thinner, reducing the amount of expensive conductive material needed, MacWilliams said, adding that Applied could introduce this technology within a year.

Meanwhile 1366 Technologies, is developing technologies that it claims can boost multicrystalline silicon cells from 16 percent efficiency to 18 percent efficiency, thereby reducing their cost per watt. The startup, which raised $12.4 million last year, has developed technology that gives solar panels a honeycomb-like texture, which 1366 claims increases internal light refraction and boosts panel efficiency some 0.6 percent. Like Applied, 1366 also is developing a technology to reduce the amount of silicon wasted in slicing ingots into wafers.

But 1366 is taking a different approach from Applied on metal contacts. Instead of moving the contacts to the back, the startup is developing a grooved busbar, the metal strips that conduct electricity on the panel, which would increase internal refraction, boost efficiency and eliminate the need for back contacts, according to the company’s VP of business development, Craig Lund. The innovation also allows for 80 percent narrower busbars or fingers, reducing the amount of expensive silver needed on the panel, he added.

The Next Big Thing

The industry is looking at high- and low-tech ideas to reduce costs. Take nitrogen and hydrogen gases, for example. Starting at 150- and 200-MW factory sizes, manufacturers can save money by generating those and some other gases on-site instead of buying them externally, said Anish Tolia, head of market development for gas supplier Linde Electronics.

Rainer Gegenwart, CEO of Masdar PV, said he expects to see solar companies start to collaborate in order to purchase materials — including “glass, foils, gas, everything” — in bulk. Partnering with competitors may not seem intuitive at a time when competition for customers is heating up, but Gegenwart said concerted buying efforts could result in lower prices from suppliers. While he hasn’t seen companies start to do this year, “it absolutely makes sense,” he said, adding that he expects to see this happen by next year.

Companies also are taking extra steps to reassure their customers about their quality, dependability and — the latest big buzzword — “bankability.” For example, Signet Solar in May began offering insurance for its panels in partnership with Munich Re and Marsh. Insurance-backed warranties guarantee the panels even if the solar-manufacturing company were to go out of business, and can help project developers get financing.

Many also are helping their customers lobby for solar-favorable policies and providing other services to help keep their customers loyal. For example, Sharp’s strategy isn’t to rely on having the lowest price, though it also is lowering prices, but also to trade in on its reputation — it’s been in the solar business for 50 years and been in business for 100 years — as well as the services it provides for its customers. The company is “insured up the hilt,” said Ron Kenedi.

Jenny Chase, lead solar analyst for London-based research firm New Energy Finance, suggests that customers will make decisions based on more than just price. She expects to see a range of prices depending on panel efficiencies, as well as manufacturers’ reputations and the perceived risk of buying from them.