More
Home Solar PV industry pricing: The good, the bad, and the confusing 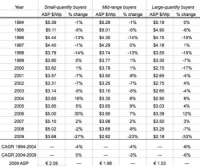 Until certain conditions are met in manufacturing and business models, the PV industry will have no control over its price structure — and will be forced to accept lower margins so long as demand remains incentive-driven, warns Paula Mints of Navigant Consulting.

April 21, 2010 – The PV industry has a history of constrained margins and unprofitability on the technology side. It often seems as if the only control a manufacturer has over pricing lies in its willingness to lose money. 2009 was an extremely difficult competitive pricing environment for technology manufacturers, in particular for most thin-film manufacturers, who typically must price product below that of higher-efficiency crystalline.

At the beginning of 2009, significant inventory on the demand side along with sluggish demand (global recession and stagnant debt markets) led to slow or no sales for technology manufacturers. Demand side participants (system integrators, installers, and distributors, among others) began off-loading inventory at extremely low prices forcing manufacturers to compete with their own products in the market. Manufacturers from all regions lowered prices to compete, and in mid-2009, as sales began to recover, competitors from China and Taiwan began to price aggressively for share, pushing margins down even further. 2008’s strong demand drove prices way up only to come crashing down in 2009.

Currently wafer ASPs are increasing with stronger increases announced. Demand for mono wafers in particular is extremely strong. Wafer ASPs are currently $1.00/Wp, with ~10% increases expected. This is driven by extremely strong demand in Germany, Italy, and the Czech Republic for solar products. These increases will trickle up to the cell and module manufacturers eventually, increasing prices at all points in the value chain and easing pricing pressure for thin films.

Trends in PV pricing — is there such a thing?

Overtime, the most pronounced and longest-running trend in PV cell/module pricing is to aggressively reduce margin (occasionally into the negative range) and price to gain share. The PV industry is, essentially, a volume business. Table 1 presents module prices from 1994-2009, and ASPs by buyer category, for all technologies and also, technology sold as a cell and/or a module. Small quantity buyers typically have little or no buying power and buy in quantities <5MWp annually. Mid-range buyers exert some control over prices, but still do not buy in quantities that enjoy volume discounts (typically, 5MWp to 25MWp annually). Large-quantity buyers exert the strongest influence over prices. In years of strong demand and generous (sometimes overly so) incentives, where pricing for share is not a variable, all categories pay higher prices. In years where pricing for share is a variable, the downward pricing trend will cross all categories to some degree. In general, small buyers pay more and large quantity buyers pay the least.

Particular to the PV industry is the difficulty of developing a sustainable pricing strategy in an incentive-driven industry. Regarding this last point, until the total manufacturing cost of the technology falls to the point where a comfortable cushion can be maintained alongside an acceptable market price, and until the balance-of-systems (BoS) becomes streamlined to the degree that it is more efficient and less costly, and until business models mature that take the high cost of installing solar out of the hands of consumers (financing is a particular need), the PV industry will have no control over its price structure.

Can thin films get a break?

The area penalty experienced by thin films refers not only to the actual area required for system installation; it also refers to the hardware necessary to install it. The thin-film efficiency deficit, compared to crystalline technologies, pushes the price point for thin films in the market below that of the large quantity buyer ASP category. Unfortunately, for most thin-film manufacturers (the exception is First Solar), periods of significant competitive pricing for share provide a painful margin burden.

Table 2 offers a comparison of thin-film pricing in current dollars from 2004 to 2009, along with large-quantity ASPs — which includes thin-film pricing, but is heavily weighted by crystalline technologies (>80%). Over time and given differing market conditions, there is a 10%-15% difference in price on average for thin films.

So, in 2009, PV technology (cells and modules) shipments increased by 44% while revenues decreased by 16% — sell more, make less. Unfortunately, in an incentive-driven industry (95% of sales are stimulated by incentives) with significant downward price pressure, it ultimately becomes a volume game. Figure 1 illustrates long-term cell and module revenues by region over a 10-year period (1999-2009). The US experienced the weakest compound annual revenue growth (CAGR) of the four regions, at 17%. Globally, cell and module revenues grew at a CAGR of 37%. The ROW region includes, Malaysia, the Philippines, India, Australia, China and Taiwan.

Figure 3 compares regional revenues in 2008 and 2009, providing another dismal view of a margin constrained 2009. Even for manufacturers in the ROW region, which considered altogether shipped 61% of total product in 2009, and with regional shipments that grew by 120% over the previous year, had revenue growth of only 13% over 2008.

There is no getting around it — as long as demand in the PV industry remains incentive driven it will be forced into accepting lower margins in order to meet the promises it has made over time in this regard. Governments simply expect the industry to continue on a downward pricing curve that may or may not be sustainable. Solar technologies have clean energy (not to mention reliability) attributes that are worth more than the admittedly high up-front cost of installation.