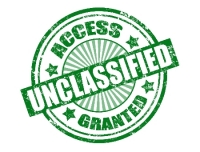 Shocking though it may be, outsourcing is commonplace in the PV industry. Basically, with outsourcing Manufacturer A buys cells or modules from Manufacturer B and both report the outsourced product as in-house production. Outsourcing, which, pardon the cliché, is as old as the hills, has led to a systematic oversizing of the photovoltaic industry. The practice of oversizing also includes module assembler production – referring to module assemblers who do not develop or manufacturer photovoltaic technology in-house. Again, outsourcing is common to all industries that manufacture widgets of any type, and has been practiced by the photovoltaic industry for its entire kilowatt-to-gigawatt size history.

Outsourcing is an open secret in the PV industry. It is specific to the crystalline sector, practiced by most (if not all) manufacturers and widely denied by everyone. The rush to sell more, grow larger, and be recognized as shipping or producing the most technology has led to a high degree of secrecy as to who actually made what. This makes counting annual shipments difficult and simply reporting the production figures that companies provide much easier. “Ask and repeat” is the mantra concerning annual production and shipment figures. Forecasts, of course, are based on trends established over time. A forecast based on double counting is likely to be quite robust, misleading, and in an industry were success means lower incentives, dangerous.

The business size of an industry is the amount of the product shipped to the first point of sale (first buyer) and the revenues resulting from these shipments. As previously stated, in PV the first buyer can be another manufacturer. As the industry size has increased, the practice is not necessarily more common, it just involves larger amounts of technology. The secondary market, anything past the first point of sale, is something different, as are installations, etc. For many years the PV industry has been chasing a success that has driven it into or to the edge of bankruptcy. Figure 1 presents PV industry metrics for 2011 into 2012. 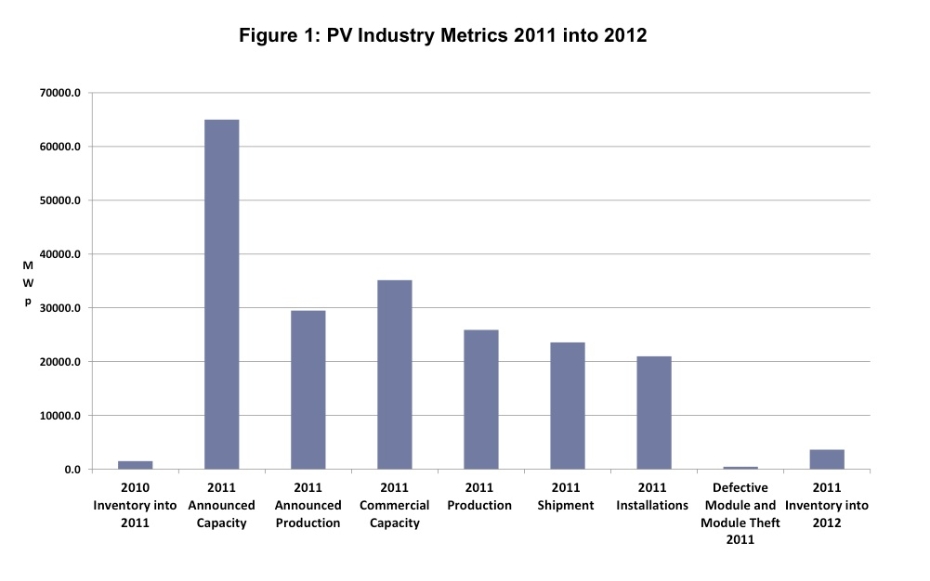 Previous promises to grow ever larger while costs and prices decline rapidly and in conjunction have seemingly been kept … but oh the cost of those promises. For most of its history the PV industry and its observers and stakeholders have described success in terms of ever larger shipments. Bigger has been considered better whether or not it resulted in profits. In 2011, PV manufacturers began to lose money and fail with these failures continuing into 2012. The current correction and the accompanying consolidation is painful to watch, but much more painful to experience as it brings with it the loss of true expertise and innovation. Figure 2 presents revenues for the PV industry from 2001 through the 2016 forecast. 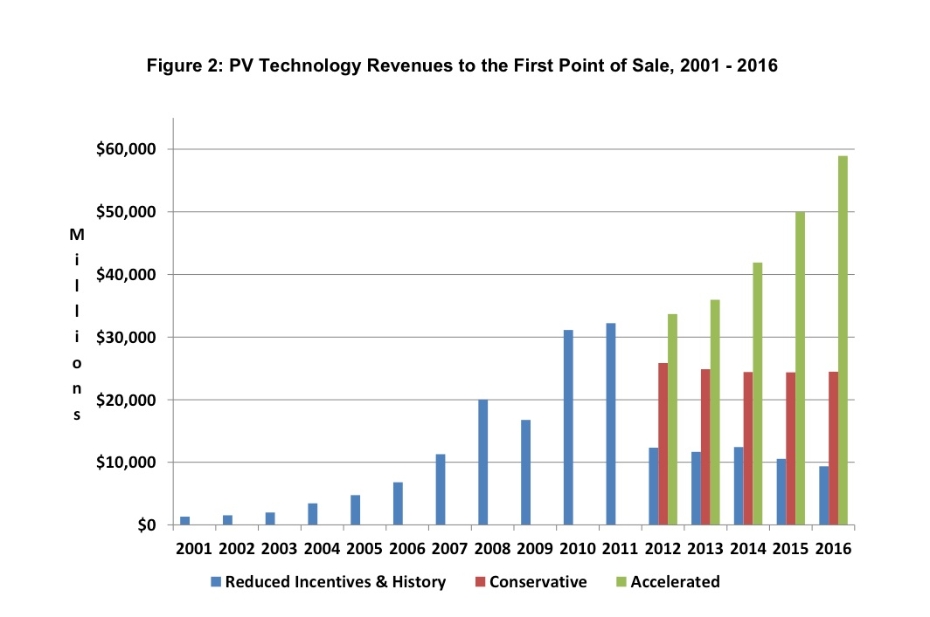 It seems as if overnight the reluctance to admit to outsourcing has disappeared. The reason for this is certainly not altruistic, nor does it spring from a sudden desire to right-size the industry. A clause in the current US tariff on imported PV technology from China has a loophole. Basically, modules from China with cells from somewhere else (typically Taiwan) do not pay the tariff. Suddenly companies that previously denied – vigorously in most cases and as if the very idea of buying cells or modules from another manufacturer and rebranding them had never occurred to them – are now stating that every module sold into the US had cells from Taiwan inside of it. This should be very good for cell manufacturers in Taiwan. It should also make everyone wonder … just what is the true size of the PV industry? This is not just a good question for 2012, it should be asked for past years too.

Market research is a specific discipline that requires that widgets (or whatever is being counted) be counted a specific way. That is, from point A to the first point it stops, and then to the next point, and then to the next point. At the end, you should have a roadmap that describes industry behavior very specifically so that an industry’s behavior is clear and so that decisions can be made. This is always difficult, for every industry, not just PV. Believing that exponential growth will be never ending is not healthy, particularly for an industry with traditionally low margins and now, a traffic pile up of failures.

The photovoltaic industry develops and manufactures a clean, high quality, reliable and low-maintenance DG technology for which the fuel is free. For doubters, everything requires maintenance and this is an unavoidable fact of all technologies. Future advances for PV will come from balance of systems innovation along with innovation in system design and deployment. The PV industry should also consider focusing on its high quality and reliability instead of being the cheapest source of electricity. After all, if you want an energy source that lasts over 25 years you are not really talking about something that is cheap.

In the meantime, now that the non-secret of outsourcing is temporarily out in the open, it is time to right size the industry and focus on its recovery, continuing innovation, and deployment. For the future, hopefully it will be remembered that bigger ain’t always better.