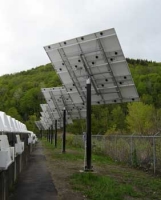 Massachusetts and New Jersey [RenewableEnergyAccess.com] The use of solar energy to offset the power required at wastewater treatment plants has proven an increasingly noticeable application of solar on-site generation. This week a facility in Massachusetts finalized its 14.5 kW array of solar trackers, while down in New Jersey, the finishing touches are being put on a vast, half-MW project.

In Charlemont, Massachusetts, along the banks of the Deerfield River in a quiet corner of the state; the town’s Sewer District now has the power of the sun providing clean electricity to its main filtration facilities. With the help of a financial incentive award from the Massachusetts Renewable Energy Trust, the Commissioners of the Charlemont Sewer District recently installed a 14.5 kW solar PV system near its filtration beds. High atop eight metal poles are 96 panels that capture and convert the sun’s energy to electricity that is then used to power the large pumps, motors, and the lights used by the Sewer District. It all operates silently, in parallel with the conventional utility grid. “Our wastewater treatment plant in effect has been turned into a local distributed power generator,” said Dawn Peters, plant manager. “Using the sunlight in this way shows that renewable, clean energy resources are here; they are real, and they work. We hope that this system shows everyone in our community, and others in the northeast, how solar power can benefit them.” Pioneer Valley Photovoltaics installed the system in conjunction with a grant program offered by the Commonwealth of Massachusetts. The Massachusetts Renewable Energy Trust is promoting the use of solar and other clean forms of energy, implementing state policy that encourages the early adoption of photovoltaic systems. “It takes a lot of electric energy to clean municipal wastewater before it can be safely returned to the environment,” said Philippe Rigollaud, Senior Designer and Installer for Pioneer Valley Photovoltaics. “The solar energy system we have designed and installed for Charlemont provides the Sewer District with a reliable, locally-owned electric generation system. Down in New Jersey — and thanks to best-in-the-nation solar rebates — a much larger project is also going to tap the sun to provide power to a wastewater treatment plant. On October 11 at 2 pm, New Jersey American Water will debut the state’s largest ground-mounted solar electric system at its Canal Road Water Treatment Plant in Somerset, New Jersey. The company is the state’s largest water utility serving over two million people in 176 communities throughout the state. The 500 kW ground-mounted system was designed and built by Dome-Tech Solar and includes more than 2,800 solar panels from RWE Schott Solar (soon to be simply Schott Solar). New Jersey American Water expects it will be able to supplement 15 percent of the peak usage power needed to run the plant with solar energy and save approximately $125,000 a year in reduced energy costs. During peak production periods, the electricity produced by the solar system would be enough to meet the average electricity demand of more than 500 NJ homes. New Jersey’s strong solar rebates are undoubtedly the major catalyst for the massive system. “The solar rebate that the NJBPU is providing the company – almost 60 percent of the project’s cost – will help advance solar technologies that lower energy costs, reduce peak load and serve as an investment in the health and environment of Garden State residents for years to come,” said New Jersey Board of Public Utilities President Jeanne M. Fox.