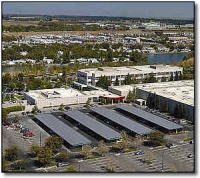 The 573,000-square-foot mail facility is a major U.S. Postal Service hub in Northern California, employing more than 1,200 people and processing 8 to 10 million pieces of mail daily. Chevron Energy Solutions, a ChevronTexaco subsidiary, developed the energy project, which included a solar photovoltaic (PV) system mounted on a new parking structure; energy-efficient lighting systems; heating, cooling and ventilation systems; air compressors; and energy management controls. The 403 kW solar electric system, designed and built by PowerLight Corporation, is the largest solar PV installation at a USPS facility. Covering nearly 28,000 square feet, the solar generation system takes advantage of an unused asset, the parking lot, to generate clean power for the facility as well as shade and protection for 180 vehicles. According to PowerLight, the energy improvements will reduce the USPS facility’s annual electricity purchases by more than US$615,000 and lower its power consumption by more than 33 percent. They also will lower natural gas use by about 43,000 therms per year. Together these reductions translate to avoided local electric utility emissions of about 3,900 tons of carbon dioxide annually, the equivalent of planting 1,100 acres of trees. The project’s completion was celebrated at an event held in the shade of the solar-paneled parking canopy, and attended by USPS and other government officials. “Energy conservation and the use of renewable energy are a growing part of USPS operations nationwide,” said Ray Levinson, USPS’s interim national environmental program manager. “This project is an important step towards our goal of operating our facilities as energy-efficiently as possible. It’s also timely, as October is Federal Energy Awareness Month.” The total cost of the project was funded entirely through energy savings and utility rebate incentives, requiring no contribution from USPS’s capital budget. “This project clearly demonstrates that a major facility can conserve energy, reduce energy costs and benefit the environment without having to divert capital resources from other critical needs,” said Jim Davis, president of Chevron Energy Solutions. “It’s a successful model that works.” The solar portion of the project is on track to receive a $1.6 million rebate from PG&E’s self-generation incentive program. In addition, the Postal Service is on track to receive a PG&E rebate of up to $300,000 for energy efficiency improvements made at the facility. The West Sacramento project is part of a larger USPS contract with Chevron Energy Solutions to install energy efficiency improvements at eight mail facilities in northern California, including facilities in Stockton, Marysville, Vacaville, Colfax and Winters. Together, these improvements will save the Postal Service an anticipated $800,000 a year in energy costs. This is hardly the first renewable energy or green building project for the USPS. Since 1985 USPS has reduced its energy consumption nationally by more than 20 percent, installed solar power systems at facilities in California, Colorado, Rhode Island, Texas and Puerto Rico, and begun using geothermal technology to provide heating and cooling at facilities in Oklahoma and Maryland. Over the past year it also dedicated new “green” post offices in Ft. Worth, TX, and Corrales, NM, and completed energy efficiency upgrades at two facilities in Memphis, TN. In addition, the USPS operates 30,000 alternative fuel vehicles (AFVs) — the largest AFV fleet in the nation, using ethanol, compressed natural gas and electricity.