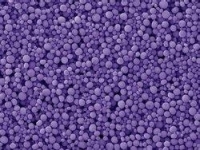 Washington, United States [RenewableEnergyWorld.com] A dramatic improvement in the efficiency rates of dye-sensitized solar cells (DSC) has been discovered in Washington. Researchers at the University of Washington (UW) have found that by using a popcorn-ball design — tiny kernels clumped into much larger porous spheres — they have the ability to manipulate light and more than double the efficiency of converting solar energy to electricity.

“We think this can lead to a significant breakthrough in dye-sensitized solar cells,” said researcher Guozhong Cao, a UW professor of materials science and engineering.

Dye-sensitized solar cells, invented by Michael Grätzel and Brian O’Regan in 1991, are more flexible, easier to manufacture and cheaper than existing solar technologies. Researchers have tried to increase efficiencies by varying the surfaces of the cells, making them rougher, and have achieved higher and higher efficiencies. Current lab prototypes can convert just over one tenth of the incoming sun’s energy into electricity. This is still only about half as efficient as the commercial, silicon-based cells used in rooftop panels and calculators.

The thin light-absorbing film is made of zinc oxide about 10 micrometers (10,000 nanometers) thick. This image was taken using a scanning electron microscope.

One of the main quandaries in making an efficient solar cell is the size of the grains. Smaller grains have bigger surface area per volume, and thus absorb more rays. But bigger clumps, closer to the wavelength of visible light, cause light to ricochet within the thin light-absorbing surface so it has a higher chance of being absorbed.

A closer image of the film shows that it is composed of tiny balls.
Each ball is about 300 nanometers across.

“You want to have a larger surface area by making the grains smaller,” Cao said. “But if you let the light bounce back and forth several times, then you have more chances of capturing the energy.”

Other researchers have tried mixing larger grains in with the small particles to scatter the light, but have had little success in boosting efficiency. The UW group instead used only very tiny grains, about 15 nanometers across. (Lining up 3,500 grains end to end would equal the width of a human hair.) Then they clumped these into larger agglomerations, about 300 nanometers across. The larger balls scatter incoming rays and force light to travel a longer distance within the solar cell. The balls’ complex internal structure, meanwhile, creates a surface area of about 1,000 square feet for each gram of material. This internal surface is coated with a dye that captures the light.

A close-up of a single ball, taken with a scanning electron microscope.
The 300-nanometer sphere is large enough to scatter light. But its insides
are made of tiny grains just 15 nanometers across.

The researchers expected some improvement in the performance but what they saw exceeded their hopes.

“We did not expect the doubling,” Cao said. “It was a happy surprise.”

The overall efficiency was 2.4 percent using only small particles, which is the highest efficiency achieved for this material. With the popcorn-ball design, results showed an efficiency of 6.2 percent, more than double the previous performance.

“The most significant finding is the amount of increase using this unique approach,” Cao said.

The experiments were performed using zinc oxide, which is less stable chemically than the more commonly used titanium oxide but easier to work with.

The research was funded by the National Science Foundation, the Department of Energy, Washington Technology Center and the Air Force Office of Scientific Research.

Hannah Hickey is a science writer in the University of Washington’s Office of News and Information.