In an effort to better understand what persuades people to buy photovoltaic (PV) systems for their homes, researchers at Sandia National Laboratories are gathering data on consumer motivations that can feed sophisticated computer models and thus lead to greater use of solar energy.

A primary goal of the project is to help increase the nation’s share of solar energy in the electricity market from its current share of less than .05 percent to at least 14 percent by 2030. This is the second year of a three-year effort.

“If we can develop effective and accurate predictive models, we can help identify policy variables that could increase purchases of residential PV systems and ultimately help advance the mission of the SunShot Initiative,” said Kiran Lakkaraju, Sandia’s project lead. Specifically, he said, an effective model of solar purchase dynamics can be used to predict and even influence consumer purchasing decisions. 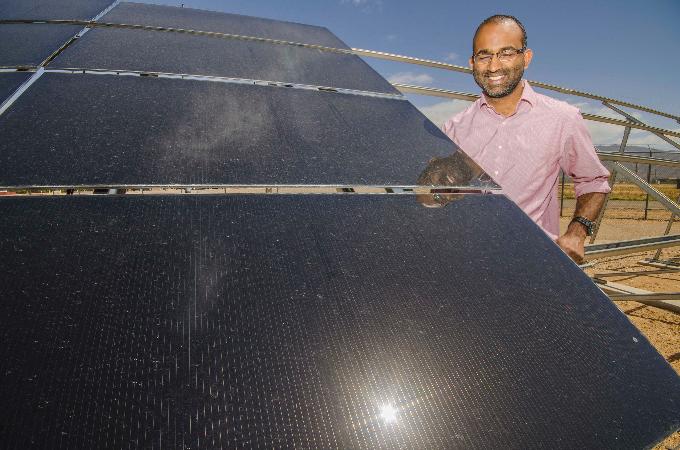 Sandia National Laboratories researcher Kiran Lakkaraju leads a modeling project that supports the goals of the Department of Energy’s SunShot Initiative. The work aims to create a model that predicts household solar energy system purchases based on such variables as price, energy savings, environmental concerns and other factors. Photo by Randy Montoya.

The modeling project, part of the Solar Energy Evolution and Diffusion Studies(SEEDS) program, is one of many activities in the Energy Department’s SunShot Initiative, which seeks to make solar energy cost-competitive with other forms of electricity. SEEDS projects are designed to investigate methods for transforming the operations of solar researchers, manufacturers, developers, installers and policymakers.

The projects will be discussed at a May 22 workshop at the Department of Energy’s SunShot Grand Challenge Summit. The event takes place May 19-22 in Anaheim, Calif.

Working with project partners at the National Renewable Energy Laboratory (NREL) and the California Center for Sustainable Energy (CCSE), project researchers are conducting surveys of consumers in San Diego County, including 1,000 respondents who have bought PV systems and another 1,000 who have not. Data from the surveys will be studied by Sandia and Vanderbilt University quantitative modeling experts and fed into modeling tools.

Additional data is being collected for the Sandia project via a field experiment conducted by collaborator The Vote Solar Initiative, which will analyze how consumers respond to economic incentives, discounts and even peer effects when friends, family or co-workers purchase PV systems. 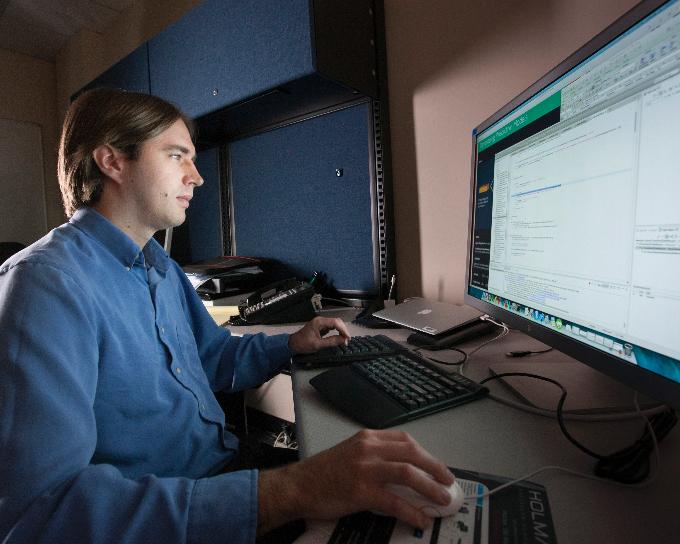 Sandia National Laboratories researcher Joshua Letchford processes survey data gathered from a sampling of both San Diego photovoltaic adopters and those who have not yet adopted in that region. The questions on the surveys were influenced by the results from the initial predictive models and touch on issues such as environmental awareness, energy independence and information about life events. Photo by Randy Montoya.

Another experiment, conducted online byThe Wharton School at the University of Pennsylvania, is exploring how the framing of messages can influence whether consumers will invest the time to learn more about installing PV systems. Researchers will examine how different demographic segments are influenced by messages and will study the influence of such issues as environmental awareness, energy independence, information about life events and how messages are received.

Other predictive variables, including the square footage of homes, the national unemployment rate and even seemingly inconsequential factors, such as whether consumers own a swimming pool, are also part of the models.

“We’re essentially creating a model that predicts household solar energy system purchases based on such variables as price, energy savings, environmental concerns and other factors,” said Lakkaraju. “But then we’re also running experiments that feed results back into the model. We have a cycle where we use the model to test and generate hypotheses about solar panel purchases, but then we test these hypotheses through experiments to improve the model.”

The team also is investigating novel financing structures that go beyond straightforward “purchases,” such as third-party ownership through leasing or power purchasing agreements. These aren’t strictly purchases yet are seen as key to the industry’s growth, Lakkaraju said.

The research team will test their modeling tools, recommendations and draft guidance on using the models in additional field experiments.

“The significance of this work is that it will help identify those likely to purchase PV systems and help forecast future market trends,” said Lakkaraju. “Ultimately, it will help those in the solar industry to more effectively bring solar energy to consumers.”