Conferences are intense. They have hundreds of booths, thousands of products, and tens of thousands of people. Cram that into the Moscone Center in San Francisco; add dozens of panel discussions and parties, mix for four days and you get Intersolar North America 2012. 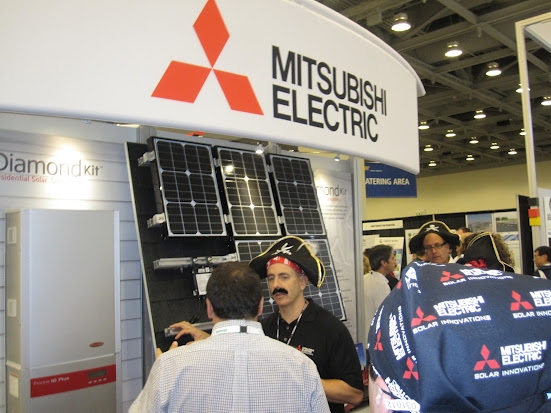 Each exhibitor spends thousands of dollars to attract visitors, give their pitch, collect client information, and ultimately generate leads. In the solar industry, companies have to work particularly hard to explain the points of differentiation of their products as they can be difficult to see with an untrained eye.  With so many people and complex product messaging at the conference, and with so little time to take it all in, Intersolar is a serious marketing battlefield. As with any battle, there are multiple fronts, weapons, and tactics to be used. Each year the competition gets tougher, new fronts are opened, new tactics tried, and new marketing weapons are introduced. This year we saw the introduction of a new set of weapons — pirates and magicians.

The idea of the escalating intensity on the marketing battlefield of solar conferences is best observed on the front of booths. Each year booths get bigger and flashier. Booth design becomes more enticing, inviting you to step in. As the booth front becomes more heated, new marketing weapons are adopted like digital displays, rotating banners that hang from the ceiling and comfortable furniture — anything to make your booth better than the competition. As customer familiarity makes surprising visitors more difficult and outflanking your enemy more costly, new fronts are opened and new tactics adopted.

Recent years have demonstrated how fast this escalation occurs and how quickly specific tactics and marketing weapons can be copied. I have no idea which solar company was the first to offer a coffee bar at their booth in the morning, but I bet they were particularly popular at that conference. But now, it is hard to walk the floor of a solar conference in the morning without being offered a latte. While some may be disheartened to see a great idea of theirs, one which set them apart on the conference floor, get copied so quickly – that is the nature of the battle.

You cannot have sole ownership of a marketing tactic, and there are two main ways to deal with that. One is that you can commit so fully to a tactic that imitators would be embarrassed to copy it flagrantly. In other words, a company cannot have women dressed in traditional Bavarian dirndls serving beer and pretzels at their booth — that’s Schletter’s thing. Schletter’s commitment to that marketing tactic effectively prevents anyone else from using it less they be called out on it.

The other option is to continue to innovate.

So what does this have to do with pirates and magicians?

The human element has always been crucial to successful conference marketing. All else being equal, companies that staff their booths with approachable, energetic, and knowledgeable people will always have a more successful conference than those who do not.  Having booth staff that possesses one or two of those characteristics is better than staffing it with folks who have none, but it is not ideal. Staff and the booth need to educate and engage visitors to cut through the noise and ensure their message sticks. Hiring the attractive but untrained brand ambassador can be just as much of a limitation as staffing your booth with the brilliant but uncharismatic engineer.

Companies like Tigo and Unirac are using presenters as a great new tactic. These are generally well-trained third-party staffers who give a 5-10 minute detailed (but not dull) presentations on the company and products. Generally, they will present every hour or so. This is great because it is engaging, educational, and gives people a chance to sit down for a bit. Look out for a dramatic surge in companies hiring presenters at Solar Power International in September.

Presenters are great, but as we have seen with coffee and banners hung from the ceiling – it is hard to stay ahead of the pack at solar conferences. A visionary tactic at one conference can quickly become standard practice at the next. This is where pirates and magicians come in.

At Intersolar North American 2012, SolarEdge technologies had a magician who did card tricks while their patter was about their power optimizer and inverter solutions. Mitsubishi Electric hosted a pirate themed party with a “treasure hunt,” and clues led participants to learn details about their modules and interact with the sales team in order to win a flat screen TV.

These efforts combined education and fun in an unexpected way making them both engaging and memorable. They drew an audience in, kept them there long enough to slip in some product information, and interacted with them so that the message stuck.

I think presenters are fun, but I also think writing blog posts about solar marketing is fun — so most people might not agree with me on the presenter point. However, treasure hunt parties for flat screen TVs, and magicians who happen to be talking about power optimizers are objectively fun. Dorky, but fun.

By making it fun, you cut through the noise and the information overload and you get visitors excited to be at your booth. By including the product information, you ensure you aren’t just amusing visitors, but are also educating them, which gives them another lead with your sales team. Both elements are crucial to a high quality conference marketing campaign. If people want to be entertained, they go to a show (like Battle of the Bands), and if they want information, they go to a webinar or panel discussion. They come to exhibit halls for both.

Mitsubishi Electric and SolarEdge have laid out a pretty serious challenge by opening up the new Fun/Educational front, and this front is subtly different than the others. Part of what makes innovating on these terms so enticing, is that you cannot be copied. If there were three magicians and two pirate parties at Solar Power International, we would all know that those companies are just copiers. Since combinations of fun and education are so distinctive and memorable, the first mover gets all the credit. Of course there is still plenty of room for variations, other theme parties, other fun and educational performers. Keep in mind, that since the first user of a tactic becomes the owner of it, there is a strong first mover advantage.

To be clear, the other marketing initiatives are still important and effective. Anything a company does beyond having a decently designed booth space, two staffers, and some brochures is great. It takes a lot of effort and planning to execute a successful marketing campaign that captures your audience. Yesterday it was flashier booths, today it is Pirates and Magicians, and tomorrow it will be something new, fun, educational, and effective.

The fierce competition in all aspects of the solar industry — among the rackers, module manufacturers, project developers, inverter solutions providers and everyone else — will continue to stretch the creativity of marketing staffs and agencies. But as the escalation of the last few years has shown, we are up to the task.