New Hampshire, U.S.A. — Barely two months into the new year, we’ve seen a crop of new performance spanning the spectrum of solar cell technologies: thin-film (including CIGS, CdTe, and other), c-Si, some unknown combination, and even some with some nanoscale assistance.

Just in the past couple of weeks we’ve seen numbers trotted out for a different set of solar tech: organic (aka polymer aka plastic) solar cells, approaching and exceeding 10 percent conversion efficiency. That’s a far cry from the high-teens of crystalline silicon or even low-teens for other thin-film options—but it’s a magical number to spur further interest in the technology beyond lab-scale tinkering, notes Keith Emery, who manages NREL’s cell and module performance characterization group. And it’s significant for a technology which promises more simplified manufacturability, and widened applications where rigid modules cannot dream of going, from building integration (BIPV) to niche markets like being sewn onto travel gear.

While breaking through the 10 percent efficiency mark for plastic solar cells is an important milestone, equally important is perspective, notes Emery. It’s one thing to make them harvest energy and conduct electricity, but it’s another thing to make them stable (inconveniently, “these things are unstable in air and water,” he notes) and then another to figure out how to package them into a commercial-scale alternative. Thin-film solar tech options such as copper-indium-(gallium)-selenide (CIS/CIGS) similarly boast the option to be made flexible, but as yet it hasn’t worked out at a commercial scale; CIS still gets rigidly sandwiched between glass. “It’s not a done deal to compete with costs because of packaging needs,” he emphasizes.

Still, while commercial-scale power generation from polymer solar cells may be years away (if ever), there could be lower-hanging fruit: powering consumer electronics devices, where efficiency and stability are less of a concern. Assuming the technology adopts improved packaging and maintains its simplified manufacturability, it should be attractive enough to power all sorts of personal gadgetry. (CIS technology got its start in the early 1980s on solar calculators, Emery points out.) Few digital gadgets last longer than a few years before being upgraded out of necessity or more likely must-have-it-ness — no 20-year warranty or PPA required. 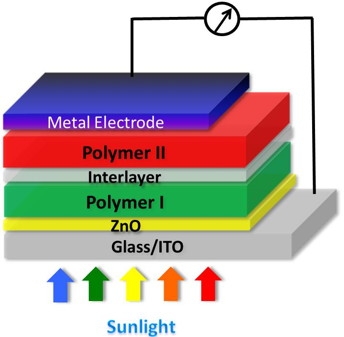