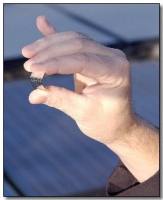 Atlanta, Georgia [RenewableEnergyAccess.com] Silicon step aside, researchers are making advances with organic solar cells all the time. Scientists started experimenting with the conversion efficiencies of pentacene, which forms a crystalline organic film, at least five years ago because the substance offered a cost effective conductor for photovoltaic uses. Unfortunately, researchers couldn’t match the efficiency of a silicon cell.

At the Georgia Institute of Technology (Georgia Tech), however, researchers have paired pentacene with C60, a form of carbon found in cells that is more popularly known as “buckyballs”. Previous attempts by other groups using pentacene in solar cells combined the material with metals, rather than an organic molecule like C60. “The metal-pentacene cells had very low efficiencies,” said Bernard Kippelen, professor in the Center for Organic Photonics and Electronics at Georgia Tech. “We decided we would pair out pentacene with an organic molecule because such a combination could generate larger currents.” Kippelen and his fellow researchers Seunghyup Yoo and Benoit Domercq were able to push the power conversion efficiencies of pentacene from 2.7 percent to 3.4 percent by changing the mix from metal to an organic molecule. The team published a research paper in the November 29, 2004 issue of the journal Applied Physics Letters. What makes pentacene such a good material for organic solar cells by itself is that, unlike many of the other materials being studied for use in these cells, it’s a crystal, Kippelen said. The crystal structure of atoms joined together in a regular pattern makes it easier for electricity to move through it than some other organic materials, which are more amorphous. Once fully developed, organic solar cells could revolutionize the power industry. Their flexibility and minimal weight will allow them to be placed on almost anything that might need a power supply. The solar cells are still at least five years away from residential applications, said Kippelen, but he estimated that the pentacene cells should be ready to use in smaller devices, such as RFID tags used to control inventory, within two years. Kippelen and other professors at the Center for Organic Photonics and Electronics started LumoFlex, a spin-off company based at Georgia Tech, to capitalize on the commercial applications of the research. Research into pentacene solar cells at Georgia Tech was funded by the National Science Foundation, the Office of Naval Research and the National Renewable Energy Laboratory.