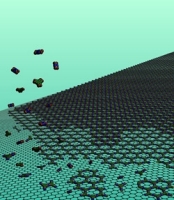 April 15, 2011 — Solar cells made from organic materials are inexpensive, lightweight and flexible, but their performance lags behind solar cells that contain silicon or other inorganic materials. Cornell chemist William Dichtel and colleagues have found a way to synthesize ordered organic films that could be a major step toward solving this problem.

It’s the first time researchers have been able to coax materials known as covalent organic frameworks (COFs) out of their common powdered form into flat sheets of precisely ordered molecules on a conductive surface.

COFs have a variety of properties that are not found in traditional organic polymers, including excellent thermal stability, high surface area and permanent porosity. But while researchers have identified them as intriguing candidates for such devices, they have been hamstrung by the fact that the materials normally exist only as insoluble powders.

Dichtel, assistant professor of chemistry and chemical biology, and colleagues developed a simple process for growing 25-400nm-thick films of COFs on a surface of graphene. They used X-ray diffraction at the Cornell High Energy Synchrotron Source (CHESS) to determine the materials’ structure and orientation. The COFs grow as continuous films of well-ordered, stacked layers on the graphene surfaces.

Unlike the powder form, the films grown on transparent surfaces can be probed using modern optical measurements. Researchers can also vary the properties of the frameworks by altering the structure of their components.

“These materials are so versatile — we can tune the properties rationally, rather than relying on molecules to pack into films unpredictably,” Dichtel said.

To demonstrate, the researchers created three variations of the frameworks. Of the three, one shows particular promise for solar cells — it uses molecules called phthalocyanines, which are commonly found in industrial dyes used in products from blue jeans to ink pens, but have been investigated for dye sensitized solar cells before.

Phthalocyanines, which are related to chlorophyll, absorb light over most of the solar spectrum — a rare property for a single organic material.

“Obtaining these materials as films on electrode materials is a major step toward studying and using them in devices,” Dichtel said. “This method represents a general way to assemble molecules on surfaces predictably. This work opens the door to take these materials in many other directions.”

The research appears in the April 8 issue of Science. Access it here: http://www.sciencemag.org/content/332/6026/228.short It was funded by Cornell and the National Science Foundation.